Methanogenesis from Mineral Carbonates, a Potential Indicator for Life on Mars

Priorities for the exploration of Mars involve the identification and observation of biosignatures that indicate the existence of life on the planet. The atmosphere and composition of the sediments on Mars suggest suitability for anaerobic chemolithotrophic metabolism. Carbonates are often considered as morphological biosignatures, such as stromatolites, but have not been considered as potential electron acceptors. Within the present study, hydrogenotrophic methanogen enrichments were generated from sediments that had received significant quantities of lime from industrial processes (lime kiln/steel production). These enrichments were then supplemented with calcium carbonate powder or marble chips as a sole source of carbon. These microcosms saw a release of inorganic carbon into the liquid phase, which was subsequently removed, resulting in the generation of methane, with 0.37 ± 0.09 mmoles of methane observed in the steel sediment enrichments supplemented with calcium carbonate powder. The steel sediment microcosms and lime sediments with carbonate powder enrichments were dominated by Methanobacterium sp., whilst the lime/marble enrichments were more diverse, containing varying proportions of Methanomassiliicoccus, Methanoculleus and Methanosarcina sp. In all microcosm experiments, acetic acid was detected in the liquid phase. Our results indicate that chemolithotrophic methanogenesis should be considered when determining biosignatures for life on Mars. View Full-Text
Keywords: methanogenesis; carbonate; biosignature methanogenesis; carbonate; biosignature
►▼ Show Figures 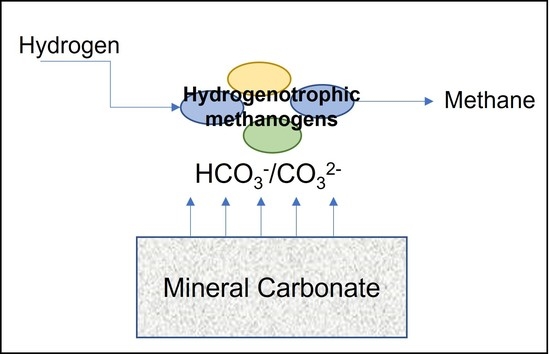