A Step towards a Sustainable Tourism in Apennine Mountain Areas: A Proposal of Geoitinerary across the Matese Mountains (Central-Southern Italy)
Previous Article in Journal

Age of the Most Extensive Glaciation in the Alps

Soil Formation and Mass Redistribution during the Holocene Using Meteoric 10Be, Soil Chemistry and Mineralogy

Soil development and erosion are important and opposing processes in the evolution of high-mountainous landscapes, though their dynamics are not fully understood. We compared soil development between a calcareous and a siliceous chronosequence in the central Swiss Alps at high altitudes, which both cover soil formation over the Holocene. We calculated element mass balances, long-term erosion rates based on meteoric 10Be and we determined the rates of soil formation. We also analyzed the shifts in the mineralogical composition, weathering indices, the particle size distribution, carbon stocks and oxalate extractable Fe, Al, and Mn. The siliceous soils had high chemical weathering rates at the early stage of soil formation that strongly decreased after a few millennia. The development of calcareous soil was characterized by high carbonate losses and a shift to finer soil texture. Soil erosion hampered the upbuilding of soil horizons in the early stages of soil development, which led to a delay in soil and vegetation development. This study shows how soil formation drivers change over time. In the early stages of soil development, the parent material predominantly drives soil formation while at later stages the vegetation becomes more dominant as it influences surface stability, hydrological pathways, and chemical weathering that determine water drainage and retention. View Full-Text
Keywords: soil forming factors; cosmogenic nuclides; chronosequences; high-mountain soils; proglacial areas soil forming factors; cosmogenic nuclides; chronosequences; high-mountain soils; proglacial areas
►▼ Show Figures 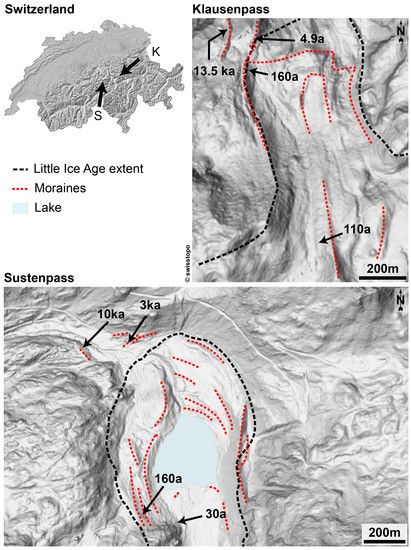