The identification of underwater landforms represents an important role in the study of the seafloor morphology. In this context, the segmentation and characterization of underwater dunes allow a better understanding of the dynamism of the seafloor, since the formation of these structures is directly related to environmental conditions, such as current, tide, grain size, etc. In addition, it helps to ensure safe navigation, especially in the context of navigation channels requiring periodic maintenance. This paper proposes a novel method to automatically characterize the underwater dunes. Its originality relies on the extraction of morphological descriptors not only related to the dune itself, but also to the fields where the dunes are located. Furthermore, the proposed approach involves the entire surface of the dunes, rather than profiles or group of pixels as generally found in previous works. Considering the surface modelled by a digital bathymetric model (DBM), the salient features of the dunes (i.e., crest line, stoss trough, and lee trough) are first identified using a geomorphometric analysis of the DBM. The individual dunes are built by matching the crest lines with their respective troughs according to an object-oriented approach. Then, a series of morphological descriptors, selected through a literature review, are computed by taking advantage of the dune salient features, surface representation, and spatial distribution in the fields where they are located. The validation of the proposed method has been conducted using more than 1200 dunes in the fluvio-marine context of the Northern Traverse of the Saint Lawrence River. View Full-Text
Keywords: underwater dunes; dunes characterization; dune descriptors; hydrospatial; seafloor morphology underwater dunes; dunes characterization; dune descriptors; hydrospatial; seafloor morphology
►▼ Show Figures 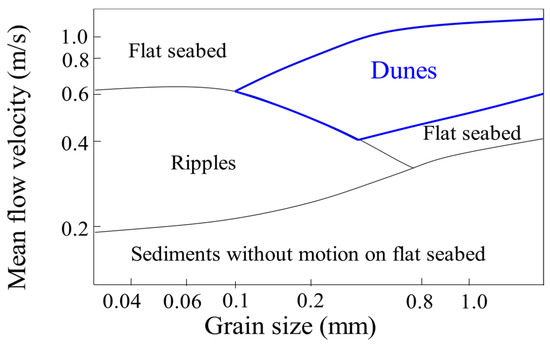