The Cenozoic Malaguide Basin from Sierra Espuña (Internal Betic Zone, S Spain) due to the quality of outcropping, areal representation, and continuity in the sedimentation can be considered a key-basin. In the last 30 years, a large number of studies with very different methodological approaches have been done in the area. Models indicate an evolution from passive margin to wedge-top basin from Late Cretaceous to Early Miocene. Sedimentation changes from limestone platforms with scarce terrigenous inputs, during the Paleocene to Early Oligocene, to the deep basin with huge supplies of turbidite sandstones and conglomerates during the Late Oligocene to Early Miocene. The area now appears structured as an antiformal stack with evidence of synsedimentary tectonics. The Cenozoic tectono-sedimentary basin evolution is related to three phases: (1) flexural tectonics during most of the Paleogene times to create the basin; (2) fault and fold compartmentation of the basin with the creation of structural highs and subsiding areas related to blind-fault-propagation folds, deforming the basin from south to north during Late Oligocene to Early Aquitanian times; (3) thin-skin thrusting tectonics when the basin began to be eroded during the Late Aquitanian-Burdigalian. In recent times some works on the geological heritage of the area have been performed trying to diffuse different geological aspects of the sector to the general public. A review of the studies performed and the revisiting of the area allow proposing different key-outcrops to follow the tectono-sedimentary evolution of the Cenozoic basin from this area. Eight sites of geological interest have been selected (Cretaceous-Cenozoic boundary, Paleocene Mula Fm, Lower Eocene Espuña-Valdelaparra Fms, Middle Eocene Malvariche-Cánovas Fms, Lowermost Oligocene As Fm, Upper Oligocene-Lower Aquitanian Bosque Fm, Upper Oligocene-Aquitanian Río Pliego Fm, Burdigalian El Niño Fm) and an evaluation has been performed to obtain four parameters: the scientific value, the educational and touristic potential, and the degradation risk. The firsts three parameters obtained values above 50 being considered of “high” or “very high” interest (“very high” in most of the cases). The last parameter shows always values below 50 indicating a “moderate” or “low” risk of degradation. The obtained values allow us considering the tectono-sedimentary evolution of this basin worthy of being proposed as a geological heritage. View Full-Text
Keywords: Sierra Espuña; Cenozoic; wedge-top basin; tectono-sedimentary evolution; geological heritage Sierra Espuña; Cenozoic; wedge-top basin; tectono-sedimentary evolution; geological heritage
►▼ Show Figures 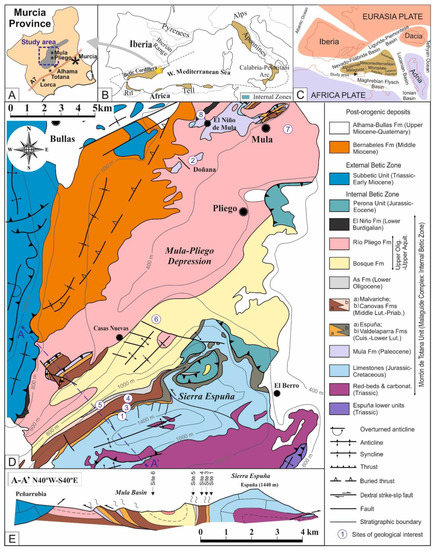