The Effect of Targeted Field Investigation on the Reliability of Earth-Retaining Structures in Passive State: A Random Field Approach
Previous Article in Special Issue

Landslide hazard analyses in Armenia require consideration of the seismotectonic context of the Lesser Caucasus. As it is located near the center of the Arab-Eurasian collision, the Lesser Caucasus is characterized by its complex geology, dense fault network and mountainous relief; it is marked by recent volcanic and seismic activity largely influencing slope stability at different scales. We therefore sought to identify all major landslides in the Armenian Lesser Caucasus and to understand the environmental factors contributing to regional landslide susceptibility. We performed spatial and size-frequency analyses using two landslide catalogues as inputs: “Georisk”, provided by the Georisk Scientific Research Company, and “Matossian”, herein. Our spatial analyses show that landslide susceptibility depends on many factors according to the area considered: near faults, a tectonic influence on slope stability is clearly observable, whereas high concentrations of landslides in northern mountain regions, marked by a wetter climate and far from known active faults, show that climatic factors also strongly contribute to slope-failure potential. The influence of volcanoes and volcanic deposits on the development of mass movements is unclear and requires further analysis. The aforementioned inventories do not include any records of volcanic flank collapses, although we expect at least one case in the eastern Lesser Caucasus. View Full-Text
Keywords: large landslides; two catalogues; spatial distribution; size-frequency analysis; distance to faults; volcanic deposits large landslides; two catalogues; spatial distribution; size-frequency analysis; distance to faults; volcanic deposits
►▼ Show Figures 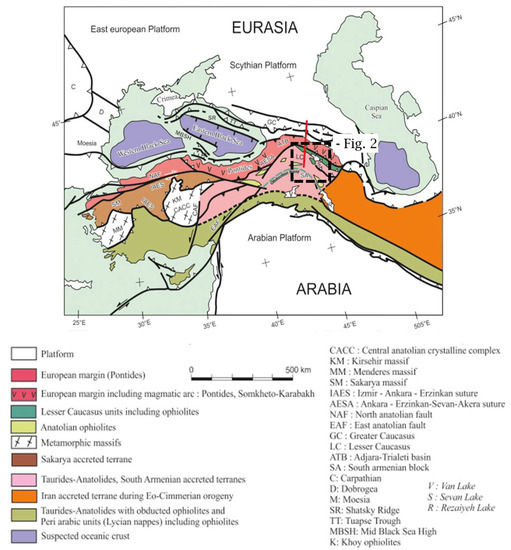