Humans and domestic dogs may alarm wild animals, and the extent of this can be measured using Flight Initiation Distance (FID). Golden marmots are preyed on by globally-endangered predators such as the snow leopard, and are baited by humans with dogs, potentially causing FID to increase. We measured FID in 72 marmots from four colonies in the Karakoram range, Pakistan. Marmots were approached by a person on foot with a leashed dog, and by a person on their own to compare FID between the two. Additionally, we recorded background signs of human activity, namely roads, and presence of people other than the experimenters. We measured other aspects of the environment that might have affected marmot behavior such as marmot group size and age/sex, how visible each colony was, and colony substrate. The dog caused greater FID than the person alone, and adult marmots nearer to roads showed greater FID. However, marmot age and colony substrate had more marked impacts on FID, which was also greater at lower elevations where there were clusters of human settlements and livestock pasture. Further research should be conducted to explore some of these effects further and to find out whether increased FID affects marmot survival and breeding success.

Humans and dogs initiate measurable escape responses in wild animals including flight initiation distance (FID), with potentially negative consequences. Golden marmots are important prey for endangered carnivores and are subject to human persecution including via marmot baiting with dogs. We quantified FID at four marmot colonies (72 individuals) in the Karakoram range, Pakistan in response to approach by a pedestrian with a leashed dog versus approach by a pedestrian alone (i.e., a control). Additionally, we related FID to background variables of human activity, namely proximity to roads, and presence of other pedestrians in the vicinity of study sites during sampling. We also controlled for potential environmental and social covariates (e.g., group size, age and sex, and colony substrate). Dogs initiated greater FID than pedestrians alone, and there was evidence that roads increased FID. However, these effects were weaker than those of marmot age and colony substrate. FID was greater at lower elevations, but this may reflect the clustering in these zones of human settlements and livestock pasture. Further work is needed elucidate the importance of colony substrate (linked to ease of human persecution), the effect of settlements and pasture, and the impact of increased FID on marmot fitness. View Full-Text
Keywords: Flight Initiation Distance; disturbance; domestic dog; marmot; burrow substrate Flight Initiation Distance; disturbance; domestic dog; marmot; burrow substrate
►▼ Show Figures 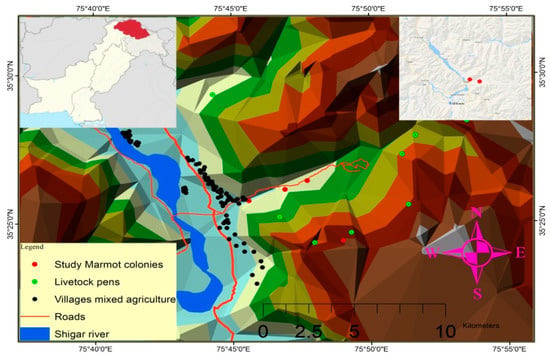