Effects of Enriched Charcoal as Permanent 0.2% Feed-Additive in Standard and Low-Protein Diets of Male Fattening Turkeys: An On-Farm Study
Next Article in Special Issue

The suitability of milk for cheese production is usually predicted at dairy plants using mathematical formulas, which are based on milk protein and fat content. In addition, several methods, which use a small volume of milk to simulate the cheesemaking processes and stages, are currently available at the laboratory level. Those methods have been developed and improved for cow milk. In the present review, the author reports the available literature and current methods to analyze coagulation traits from sheep and goat milk.

The total world production of milk from sheep and goats is constantly growing, and its main industrial use is for cheesemaking [1]. In some geographical areas, such as the Mediterranean Basin, although products are often differentiated in many local varieties, they are characterized by their high quality and are labelled with official designations, which identifies and enhances their specificity [2]. Quality of cheese is linked to characteristics of milk and to cheesemaking technologies. Cheese yield (CY%), which is calculated as the percentage of raw milk that is transformed into fresh curd, measures the efficiency of the cheesemaking process. The CY% is closely related to the concentration of fat and protein [3], and it is therefore predicted on the basis of fat and protein content. The current payment systems for sheep and goat milk in relation to quality must necessarily guarantee compliance with the minimum microbiological characteristics, but those also apply a bonus or a penalty to farmers according to the percentage of fat and protein [4]. Nevertheless, cheese yield and the final quality of the products cannot be solely attributable to the chemical composition of milk. In the past, several mathematical formulas have been developed for the prediction of those characters at the dairy industry level [5]. Although the use of those formulas represents a valid control tool for the dairy industry, laboratory methods can provide a useful and complete overview of the real coagulation process and the achievement of phenotypic data during many steps of the dairy chain.
Milk coagulation can be activated by many types of biochemical and physical processes. The most common coagulating agent at dairy plants is the rennet, which contains the chymosin enzyme. Chymosin starts the primary phase of milk coagulation, the proteolytic phase, breaking down the biochemical bond between the two amino acids phenylalanine and methionine, respectively, at positions 105 and 106 of the κ-casein protein chain. The event causes the destabilization of milk micellar structure. Later, during the secondary phase of coagulation, destabilized micelles precipitate and aggregate into a gel. The cutting of the gel into pieces, which is normally made during the cheesemaking processes, is the starting point of a phenomenon named syneresis, during which the network formed by the aggregated micelles facilitates whey expulsion and finally the formation of the fresh curd [6].
Several techniques have been proposed and used to investigate the phases of milk coagulation, both at industrial and laboratory level. The most common devices are classified as mechanical, which exploit the drag force exerted by the clot; vibrational, based on the use of probes that vibrate in different ways as a response to milk coagulation; and optical, which record the changes of properties, color, and absorbance of milk during the coagulation phases [7]. Among the mechanical devices, the Formagraph instrument (Foss Electric A/S, Hillerød, Denmark) is very common at research and dairy plant laboratories. The Formagraph produces a graphic representation of the coagulation phases (Figure 1) based on the signals transmitted by steel pendula immersed in milk samples mixed with a rennet solution. The pendula record the changes of milk from the liquid to the gel state and the increase of curd firmness and syneresis [8]. The Formagraph method is based on the analysis of a small quantity of milk, 10 mL, and the achievement of the so-called traditional milk coagulation properties (MCPs, Figure 1): The rennet coagulation time (RCT), the curd firming time, k20, and the curd firmness, a30.
The Formagraph method has some weaknesses [9,12]. It provides static phenotypes, which have been called “single-point” traits because those are recorded in a single moment and therefore do not provide the complete description of the coagulation process. In addition, traditional MCPs often show low repeatability, and many samples, for which no coagulation is recorded within the time period of 30 min, are labelled as “non-coagulating” (NC). Another negative aspect of the Formagraph, and in general of all the mechanical devices, is the loss of time, because 30 min are necessary for the recording of the MCPs from 10 milk samples.
Bittante [9] and Bittante et al. [10] proposed an extension of the Formagraph analysis up to 60 min and the elaboration of statistical models to examine the complete dataset extrapolated from the traditional Formagraph layout. Indeed, the instrument records the firmness of milk samples every 15 s for a total of 240 observations during 60 min, which are used to calculate the so-called traits of curd firmness over time (CFt) (Figure 1). The CFt equation provides the estimated rennet coagulation time (RCTeq), the maximum potential curd firmness after an infinite time (CFP), the curd-firming rate constant (kCF), the syneresis rate constant (kSR), the maximum curd firmness (CFmax), and the time to attain the maximum curd firmness (tmax). Despite CFt traits are not directly achievable from the Formagraph instrument, those can provide more dynamic data on the coagulation and syneresis processes and complete the information from the traditional MCP.
In order to improve the routinely measurement of MCP and CFt traits, numerous studies investigated the possibility of an indirect prediction of coagulation traits through the calibration of the near and mid-infrared spectra [12,13,14]. Another recent development of the Formagraph method is represented by the laboratory method called the 9 mL milk cheesemaking assessment (9-MilCA). Through some modifications of the original Formagraph procedure and operations that simulate the cutting, pressing, and draining of the curd, the 9-MilCA allows the calculation of the CY% and the recoveries of milk nutrients in the curd [15].
Methods and papers described above have been developed and tested on cow milk, whereas the first studies dealing with small ruminant species date back to the late 80s [16]. The aim of the present review is to describe the state of the art and possible development of researches about coagulation properties of sheep and goat milk.

Goat farming is in continuous expansion, both in developing countries and in those with a higher level of industrial production [2]. Goat milk is used in a versatile way [36]. Marketing for direct consumption as fluid milk, which is well accepted because of the low allergenicity, and dairy processing are the prevalent industrial utilizations [17].
At the present time, the scientific literature regarding coagulation traits of caprine milk is represented by 69 available documents [19]. These articles are mainly focused on the analysis of a single breed, on the association with the polymorphisms of the genetic cluster of caseins, and often with a limited number of animals.
Recent articles by Vacca et al. [37] and Stocco et al. [38] investigated coagulation properties of goat milk and the influence of milk composition, environmental, and individual effects. In those studies, the use of a common protocol allowed for a comparison of the properties of goat milk with other dairy species. The average value of RCT recorded for the goat, 13.2 min, was similar to the Mediterranean buffalo and intermediate to sheep and cattle. The mean curd firmness a30 was 36 mm, and the prolongation of the analysis up to 60 min revealed a marked syneresis starting at 45 min after rennet addition. Similarly, to sheep, the authors reported a limited number of non-coagulating samples, at 1%. The variability of the MCPs was significantly influenced by the management: 37% of the total variability was attributable to the farm effect for RCT and 69% for curd firmness a60. As regards the effect of milk nutrients, the higher the fat content, the better the coagulation properties, the higher the protein content the more delayed the RCT, and the higher the casein content the higher the curd firmness.
The modeling of CFt traits demonstrated that the high incidence of the farm effect was mainly linked to the different farming techniques, e.g., extensive vs. intensive ones [39]. Other phenotypic effects that significantly influenced coagulation traits were parity and, above all, the breed. In fact, although daily milk yield was obviously higher in specialized breeds, such as the Saanen and the Murciano–Granadina, the curd firmness was higher in native breeds, such as the Sarda goat, with a mean value of a30 at 40 mm. That last result suggested a higher dairy efficiency per liter of milk for native breeds. A statistical model used to quantify the direct effect of the breed has showed that the differences are due to the preponderant direct effect of the breed for some traits, such as for RCT, and to the indirect effect of the milk composition for others, such as for the curd firmness [37].
The use of the 9-MilCA method [15] provided novel information about the prediction of cheesemaking traits from goat milk. In general, protein recovery in the curd was higher than in other species, with an average value at 81%. The CY% showed marked differences between specialized and autochthonous breeds, with values ​​ranging from 13.6 for the Saanen and 17.8% for the Sarda, and high values of fat and protein contents in milk improved the CY% and the recovery of all milk nutrients in the curd [40,41].

The characteristics highlighted for sheep and goat milk indicate that information from other species cannot be fully applied to small ruminants. The results are suitable to support the enhancement of production potential at farms and dairy plants. Nevertheless, further studies should investigate many aspects of this topic, which are still to be clarified:

This research was funded by the Italian Ministry of University, grant FFABR 2017.

I sincerely thank the Executive Board, the Organizing and Scientific Committees of the 2018 SIPAOC Congress at Naples (Italy), all the co-authors of the cited papers, the sheep and goat breeders for giving free access to their farms, and Provincial and Regional Farmers Associations of Sardinia, Cagliari (Italy).

The author declares no conflict of interest. The funder had no role in the design of the study, in the collection, analyses, or interpretation of data, in the writing of the manuscript, or in the decision to publish the results. 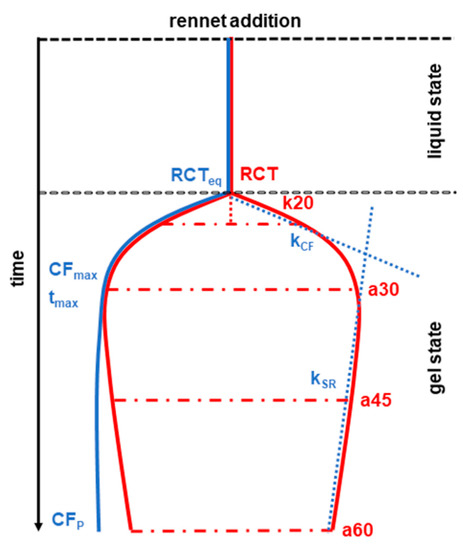 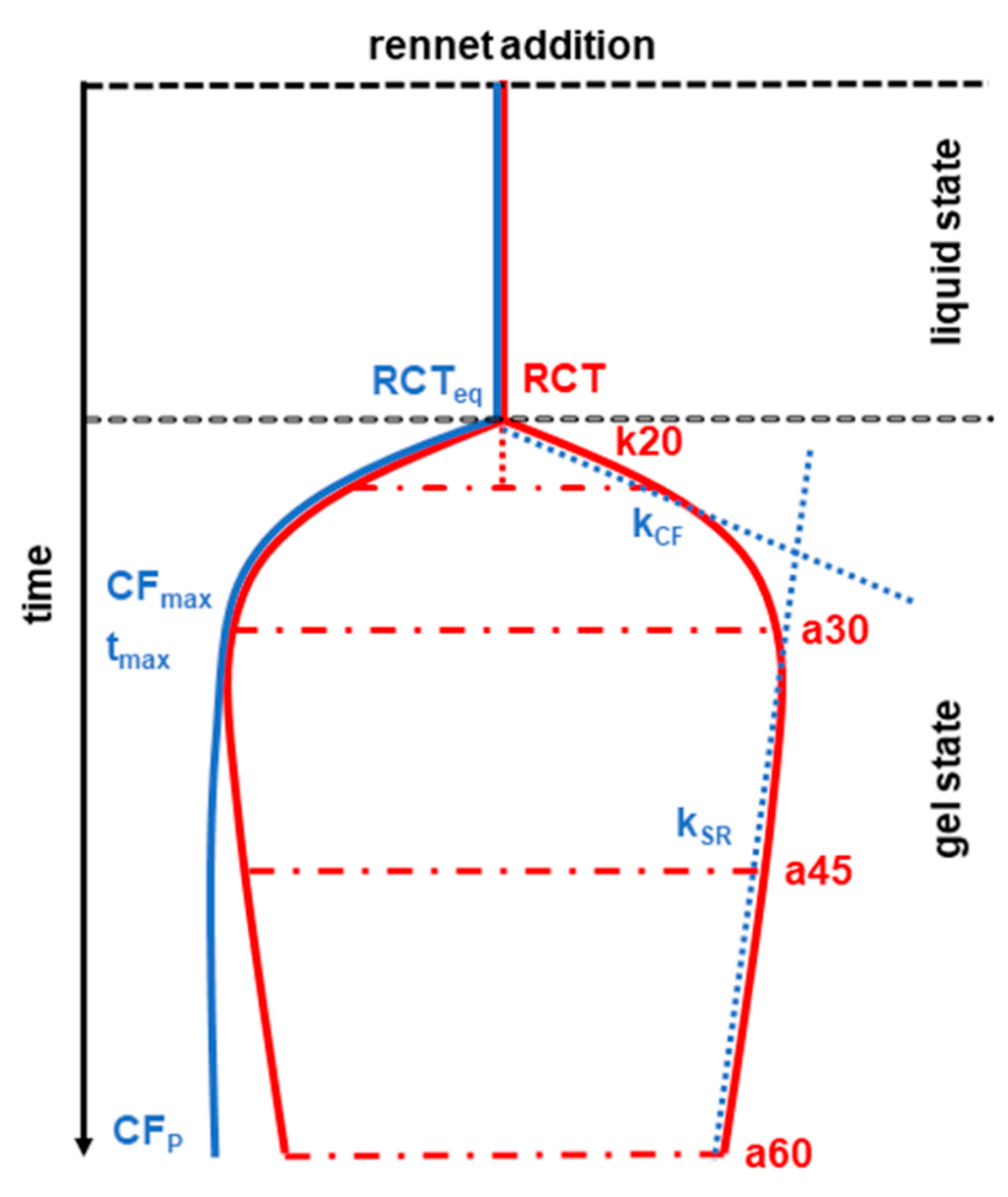