Slaughter of Pregnant Cattle in Denmark: Prevalence, Gestational Age, and Reasons
Next Article in Special Issue

Breed Group Effects on Complaints about Canine Welfare Made to the Royal Society for the Prevention of Cruelty to Animals (RSPCA) Queensland, Australia
Previous Article in Special Issue

Bovine mastitis, an inflammatory disease in the udder of dairy cows, is a common disease that causes low quantity and quality of bovine milk. Treatment and prevention of bovine mastitis still rely on antibiotics. However, concerns about excessive use of antibiotics have been raised due to the development of antibiotic-resistant bacteria. Therefore, natural products possessing protective effects in bovine udder have gained a lot of interests. Our objective was to investigate the possibility of Moringa oleifera extract (ME) in protecting bovine epithelial mammary cells. Our results demonstrated that methanol extract of Moringa oleifera leaves has beneficial effects in bovine mammary epithelial cells through its anti-inflammatory, antioxidant, and casein production properties. Data suggest that moringa extract could be a good feed supplement for protecting the udder of cows from inflammatory responses due to mastitis.

Bovine mastitis, the inflammation of mammary gland and udder tissue of dairy cattle, is a common disease that causes economic losses in dairy industries [1]. Bacterial infections are the most common cause of bovine mastitis, especially Escherichia coli. Clinical mastitis can be diagnosed through visible symptoms such as red and swollen udder or fever in dairy cattle. Serious cases of clinical mastitis can lead to cow death. Acute inflammation responses induced by Escherichia coli is usually due to the endotoxin known as lipopolysaccharide (LPS) present on the outer membrane of bacteria. LPS is recognized by toll-like receptor 4 (TLR4) which then activates a series of signaling pathways. Major pathways involved in LPS challenge include mitogen-activated protein kinase, nuclear factor kappa B (NF-κB), pro-inflammatory cytokines [e.g., tumor necrosis factor-α (TNF-α), interleukin-1β (IL-1β), and Interleukin-6 (IL-6)] and other inflammatory mediators [e.g., cyclooxygenase-2 (COX-2)] [2,3].
Nowadays, treatment and prevention of bovine mastitis are dependent on antibiotics. Unfortunately, due to abuse of antibiotics, the development of resistant pathogens has become a global concern to veterinary and public health [4]. Therefore, the development of new control and preventive strategies is needed. For instance, the utilization of natural products has gained a lot of interests. In some developing countries, farmers have difficulties in obtaining commercial drugs. They tend to treat sick farm animals with herbal remedies known as ethnoveterinary medicine [5]. In fact, ethnoveterinary research has raised in importance in Europe as people prefer organic food to pursue a healthy lifestyle [6,7]. To search for natural substances and their active ingredients to prevent bovine mastitis, many studies have been conducted and reported, including baicalein extracted from Scutellaria baicalensis and Scutellaria lateriflora [8,9], thymol isolated from thyme, oregano, and tangerine peel [10], and curcumin from turmeric [11,12].
Moringa oleifera is a tropical plant native to India. It is commonly known as a drumstick tree. It is also known as ‘Miracle Tree’ due to its high nutrient content such as proteins, minerals, and various vitamin. All parts of moringa tree, including fruits, seeds, leaves, flowers, bark, and roots have been found to possess large amounts of beneficial nutrients [13,14]. Particularly, moringa leaf is an effective source of natural antioxidants. It contains various antioxidant compounds, including phenolic acids, flavonoids, vitamin C, tannin, saponin, phytate, oxalate, alkaloid, cardenolides, and cardiac glycosides. Thus, moringa not only provides good nutrients, but also possesses various medicinal therapeutic effects, including anti-fibrotic, anti-inflammatory, anti-microbial, anti-hyperglycemic, anti-oxidant, anti-tumor, anti-cancer, and anti-clastogenic activities [15,16].
The objective of this study was to examine whether moringa leave extract might have potential preventive effects on LPS-induced inflammatory responses. Due to its anti-inflammatory potential reported in previous studies, anti-inflammatory and antioxidant effects of moringa extract (ME) were investigated in the present study using bovine mammary epithelial cells, MAC-T.

2.2. Preparation of Moringa Extract (ME)

Moringa leaf powder was purchased from Philippine Moringa & More Corporation (Rizal, Philippine). Moringa leaf powder was extracted based on a previous study [17] with minor modifications. Methanol is known to have wide solubility properties for low molecular and moderately polar substances, including antioxidant phenolic compounds [18]. Thus, methanol was chosen for extraction in this study. Moringa powder (20 g) was placed into a beaker with 200 mL of 80% (v/v) methanol. The beaker was covered with aluminum foil and stirred for 3 h at room temperature. After 3 h, the mixture was filtered with Whatman No. 1 filter paper (GE Healthcare Life Sciences, Buckinghamshire, UK). The filtered solvent was inserted into a round-bottom flask and attached to a rotary evaporator (Tokyo Rikakikai Co., Ltd., Tokyo, Japan). The solvent was evaporated under reduced pressure at 50 °C. The residue was freeze-dried and stored at -80 °C until use. Freeze-dried moringa extract (ME) was dissolved in DMSO upon usage.

The MAC-T cell line was obtained from Prof. Hong Gu Lee (Konkuk University, Seoul, Korea). MAC-T cells were cultured in high glucose DMEM containing 10% FBS, penicillin/streptomycin, 5 μg/ml insulin, and 1 μg/ml progesterone in a CO2 incubator at 37 °C. Cells were first grown to 90–100% confluency and then pre-treated with ME at concentrations of 50 and 200 μg/ml for 12 h. These ME-treated cells were then treated with LPS (1 μg/ml) for 6 or 12 h in order to investigate the anti-inflammatory effect of ME. LPS concentration was based on previous studies using bovine mammary epithelial cells [3,20].
Differentiation of MAC-T was conducted according to previous reports [21,22] with some modifications. Briefly, MAC-T cells were grown to 90% confluency in medium as described earlier. After cells were starved with serum-free DMEM for 16 h, cells were cultured in low glucose DMEM containing 5% FBS, penicillin/streptomycin, 5 μg/ml insulin, 1 μg/ml of hydrocortisone, 5 μg/ml of prolactin, and 1 μM of retinoic acid in a CO2 incubator at 37 °C. Medium was changed daily for eight days. To determine casein mRNA expression, 200 μg/ml of ME was added to cells during the last medium change. After 12 h, LPS was used for treatment for another 12 h before cells were harvested.

Cytotoxicity of ME was determined by MTT assay. MAC-T cells were seeded in a 96-well plate and treated with ME (0-400 μg/ml) for 24 h. The optical density of the 96-well plate was then measured with a UV-spectrophotometer (Biotek Instrument, USA) at 570 nm. Trypan blue exclusion assay was conducted for further confirmation. MAC-T cells were grown in 6-well plates and treated with ME (0-400 μg/ml) followed by incubation for 24 h. Cells were detached with trypsin and dyed with trypan blue. Viable cells were counted using a haemocytometer.

Intracellular ROS level was measured as described previously with some modification [19]. Briefly, cells were grown in 6-well plates until 90% confluency. Cells were treated with ME for 12 h followed by treatment with LPS for 4 h. Cells were then incubated with DCF-DA (10 μM) for 30 min and washed with PBS. The 6-well plates with cells were visualized with an Eclipse Ti2-U fluorescent microscope (Nikon Co. Ltd., Tokyo, Japan) at 200x magnification. The fluorescent area was quantified by Image J software.

3.1. Free Radical Scavenging Activities of ME

3.2. Cytotoxicity of ME in MAC-T Cells

Cytotoxicity of ME toward MAC-T cells was determined through MTT assay and trypan blue dye exclusion assay. Results showed that ME had no cytotoxic effect on MAC-T cells at concentration up to 400 μg/ml, compared with the control after 24 h of treatment (Figure 2a,b).

3.3. Anti-Inflammatory Effects of ME in MAC-T Cells

COX-2 is an enzyme associated with many inflammatory diseases. It is often used as an indicator for inflammation in in vitro studies using bovine mammary epithelial cells [3,20,24,25]. To determine the anti-inflammatory effects of ME, cells were treated with 1 μg/mL of LPS. The protein expression level of COX-2 was then examined by Western blotting. Protein expression of COX-2 was induced in cells treated with LPS. However, pre-treatment of cells with 200 μg/mL of ME significantly attenuated LPS-induced expression of COX-2 (Figure 3a).
Since NF-κB signaling is an important pathway in regulating the expression of COX-2, its activation was determined using nuclear fractionation technique [3,17]. To explore whether NF-κB pathway was modulated by ME, cells were pre-treated with ME (50 and 200 μg/mL, 12 h), followed by LPS challenge for 6 h. Similar with COX-2 expression, LPS increased translocation of NF-κB p65 subunit into the nucleus. In contrast, the nuclear translocation of NF-κB p65 subunit was decreased in cells treated with 200 μg/mL of ME (Figure 3b).
Quantitative RT-PCR was performed to determine mRNA expression levels of pro-inflammatory cytokines such as TNF-α, IL-1β, and IL-6. LPS significantly increased mRNA expression levels of these pro-inflammatory cytokines (Figure 4a–c). In Figure 4a, the mRNA expression of TNF-α significantly increased in cells treated with LPS, while pre-treatment of cells with ME decreased the expression. Likewise, ME significantly decreased LPS-induced mRNA expression of IL-1β and IL-6 (Figure 4b,c).

3.4. Antioxidant Effects of ME in MAC-T Cells

In vitro ROS scavenging activity of ME was determined using DCF-DA fluorescent dye in MAC-T cells. DCF-DA will be deacetylated to a non-fluorescent compound once diffused into the cells. However, it will later be oxidized by intracellular ROS and form a highly fluorescent compound which generates a green fluorescence. Therefore, the green area represents the production of ROS. The level of ROS was significantly increased by LPS compared with the control (Figure 5). However, cells pre-treated with ME at both 50 and 200 μg/mL showed markedly decreased ROS level in LPS-challenged cells (Figure 5). These results indicate that ME has an antioxidant effect against LPS-induced ROS production in MAC-T cells. For further confirmation, mRNA expression levels of antioxidant genes such as HO-1, NQO-1, and TXNRD1 were examined using quantitative RT-PCR. As expected, mRNA expression levels of these antioxidant genes were decreased upon LPS stimulation whereas they were significantly increased in cells pre-treated with ME (Figure 6).

3.5. Effects of ME on Casein Production in Differentiated MAC-T Cells

This paper was supported by Konkuk University in 2017. 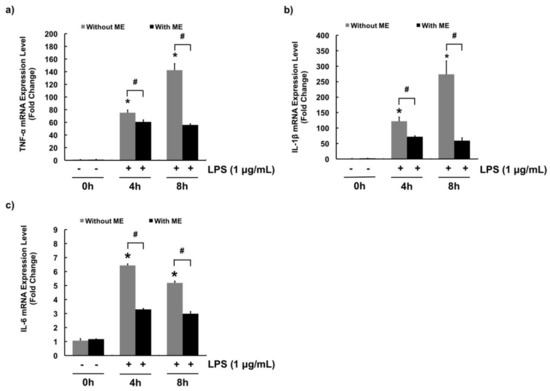 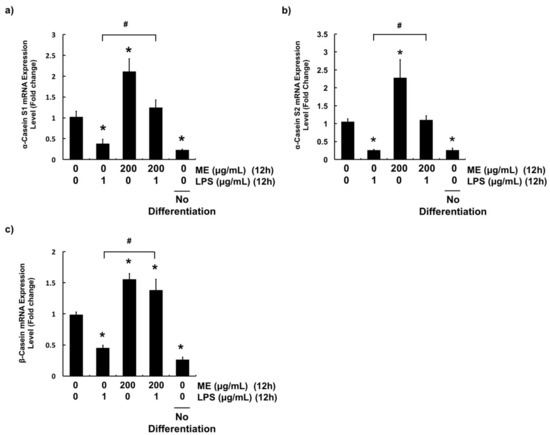 Table 1. Primers used for RT-PCR.
Table 1. Primers used for RT-PCR.
© 2019 by the authors. Licensee MDPI, Basel, Switzerland. This article is an open access article distributed under the terms and conditions of the Creative Commons Attribution (CC BY) license (http://creativecommons.org/licenses/by/4.0/).
We use cookies on our website to ensure you get the best experience. Read more about our cookies here.
Accept
We have just recently launched a new version of our website. Help us to further improve by taking part in this short 5 minute survey here. here.
Never show this again