Oxytocin is a hormone which acts as a neurotransmitter has been associated with a wide range of human social behaviours. Single nucleotide polymorphisms (SNPs) within the oxytocin receptor gene (OXTR) have been described to be involved with human-human empathy, however little is known about OXTR SNPs and human-animal empathy and spontaneous reactions towards animals. This has been investigated in the present study with 161 British students and five extensively studied OXTR SNPs. Validated, standardized measures for empathy towards animals and spontaneous reactions towards animals have been employed. Results indicate that females show higher levels of empathy and have more positive reactions towards animals than males. Furthermore, empathy towards animals was associated with the absence of the minor A allele on OXTR SNP rs2254298. These results indicate that OXTRs play a role not only for human social behaviours but also for human-animal interactions.

Sample and study design were approved by the National Health Service (NHS) research ethics committee for healthy volunteers (ACCORD) and the SRUC Research Ethics in Student Projects committee (REC code 14/HV/0005, IRAS project ID 154914). All individuals gave informed consent at the start of the study and were free to withdraw at any time.

Animal Empathy Scale (AES) was measured using the 22-item scale proposed by Paul (2000) [17]. Items were measured on a 6-point Likert scale ranging from I “completely disagree” to “fully agree.” Reversed phrased items were re-coded for the analysis and a mean scale score was computed.

Implicit associations to animals were assessed using a single category picture implicit association test (IAT), which has been adapted from the Karpinski and Steinman [50] IAT measure. The implicit association test is a timed computer-based matching task [51] using Inquisit 4 (2014), Millisecond software. Participants were presented with positive attributes as positive words (celebrating, cheerful, excellent, excitement, fabulous, friendly, glad, glee, happy, laughing, likable, loving, marvellous, pleasure, smiling, splendid, superb, paradise, triumph, wonderful), negative attributes as negative words (angry, brutal, destroy, dirty, disaster, disgusting, dislike, evil, gross, horrible, humiliate, nasty, noxious, painful, revolting, sickening, terrible, tragic, ugly, unpleasant, yucky) and animal pictures. In total 21 words for each attribute category were used along with 12 drawn images of animals (from Sparklebox.co.uk) [52] randomly presented in the middle of the computer screen, below the target categories. Animals used for the IAT included pet animals such as dog, rabbit, budgerigar; British farm animals such as cow, pig and sheep; and British wild animals such as deer and fox. Participants were instructed to use the ‘I’ and ‘E’ key on the keyboard to sort the animals into the target categories depending on the description of the task (task 1: sorting pictures of animals and positive words into the target category ‘Good or Animals’ (Figure 1A); task 2: sorting pictures of animals and negative words into the target category ‘Bad or Animals’ (Figure 1D). An IAT score was generated by the program based on the participant’s latency to respond and error rates. The program automatically records and summarises false responses (when respondents categorized the attributes (words and pictures) to the wrong target category) and too slow responses (>500 ms) [50]. The IAT score corresponds to participant’s implicit associations with the target category in this case animals [50].

Participant saliva was collected using the ‘Saliva DNA Collection, Preservation and Isolation Kit’ from Norgen Biotek (Ontario, ON, Canada) as per the manufacturer’s instructions. Participants were asked to fill a collection tube with saliva up to the 2 mL mark and the supplied preservative was then added by the researcher. Samples were agitated for 10 s to mix the saliva and preservative and then stored in a cold room (4–8 °C) until required for DNA extraction.
DNA extraction was performed by ethanol precipitation using reagents provided in the saliva DNA collection, preservation and isolation kit. Proteinase K was added to the sample and incubated at 55 °C for 10 min. Binding buffer B was then added and the mix incubated for a further 5 min at 55 °C. Isopropanol was added and the sample mixed before centrifugation. Supernatant was discarded and 70% ethanol added to the DNA pellet. Sample was left to stand on the bench top for 1 min then centrifuged. Supernatant was then again discarded and pellet rehydrated in TE buffer. Sample was incubated at 55 °C for 5 min and then stored at −20 °C until required for sequencing.

182 DNA samples were submitted for sequencing. Four samples were run in duplicate as internal controls. Sequencing of SNPs was carried out by LGC Genomics Ltd. (Middlesex, UK). One of the authors provided flanking sequencing for primer design taken from Ensembl. Every sample was sequenced for each of the 5 SNPs. Where a read could not be obtained the SNP was called as 0, otherwise SNPs were called as per regular annotation. 68.7% of samples tests (125/182) returned a result for all 5 SNPs and 1.65% (3/182) of samples tested failed to return a result for any SNP. Further analysis was only performed on SNPs from those individuals for whom an IAT score and an AES score could be calculated (n = 161). The summary table (Table 1) below outlines the success rate for each individual SNP used in the analysis.

Data were analysed using IBM SPSS Statistics V22.0. To assess the reliability of each scale Cronbach’s alpha was computed which represents a measure of the internal consistency of items forming a scale. The empathy measure and IAT measures were analysed using general linear models (GLMs) fitting SNPs rs2268491, rs13316193, rs4686302, rs2254298, rs53576 by presence or absence of the minor allele, gender and working in an animal care profession as fixed effects. Residual plots were examined to confirm normality assumptions for both models were satisfied. The value for statistical significance was set to α = 0.05.

The present study investigated the effect of allelic variation at 5 SNP loci on the OXTR (rs2268491, rs13316193, rs4686302, rs2254298, rs53576) which had previously been shown to associate with human-human empathy and other pro-social traits [28,29,30,31]. The present study investigated if OXTR SNPs also associate with empathy to and implicit associations with animals. The animal empathy scale (AES; [17]) we applied showed good internal reliability; Cronbach’s alpha = 0.849 exceeding reported reliabilities of 0.71 [54] and 0.78 [17]. Results of the present study found that females had higher levels of empathy towards animals than male participants a finding previously reported in other work [17,55]. Furthermore, pet ownership and working in an animal care profession were significantly associated with higher levels of empathy towards animals. These results confirm previous results investigating farmers’ [18] veterinarians’ [20] empathy towards animals and their ability to recognize pain in cattle. The scores for the AES also showed a significant association with one of the genotyped SNPs (rs2254298). Homozygous G individuals reported higher levels of empathy towards animals than minor A allele carriers. However as in this sample there were only 2 homozygous A individuals, due to the fact that the present sample comes from a European population where the A allele is quite uncommon (http://grch37.ensembl.org), it is impossible to say if this effect was diluted in heterozygous individuals compared to AA homozygotes. Furthermore, OXTR rs2254298 has also been shown to be involved in emotional empathy in schizophrenic and healthy individuals [35]. In order to also investigate implicit associations of animals the present study employed an implicit association task (IAT) to evaluate the effects in dependence of allelic variation. Results show that participants’ (male and female combined) associations with animals were slightly positive indicating positive implicit associations with animals. Furthermore, female participants showed higher IAT scores again indicating that women are more affective and empathetic towards animals [5,17]. The results of the GLM did indicate associations between the predictor variables care profession, rs53576 and the IAT score. Interestingly, results of the present study did not show a great variation in IAT scores, with participants’ implicit associations of animals being assessed as only slightly positive. Further research could investigate a broader sample including non-pet owners and people with differing degrees of attachment or liking of animals and or attachment to pets to account for a greater variation in both implicit measures and explicit measures.

The study for the first time supports a role for the oxytocin receptor in enabling animal directed empathy in humans. It suggests when taken in the context of the wider literature that the oxytocin receptor may provide a common biological substrate for both human-human and human-animal empathy. The present study using explicit measures of empathy has also confirmed previous work showing that females express higher levels of empathy to animals. In addition, we have shown that other characteristics (working in animal care) are associated with higher human-animal empathy. We also applied for the first time a test of implicit associations to animals and found that whilst the participants in general had neutral associations, again females had more positive associations with animals.

The research was funded by BBSRC Strategic funding to The Roslin Institute, and from the Scottish Government’s Rural and Environment Science and Analytical Services Division (RESAS).

We would like to acknowledge the staff and students at the SRUCs Barony, Oatridge and Elmwood campuses and in particular Karen Martyniuk, Andy Leonard and Ann Wood their support and help in this study. We would also like to acknowledge Helen Brown (Roslin Institute) and Juan David Arbelaez Velez (IRRI) for their statistical advice. 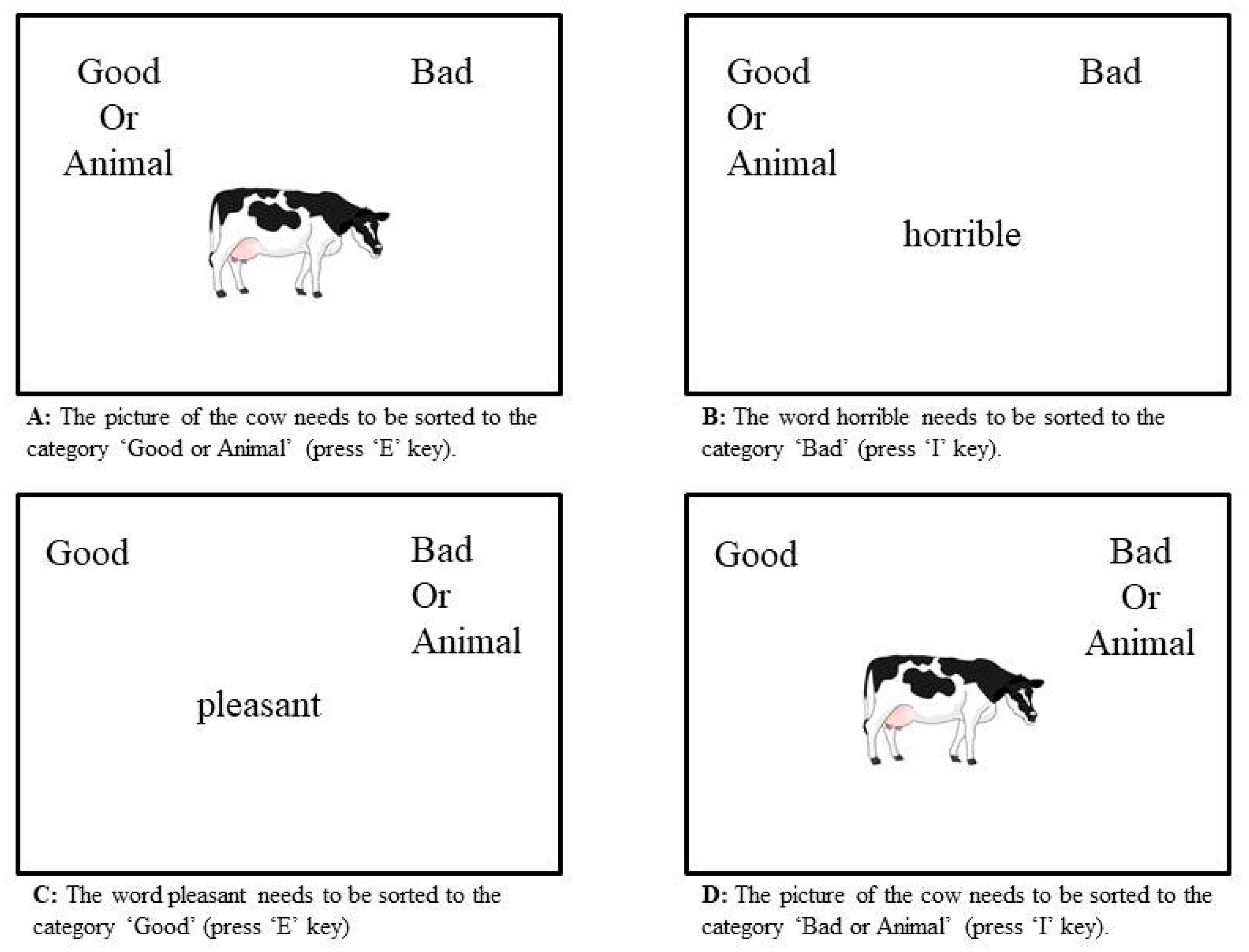