“Pets Negotiable”: How Do the Perspectives of Landlords and Property Managers Compare with Those of Younger Tenants with Dogs?

Historically, older cats and dogs have been particularly at-risk for euthanasia in animal shelters due to their lower perceived appeal for adoption. This study found that the condition at intake had the greatest impact on the outcomes of older cats and dogs. Additionally, the application of specialized veterinary care, such as orthopedic surgery or chronic disease maintenance, is discussed as factors that inform higher rates of live outcomes for these senior companion animals. These findings demonstrate that if shelters integrate practices that address the specific needs of ageing companion animals, the live outcomes for this population can increase.

With advances in veterinary medicine that can increase the lifespan of cats and dogs and the effectiveness of spay/neuter programs in reducing the juvenile population of pets, animal shelters are experiencing an increasing population of older companion animals in their care. The purpose of this study was to assess the factors that inform the outcomes of these older cats and dogs. The sample consisted of 124 cats and 122 dogs that were over the age of 84 months (seven years) who were taken into a shelter over a one-year period. To assess the impact of condition at intake on the outcome for the senior animals, a multinomial logistic regression was performed. These findings indicate that preventative programming that can address the reasons these older animals are surrendered, as well as advancements in specialized medical or behavioral programs for ageing companion animals, may support an increase in live outcomes for older cats and dogs in shelters. Further study is needed to evaluate how the quality of life of older animals is impacted by remaining in the care of shelters rather than being euthanized.
Keywords: companion animals; cat; dog; shelter; outcomes; euthanasia; geriatric; length of stay companion animals; cat; dog; shelter; outcomes; euthanasia; geriatric; length of stay

There is a growing body of evidence documenting the positive impacts of pet-keeping in communities. Particularly, the literature has demonstrated that efforts directed toward increasing pet-keeping through the adoptions of companion animals in shelters and rescues can result in improvements in public health [1,2,3,4]. These positive impacts on human health include increases in physical activity and cardiovascular health, use of social capital, maintenance of positive attachment relationships, and socioemotional health [5,6,7,8,9,10]. Despite the positive role that companion animals play in communities, there continue to be incidences in which families surrender their pets to animal shelters. The American Humane Association calculates that animal shelters across the United States take in an estimated 5–8 million cats and dogs every year [11]. The most commonly cited reasons for surrender include: aggressive behavior of the animal, housing-related issues, and caretaker’s personal issues [12]. This indicates that there continue to be limitations in the animal welfare safety net for some cats and dogs.
As spay/neuter of companion animals has become more widely practiced in the United States (U.S.), the population of companion animals in shelters has become less populated with juveniles and more populated with older cats and dogs [13,14,15]. Studies show there has been an increased incidence of surrender due to high medical costs [16]. Other studies have identified that animal illness and old age are the primary risk factors for being euthanized at the time of surrender [17]. Additional studies indicate that the chance of a dog or cat getting adopted significantly decrease with age of the animal due to high kennel competition against animals that have more “desirable” traits [18,19,20,21]. Furthermore, older animals are also more likely to be returned following adoption [22]. The result of these factors is that older cats and dogs are amongst those with the greatest risk for euthanasia in a shelter [23,24]. If lifesaving of sheltered companion animals is to continue to be optimized, then shelters should consider advancing their practices to support an ageing population.
Despite the evidence that age impacts the current outcomes for older cats and dogs in shelters, the literature has yet to document the influence of other factors in addition to age that can impact the outcomes of this population. This study evaluated the influence of a variety of factors on the outcomes of “senior” cats and dogs at the private, non-profit animal rescue, Austin Pets Alive! (APA), in Austin, Texas. Beyond age, this study also looked at other considerations for shelter decision-making, including breed, size, condition on intake, treatment plan, and reason for surrender. Understanding these variables and the relationship that they have to length of stay and live outcomes can support animal shelters in critically evaluating their policies and programs for older cats and dogs.

A series of descriptive statistics were used to assess the sample of cats and dogs. A multinomial logistic regression was performed to determine the impact of the reason for surrender, condition at intake, and the treatment plan on the senior animals’ outcomes. A 95% confidence interval was used for all statistical analyses, with any result of a p value greater than or equal to 0.05 considered statistically significant.

The sample of companion animals included in the study encompassed 124 cats and 122 dogs who were over the age of 84 months (7 years) and transferred from AAC to APA due to medical or behavior concerns. Most of the cats and dogs in the sample (55.5% and 55.8%, respectively) were 9 years or older (Table 1). A majority of the cats (81%) and dogs (55%) came to AAC as stray or abandoned (Table 2). Thirteen (10%) of the cats and 27 (22%) of the dogs were surrendered by their caretaker due to the animal’s medical concerns. Following the evaluation by AAC staff to verify the condition of the animals, 11 (9%) of the dogs and 22 (17%) of the cats were transferred from AAC due to behavior concerns, while 105 dogs (86%) and 101 cats (81%) were transferred due to medical needs. Six dogs (5%) and one cat (1%) were transferred on urgent medical status. A majority (72%) of the dogs weighed under 59 pounds (Table 3). A variety of breeds of both cats and dogs were present in the sample (Table 4). Beyond the factors included for analysis in the study (reason for surrender, condition at intake, treatment plan), it is notable that 35 of the dogs included in the study were heartworm positive, and three of the dogs had a bite case history. Within the sample of cats, five cats were ringworm positive, 14 cats were FIV positive, five cats were FeLV positive, and two cats were both FIV and FeLV positive. Five of the cats and nine of the dogs in the sample had been previously adopted from APA.

By determining the gaps in shelters’ programs for older cats and dogs, shelter management can address the factors that have driven this population to be one of the most at-risk for euthanasia. Furthermore, this research highlights the importance of preventative outreach, specialized medical and behavior programs, and a strong foster care system that are equipped to address the needs of older animals in their homes and in a shelter.

This study was conducted through a full-time research assistant position that is funded by Maddie’s Fund. The cost for publication were sponsored by Maddie’s Fund®, Michelson Found Animals, and the Humane Society of the United States.

The authors declare no conflict of interest. The funding sponsors had no role in the design of the study; in the collection, analyses, or interpretation of data; in the writing of the manuscript; and in the decision to publish the results. 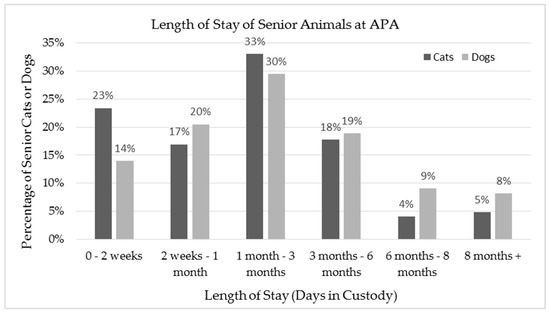 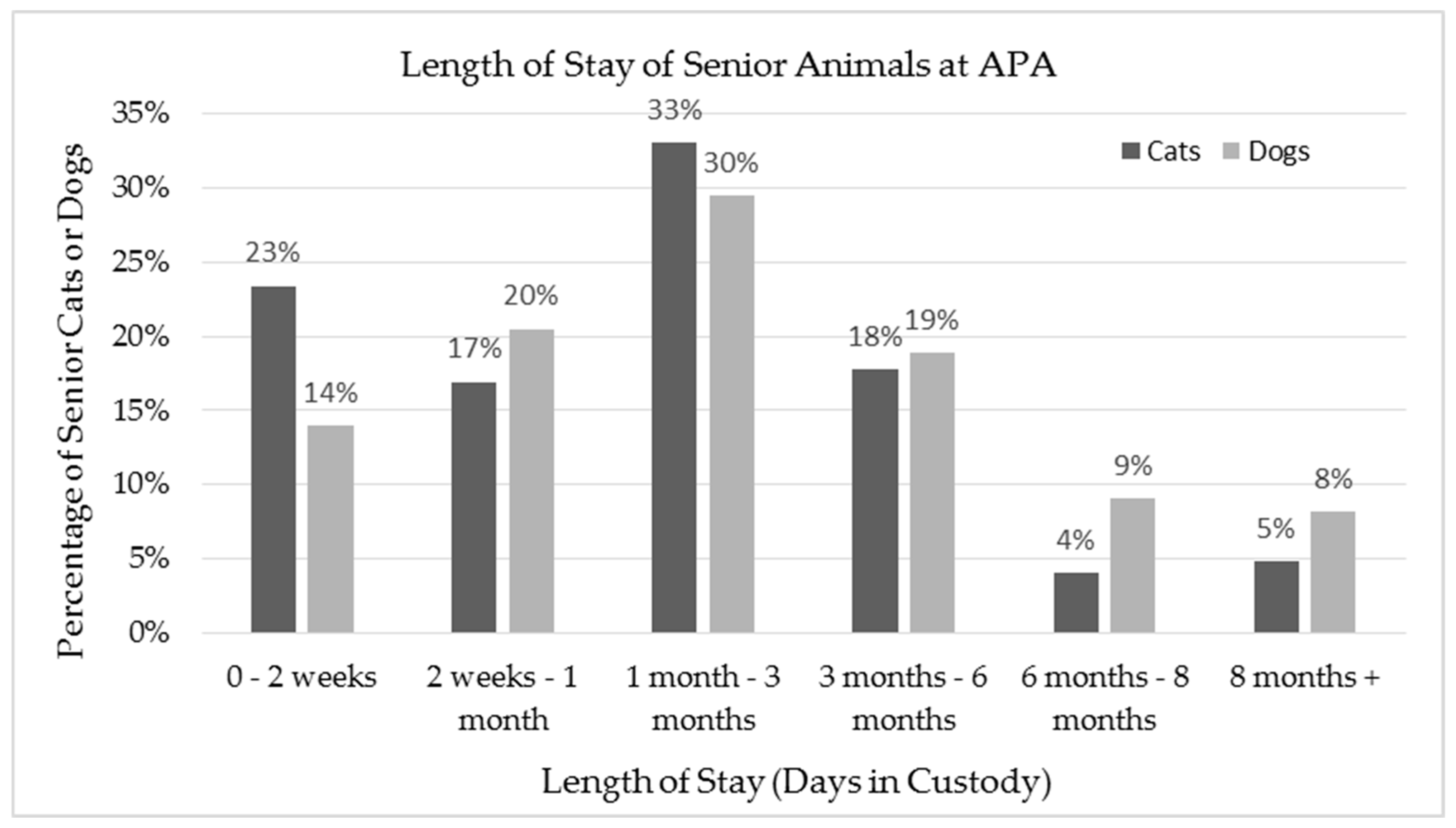 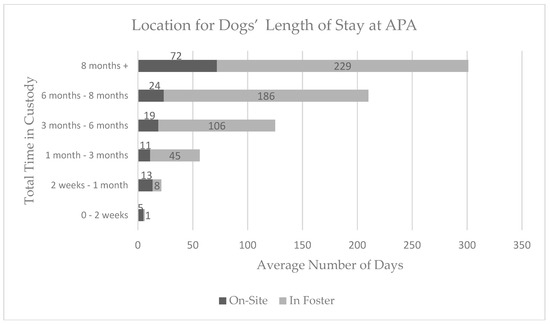 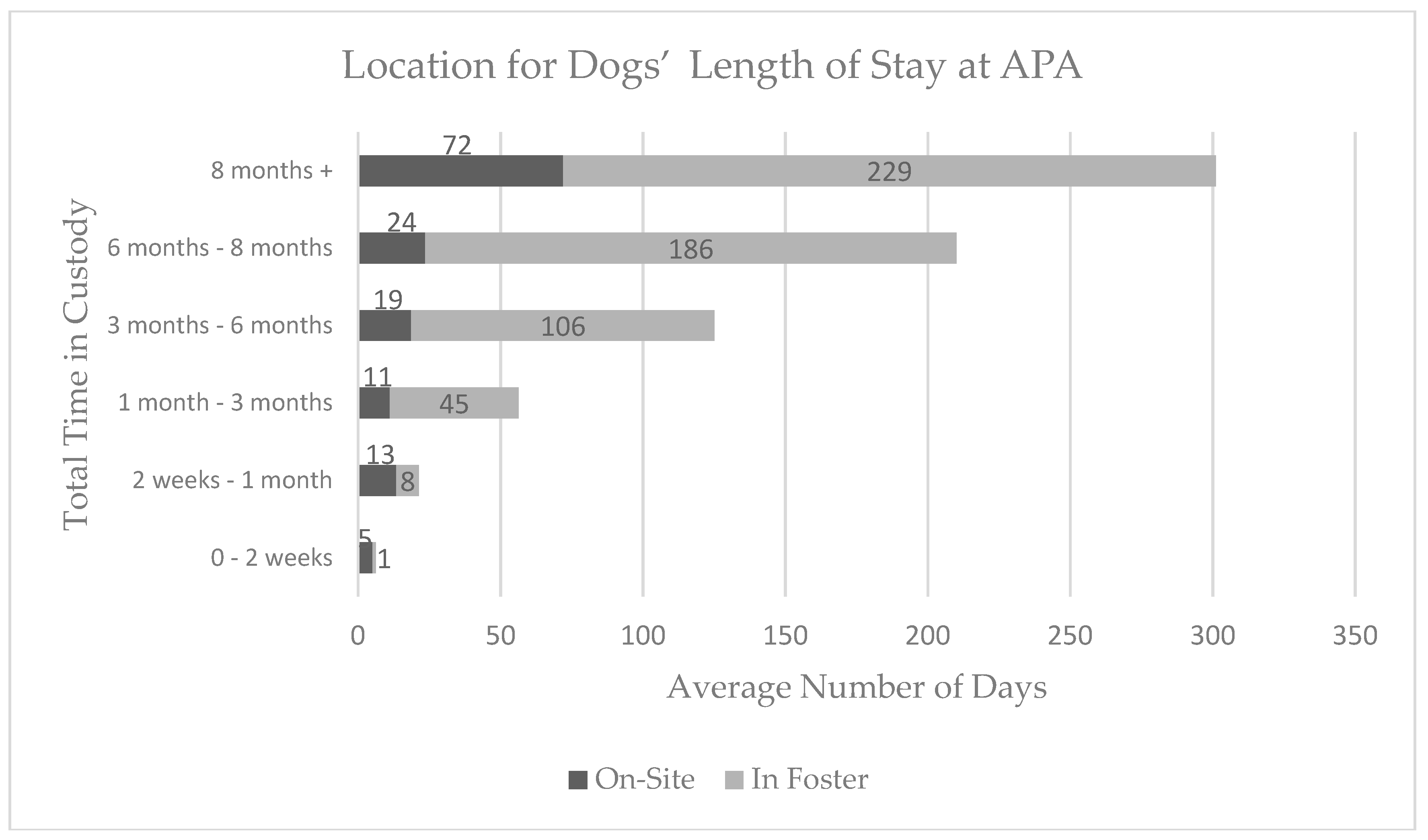