Global Positioning System (GPS)-based virtual fences offer the potential to improve the management of grazing animals. Prototype collar devices utilising patented virtual fencing algorithms were placed on six Angus heifers in a 6.15 hectare paddock. After a “no fence” period, sequential, shifting virtual fences restricted the animals to 40%, 60%, and 80% of the paddock area widthways and 50% lengthways across 22 days. Audio cues signaled the virtual boundary, and were paired with electrical stimuli if the animals continued forward into the boundary. Within approximately 48 h, the cattle learned the 40% fence and were henceforth restricted to the subsequent inclusion zones a minimum of 96.70% (±standard error 0.01%) of the time. Over time, the animals increasingly stayed within the inclusion zones using audio cues alone, and on average, approached the new fence within 4.25 h. The animals were thus attentive to the audio cue, not the fence location. The time spent standing and lying and the number of steps were similar between inclusion zones (all p ≥ 0.42). More lying bouts occurred at the 80% and lengthways inclusion zones relative to “no fence” (p = 0.04). Further research should test different cattle groups in variable paddock settings and measure physiological welfare responses to the virtual fencing stimuli. View Full-Text
Keywords: GPS; technology; welfare; associative learning; activity; behavioural patterns GPS; technology; welfare; associative learning; activity; behavioural patterns
►▼ Show Figures 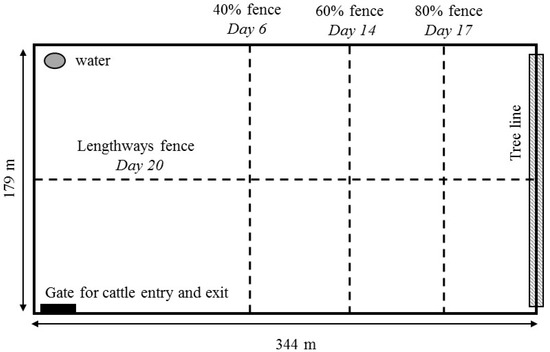