Equine Welfare during Exercise: An Evaluation of Breathing, Breathlessness and Bridles
Previous Article in Journal

Behavioural Profiles of Brown and Sloth Bears in Captivity

In this paper, the Humane Society of the United States (HSUS) farm animal protection work over the preceding decade is described from the perspective of the organization. Prior to 2002, there were few legal protections for animals on the farm, and in 2005, a new campaign at the HSUS began to advance state ballot initiatives throughout the country, with a decisive advancement in California (Proposition 2) that paved the way for further progress. Combining legislative work with undercover farm and slaughterhouse investigations, litigation and corporate engagement, the HSUS and fellow animal protection organizations have made substantial progress in transitioning the veal, pork and egg industries away from intensive confinement systems that keep the animals in cages and crates. Investigations have become an important tool for demonstrating widespread inhumane practices, building public support and convincing the retail sector to publish meaningful animal welfare policies. While federal legislation protecting animals on the farm stalled, there has been steady state-by-state progress, and this is complemented by major brands such as McDonald’s and Walmart pledging to purchase only from suppliers using cage-free and crate-free animal housing systems. The evolution of societal expectations regarding animals has helped propel the recent wave of progress and may also be driven, in part, by the work of animal protection organizations. View Full-Text
Keywords: ballot initiatives; animal welfare; gestation crate; battery cage; veal ballot initiatives; animal welfare; gestation crate; battery cage; veal
►▼ Show Figures 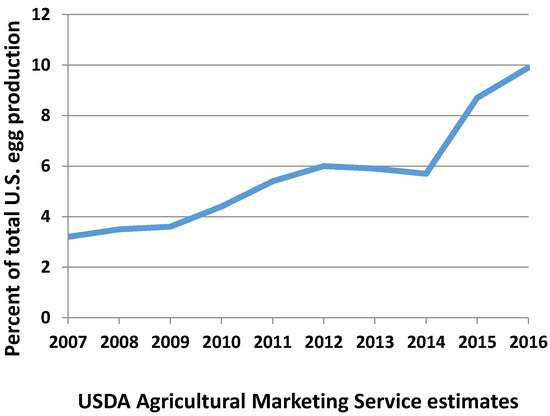 Shields, S.; Shapiro, P.; Rowan, A. A Decade of Progress toward Ending the Intensive Confinement of Farm Animals in the United States. Animals 2017, 7, 40.


Shields S, Shapiro P, Rowan A. A Decade of Progress toward Ending the Intensive Confinement of Farm Animals in the United States. Animals. 2017; 7(5):40.


Shields, Sara; Shapiro, Paul; Rowan, Andrew. 2017. "A Decade of Progress toward Ending the Intensive Confinement of Farm Animals in the United States." Animals 7, no. 5: 40.