Methionine (Met) requirement studies with homozygous (Na/Na) and heterozygous (Na/na) naked neck meat type chicken utilized 144 birds of average weight (50% each genotype and sex) within two N balance experiments involving both the starter (d10–20) and grower period (d25–35). The birds were randomly allotted to five experimental diets with graded protein supply and Met as the limiting amino acid. The proportion of native feed protein sources (soy protein concentrate, maize, wheat, fishmeal and wheat gluten) was kept constant to ensure a uniform protein quality in all diets. The Met requirement depending on genotype, sex, age period and growth performance (protein deposition) was estimated using a non-linear modeling procedure of N utilization in monogastric animals. On average, 0.47% (Na/Na) and 0.45% (Na/na) dietary Met was established as adequate in the starter diet, as well as 0.37% (Na/Na) and 0.36% (Na/na) Met in the grower diet for both of the sexes. In conclusion, the Met requirement of the naked neck chicken is not significantly different from its normally-feathered counterparts. In addition, the low feather production was not reflected by reduced requirement for Met in naked neck birds. However, these conclusions are valid only at the given Met:Cys ratio (1:1) in the experimental diets. View Full-Text
Keywords: naked neck meat type chicken; N balance studies; amino acid efficiency; methionine requirement naked neck meat type chicken; N balance studies; amino acid efficiency; methionine requirement
►▼ Show Figures 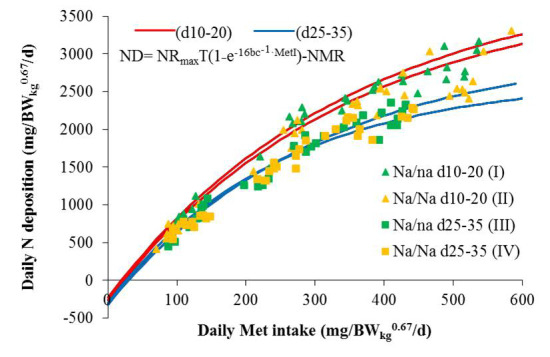