The Effect of Steps to Promote Higher Levels of Farm Animal Welfare across the EU. Societal versus Animal Scientists’ Perceptions of Animal Welfare
Previous Article in Journal

Swooping in the Suburbs; Parental Defence of an Abundant Aggressive Urban Bird against Humans
Previous Article in Special Issue

The ability of supply chains to deliver high(er) levels and standards of animal welfare is subject to two critical conditions: (a) the innovative and adaptive capacity of actors in the chain to respond to society’s demands; (b) consumers actually buying animal-friendly products. Unless citizens are willing to support suppliers who comply with high(er) standards, their votes for better animal welfare risk exporting poor animal welfare to other countries with less rigorous standards. The logic of market failure in the case of animal welfare points to the superiority of consumer subsidies over producer subsidies to deliver improved animal welfare. 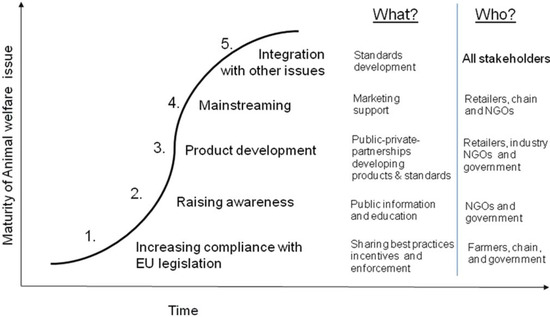