Greater metabolic needs in high-producing beef cattle might lead to mineral and vitamin deficiency. Previous studies have shown the benefits of B-vitamin and trace mineral supplementation in animal performance of ruminants; however, little is known about the effects of supplementing finishing beef cattle with rumen-protected forms on the liver metabolism. Therefore, the aim of the present study was to determinate the impact of rumen-protected B-vitamin blend and hydroxy trace mineral supplementation on the hepatic proteome of finishing steers. This study reports the first evidence indicating that the supplementation of these micronutrients induces protein changes concerning oxidative metabolism and responses to oxidative stress in the liver tissue.

Vitamin B and trace minerals are crucial molecular signals involved in many biological pathways; however, their bioavailability is compromised in high-producing ruminant animals. So far, studies have mainly focused on the effects of these micronutrients on animal performance, but their use in a rumen-protected form and their impact on liver metabolism in finishing beef cattle is poorly known. We used a shotgun proteomic approach combined with biological network analyses to assess the effects of a rumen-protected B-vitamin blend, as well as those of hydroxy trace minerals, on the hepatic proteome. A total of 20 non-castrated Nellore males with 353 ± 43 kg of initial body weight were randomly assigned to one of the following treatments: CTRL—inorganic trace minerals without supplementation of a protected vitamin B blend, or SUP—supplementation of hydroxy trace minerals and a protected vitamin B blend. All animals were fed the same amount of the experimental diet for 106 days, and liver biopsies were performed at the end of the experimental period. Supplemented animals showed 37 up-regulated proteins (p < 0.10), and the enrichment analysis revealed that these proteins were involved in protein folding (p = 0.04), mitochondrial respiratory chain complex I (p = 0.01) and IV (p = 0.01), chaperonin-containing T-complex 2 (p = 0.01), glutathione metabolism (p < 0.01), and other aspects linked to oxidative-stress responses. These results indicate that rumen-protected vitamin B and hydroxy trace mineral supplementation during the finishing phase alters the abundance of proteins associated with the electron transport chain and other oxidation–reduction pathways, boosting the production of reactive oxygen species, which appear to modulate proteins linked to oxidative-damage responses to maintain cellular homeostasis. View Full-Text
Keywords: beef cattle; proteomics; vitamin B; hydroxyl trace minerals; liver metabolism beef cattle; proteomics; vitamin B; hydroxyl trace minerals; liver metabolism
►▼ Show Figures 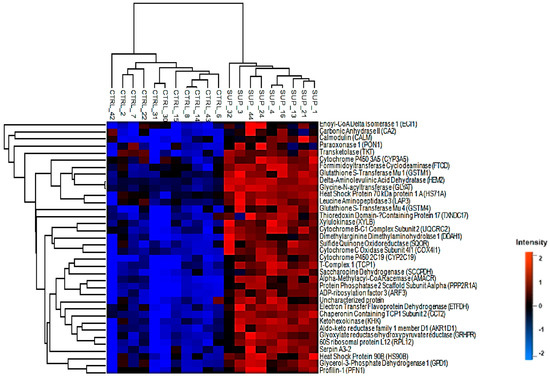