In modern dairy farms, the optimum age for first calving is 23 to 25 months, to achieve this goal heifers having to conceive at 15 months of age using fixed-time artificial insemination. Despite the difference of follicular dynamics between heifers and cows, the dairy cow based synchronization protocols need to be modified for dairy heifers. We investigated the effect of one-day delaying administration of intravaginal progesterone device (CIDR) at the beginning of 5-day Cosynch protocol. Pregnancy per AI (P/AI) was significantly declined in CIDR-4 (4-day CIDR application instead of 5 days) group as heifers’ age proceeded. We have shown that there was no benefit of one-day delay of CIDR administration in 5-day Cosynch protocol on P/AI. However, higher P/AI in 5-day CIDR synchronization in aged heifers could reveal the necessity of longer progesterone administration in Cosynch protocol for better fertility.

Effect of one-day delaying progesterone administration at the beginning of 5-day Cosynch protocol was investigated in Holstein heifers for the first artificial insemination (AI). Heifers received a synchronized ovulation and timed AI (TAI) with CIDR inserted on day (d) 0 (CIDR-5; n = 206) or d 1 (CIDR-4; n = 192). In both group, GnRH was administered on d 0 followed by a single PGF2α injection and CIDR removal five days later from GnRH. On d 8, TAI and GnRH administration were concurrently conducted. Heifers detected in estrus up to 24 h prior to TAI were inseminated without GnRH administration. Rates of ovulation, accessory CL formation and new dominant follicle development following initial GnRH injection did not differ between groups. P/AI did not differ between CIDR-4 (44.3%, [85/192]) and CIDR-5 (51.9%, [107/206]) groups, respectively. Pregnancy per AI (P/AI) was significantly (p < 0.01) declined as heifers’ age (12–13, 14, 15, 16 and17–21 months) proceeded in CIDR-4 group (55.6%, 52.1%, 37.9%, 35.7%, 32.4%) compared to those in CIDR-5 group (60.0%, 50.0%, 53.9%, 51.5%, 46.2%) respectively. In conclusion, there is no benefit for delaying CIDR administration in 5-day Cosynch protocol in dairy heifers. However, higher P/AI in CIDR-5 group in older heifers can be considered for reproductive management. View Full-Text
Keywords: pregnancy; TAI; Cosynch; progesterone; follicle development; dairy heifer pregnancy; TAI; Cosynch; progesterone; follicle development; dairy heifer
►▼ Show Figures 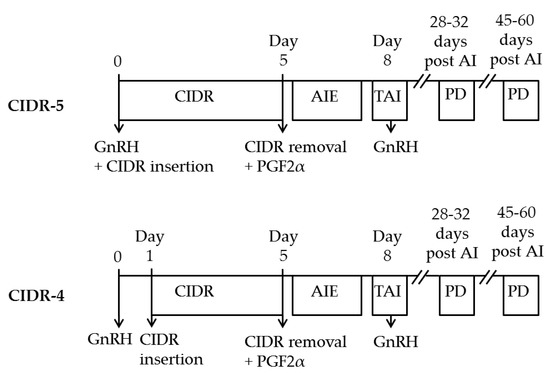