Lactococcus garvieae is an emerging pathogen that causes lactococcosis, which is a septicemia disease that, as per reports, primarily affects rainbow trout and tilapia in various parts of the world. In rainbow trout, the clinical disease is very similar to other diseases caused by Gram-positive bacteria, including weissellosis, which has been previously reported in trout in Mexico. Following septicemia outbreaks that tested negative for weissellosis, a study was conducted to determine the etiology. This study confirms, for the first time, the presence of L. garvieae in processes of a septicemia disease affecting five rainbow trout farms in Mexico. Fourteen isolates were obtained from different geographical regions, but presented homogenous biochemical and protein profiles, as well as weak genetic heterogeneity. This study evidences the wide distribution and incidence of lactococcosis cases at rainbow trout farms in Mexico, demonstrating the need to develop vaccination programs against this disease.

Lactococcosis is a hyperacute hemorrhagic septicemia disease caused by Lactococcus garvieae, which is an emerging pathogen in global fish farming. Between 2016 and 2018, rainbow trout (Oncorhynchus mykiss) from five farms that presented outbreaks were sampled as part of a Mexican surveillance program for the detection of fish diseases. Fourteen L. garvieae isolates were recovered from sampled fish, as confirmed by biochemical tests, 16S rRNA gene sequencing, and clinical and histological insights. The biochemical and protein profiles of the isolates obtained were homogeneous. Repetitive extragenic palindromic—(REP)—and enterobacterial repetitive intergenic consensus sequence PCR (ERIC-PCR) analyses established weak genetic heterogeneity. Rainbow trout challenged with two of the isolates used at different bacterial concentrations (10−2 and 10−4 CFU/mL) showed melanosis, and hemorrhages were observed in the fins, liver, kidney, and spleen. Isolates were obtained from all of the organs sampled, including from surviving fish, as either pure or mixed cultures. The present study is the first to confirm the presence of L. garvieae as the agent of severe lactococcosis outbreaks in the two primary Mexican states for trout farming. View Full-Text
Keywords: Lactococcus garvieae; rainbow trout; emerging disease; hemorrhagic septicemia lactococcosis; challenge assay Lactococcus garvieae; rainbow trout; emerging disease; hemorrhagic septicemia lactococcosis; challenge assay
►▼ Show Figures 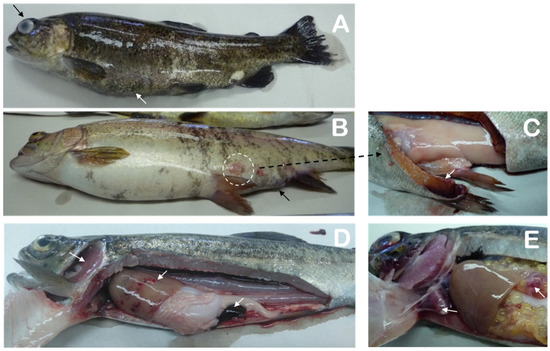