“None of Them Could Say They Ever Had Seen Them, but Only Had It from Others”: Encounters with Animals in Eighteenth-Century Natural Histories of Greenland

Soiling of Pig Pens: A Review of Eliminative Behaviour

The soiling of pig pens has important negative consequences in terms of animal welfare, health, workload, and environmental emissions of pig farming. The aim of this review is to present the state-of-the-art regarding pigs’ normal eliminatory behaviour (i.e., defaecation and urination) and pen soiling, aimed here at solving pen-soiling problems in existing systems, and in a following publication aimed at the design of a more sustainable pig-farming system. To this end, we summarize a large body of literature on pen soiling and pigs’ eliminative behaviour in different farming systems. We propose a “disease framework” interpretation of pen soiling, to help identify its causes, underlying mechanisms, and solutions.

This is a comprehensive review on the pigs’ normal eliminatory behaviour (i.e., defaecation and urination) and pen soiling. This review is aimed primarily at solving issues with pen soiling in current systems, and ultimately at the future design of a well-functioning pig toilet, which we intend to elaborate on in a subsequent publication. In this paper, first, normal elimination is described in relation to what is known about its phylogeny, ontogeny, causation, and function, i.e., according to Tinbergen’s four why questions concerning animal behaviour. Then, pen soiling is described as if it were a medical disorder, highlighting its importance, aetiology, symptoms, diagnosis, pathogenesis, treatment, and prevention. Due to its negative consequences in terms of animal welfare, health, workload, and environmental emissions, possible methods to address pen soiling in current systems are described. Probably, pigs do not choose a specific place to eliminate but rather choose the most comfortable place for resting, and avoid eliminating there. We identified four main strategies to reduce pen soiling: (1) reducing the suitability of the designated elimination area to be used for other functions, especially resting or thermoregulation; (2) improving the suitability of other functional areas in the pen to be used for their specific function, such as resting and activity; (3) reducing the suitability of other functional areas to be used for elimination; and (4) improving the suitability of the elimination area for elimination. These prevention strategies and the encompassing disease framework provide a structured approach to deal with pen soiling in existing systems and to support the future design, development, and implementation of a well-functioning pig toilet that can help to achieve some of the main goals of modern pig production, namely reducing environmental emissions as well as substantially improving pig welfare. View Full-Text
Keywords: animal welfare; pigs; eliminative behaviour; defecation; pen soiling; hygiene animal welfare; pigs; eliminative behaviour; defecation; pen soiling; hygiene
►▼ Show Figures 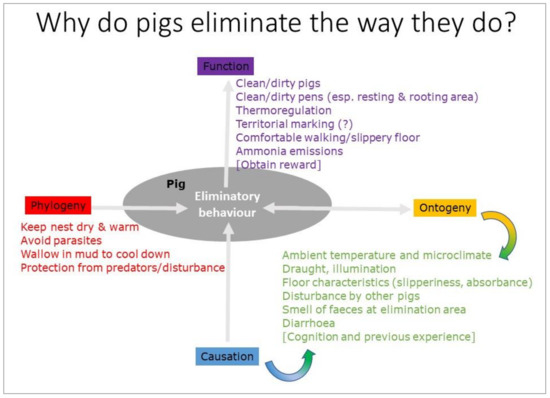