Analyses of Virulence Genes of Clavibacter michiganensis subsp. michiganensis Strains Reveal Heterogeneity and Deletions That Correlate with Pathogenicity
Next Article in Special Issue

Changes in the Rumen Bacteriome Structure and Enzymatic Activities of Goats in Response to Dietary Supplementation with Schizochytrium spp.
Previous Article in Special Issue

An estimated 265,000 Shiga toxin-producing Escherichia coli (STEC) infections occur in the United States annually, ranging in severity from mild diarrhea to ischemic colitis and hemolytic uremic syndrome (HUS). Infection can be fatal [1]. STEC are found in the intestinal tract of healthy ruminants (e.g., cattle, goats) and can be transmitted to humans through contaminated food or water, contact with an infected animal or their environment, or directly between persons [2].
More than 100 STEC serogroups are associated with human illness; serogroup O157 is the most identified cause of STEC infection in the United States. In 2009, CDC recommended that stool specimens submitted to clinical laboratories from all patients with acute community-acquired diarrhea be tested for Shiga toxin or its genes and simultaneously cultured for E. coli O157 [3]. Clinical laboratories have increasingly adopted culture-independent tests to detect Shiga toxin genes, resulting in increased detection of non-O157 STEC [4,5,6,7,8]. In 2010, the incidence of sporadic (not associated with an outbreak) non-O157 STEC infections detected through active sentinel surveillance surpassed STEC O157 infections and has remained higher [6,9].
Most STEC infections are not associated with known outbreaks, but data obtained through outbreak investigations provide important information for understanding modes of transmission and sources. Previous reports have described transmission modes and exposures for O157 and non-O157 STEC outbreaks separately, during different time frames [10,11]. We describe the epidemiology of both O157 and non-O157 STEC outbreaks during 2010–2017 and compare their features. From 2010–2017, STEC O157 outbreaks were reported approximately twice as often as non-O157 STEC outbreaks; however, the distribution of O157 and non-O157 outbreaks varied by age, sex, and severity whereas transmission mode exhibited little variation.

We defined an outbreak as ≥2 persons with a laboratory-confirmed STEC infection associated with a common exposure and no other pathogen reported. Laboratory-confirmed cases, as well as epidemiologically linked, clinically compatible cases without laboratory confirmation, were included in case counts. Outbreaks with a serogroup reported were assumed to be culture-confirmed for that serogroup. A serogroup was considered a cause of an outbreak when isolated from ≥2 persons or when isolated from a person and an implicated food or animal. Outbreaks with multiple serogroups were included and categorized as O157, non-O157, or both. Food exposures were categorized according to the Interagency Food Safety Analytics Collaboration (IFSAC) food categorization scheme [13]. Settings were classified as home; childcare; camp; school (includes colleges and universities); other institutions (e.g., hospital, nursing home, shelter, prison/jail); restaurant; farm/dairy; festival/fair; petting zoo; recreational area (e.g., beach, park); and other (e.g., grocery store). States within the contiguous United States were categorized as “north” if north of the 37th parallel and south if below; states with substantial segments crossing this latitude (California and Nevada) were assessed by county; counties with substantial segments crossing the 37th parallel were excluded from geographic analyses.

The data presented in this study are available on request from the corresponding author. Due to PII and propriety information, a complete NORS dataset is not publicly available. A subset of key variables from the NORS database is publicly available at https://wwwn.cdc.gov/norsdashboard/ and the full dataset can be requested through [email protected].

We would like to thank the state, local, and territorial public health officials for submitting outbreak reports to CDC through the National Outbreak Reporting System (NORS).

The findings and conclusions are those of the authors and do not necessarily represent the views of the Centers for Disease Control and Prevention. 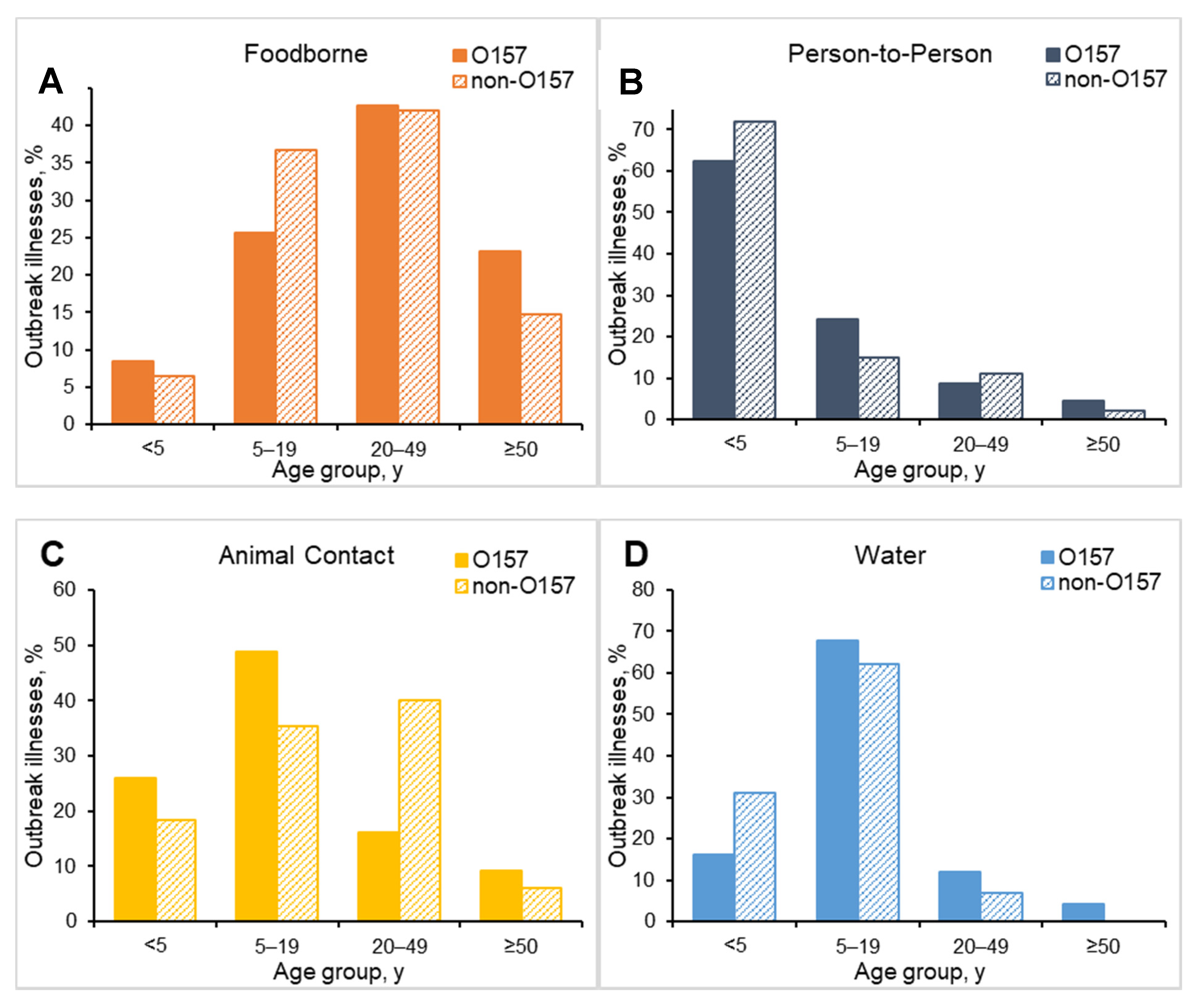 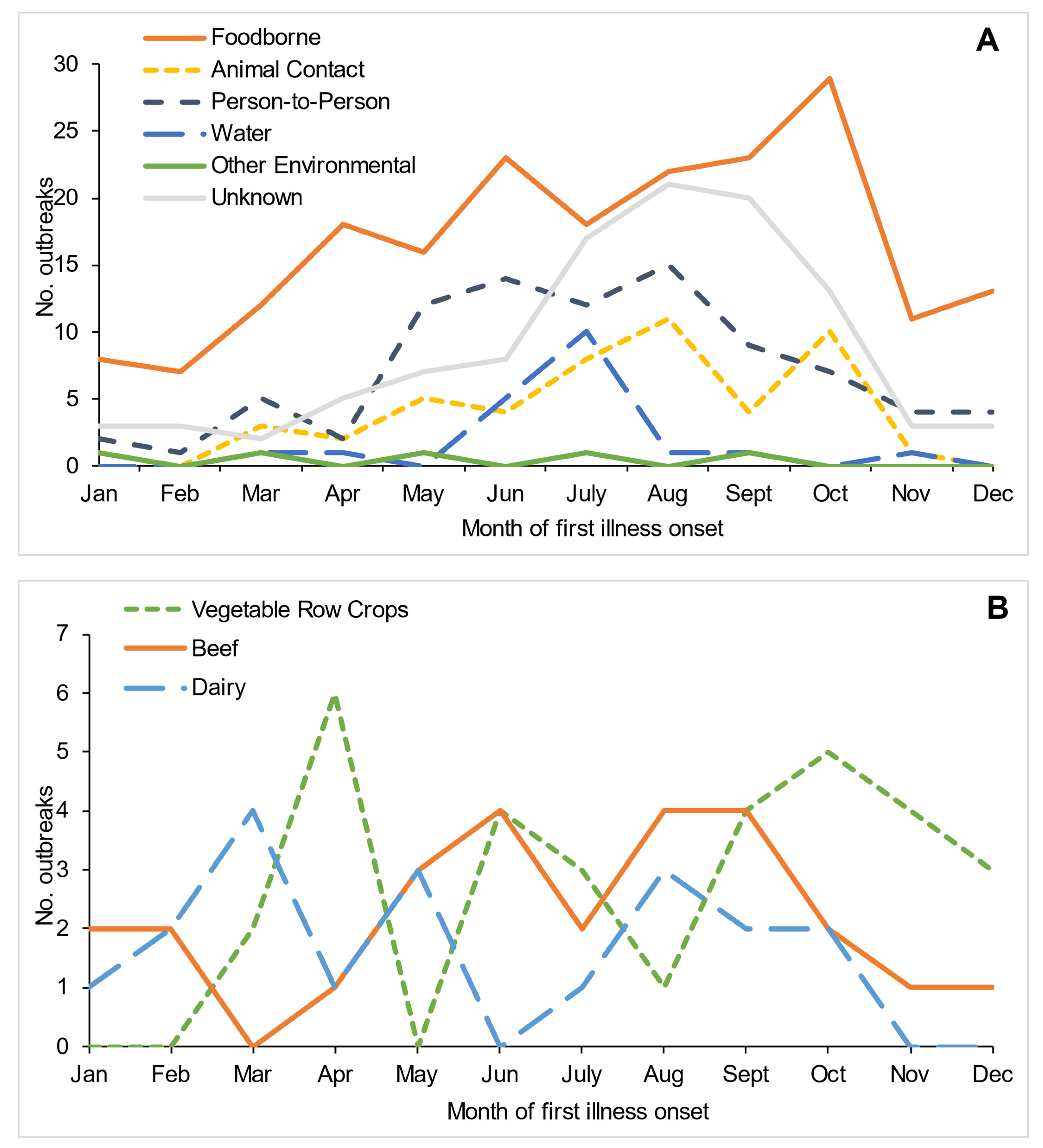 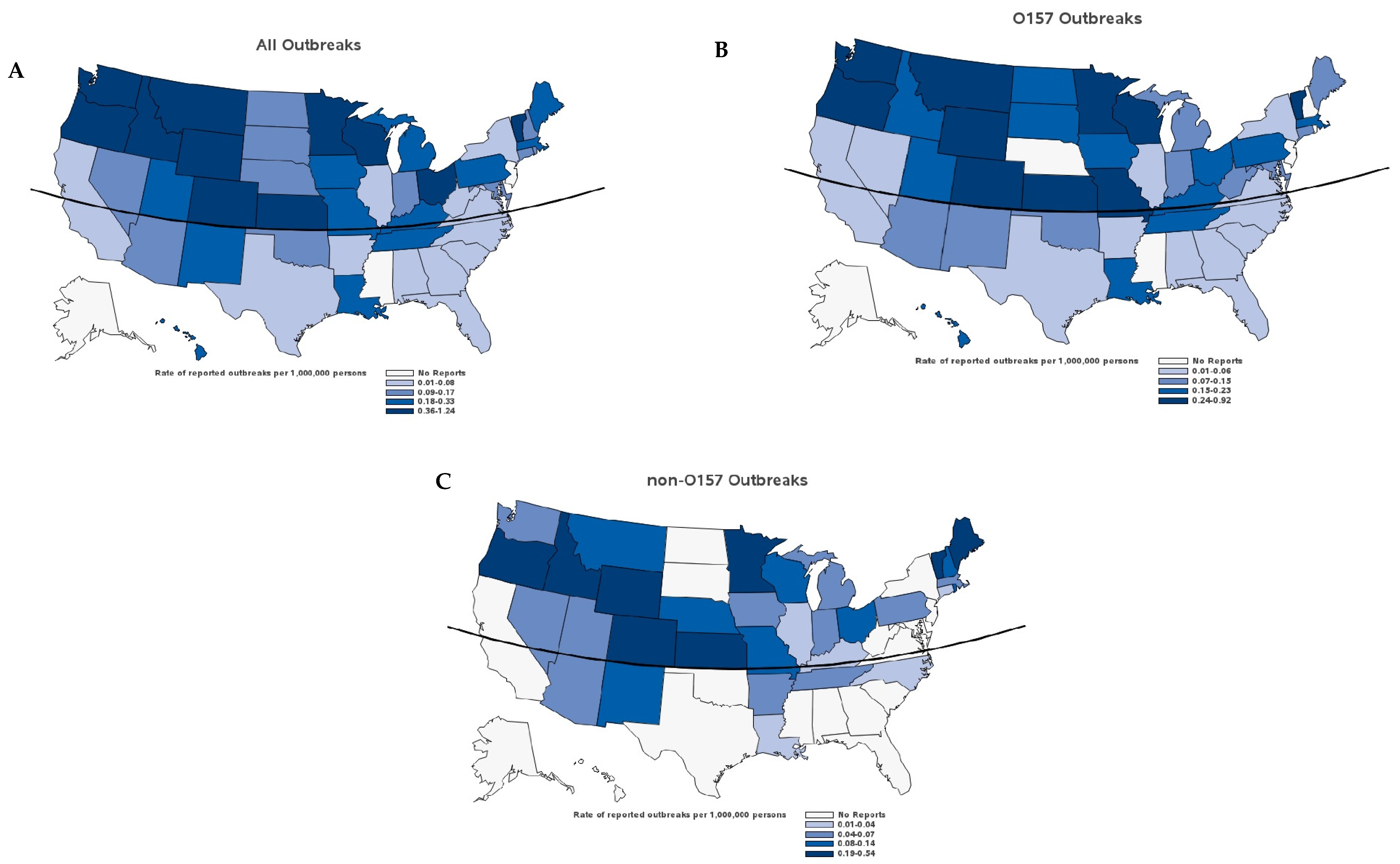