Antibiotic resistance genes (ARGs) including those from the blaCTX-M family and mcr-1 that encode resistance to extended spectrum β–lactams and colistin, respectively, have been linked with IncHI2 plasmids isolated from swine production facilities globally but not in IncHI2 plasmids from Australia. Here we describe the first complete sequence of a multiple drug resistance Australian IncHI2-ST4 plasmid, pTZ41_1P, from a commensal E. coli from a healthy piglet. pTZ41_1P carries genes conferring resistance to heavy-metals (copper, silver, tellurium and arsenic), β-lactams, aminoglycosides and sulphonamides. The ARGs reside within a complex resistance locus (CRL) that shows considerable sequence identity to a CRL in pSDE_SvHI2, an IncHI2:ST3 plasmid from an enterotoxigenic E. coli with serotype O157:H19 of porcine origin that caused substantial losses to swine production operations in Australia in 2007. pTZ41_1P is closely related to IncHI2 plasmids found in E. coli and Salmonella enterica from porcine, avian and human sources in Europe and China but it does not carry genes encoding resistance to clinically-important antibiotics. We identified regions of IncHI2 plasmids that contribute to the genetic plasticity of this group of plasmids and highlight how they may readily acquire new resistance gene cargo. Genomic surveillance should be improved to monitor IncHI2 plasmids. View Full-Text
Keywords: IncHI2; plasmid; porcine; mefB; complex resistance locus; multiple drug resistance IncHI2; plasmid; porcine; mefB; complex resistance locus; multiple drug resistance
►▼ Show Figures 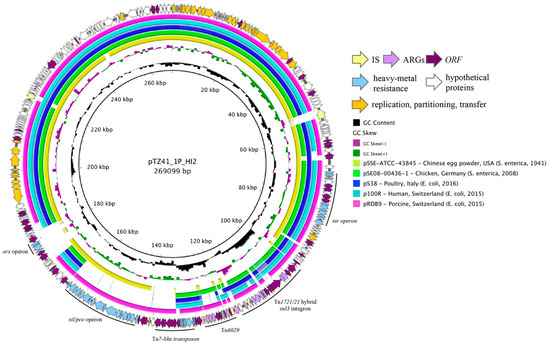