Background: Phylogroup B2 Escherichia coli have been associated with ulcerative colitis (UC). In this study, we aimed to compare colonization with the UC-associated E. coli p19A in different mice strains, to investigate the role of alpha hemolysin in a UC mouse model. Methods: In this study, Sigirr −/− and C57BL/6 mice were chosen, and UC was induced by adding dextran sulfate sodium (DSS) to the drinking water. The mice were pre-treated with ciprofloxacin. p19A expressing luminescence and GFP, alpha-hemolysin knock out p19A-ΔhlyI II, and non-pathogenic lab E. coli DH10B were cultured in LB broth, and orally gavaged into the mice. Colonization with p19A WT was visualized using an in vivo imaging system. Results: p19A WT colonized the colon, ileum, Peyer’s patches, liver, and spleen of infected C57BL/6 and Sigirr −/− mice. A total of 99% of the p19A WT infected C57BL/6 mice and 29% of the p19A WT infected Sigirr −/− mice survived to the 4th post infection day. Conclusion: UC-associated E. coli p19A WT colonized the intestines of DSS-treated mice and caused extra-intestinal infection. Hemolysin is an important factor in this pathogenesis, since isogenic hemolysin mutants did not cause the same inflammation. View Full-Text
Keywords: inflammatory-bowel-disease; Sigirr −/− mice; C57BL/6-mice; Escherichia coli; alpha hemolysin inflammatory-bowel-disease; Sigirr −/− mice; C57BL/6-mice; Escherichia coli; alpha hemolysin
►▼ Show Figures 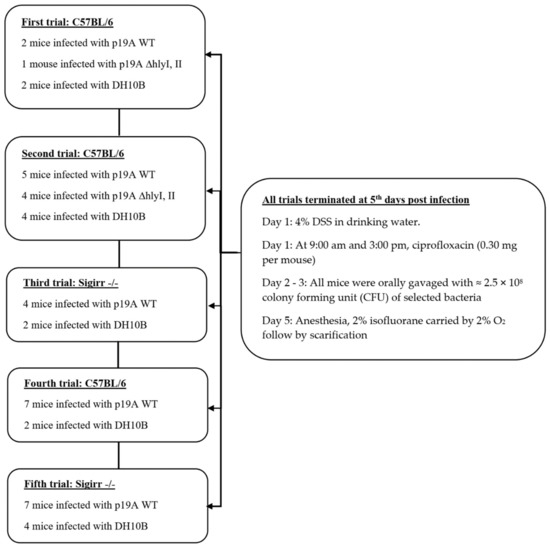