Using mRNA transcript levels for key functional enzymes as proxies for the organohalide respiration (OHR) rate, is a promising approach for monitoring bioremediation populations in situ at chlorinated solvent-contaminated field sites. However, to date, no correlations have been empirically derived for chlorinated solvent respiring, Dehalococcoides mccartyi (DMC) containing, bioaugmentation cultures. In the current study, genome-wide transcriptome and proteome data were first used to confirm the most highly expressed OHR-related enzymes in the bioaugmentation culture, KB-1TM, including several reductive dehalogenases (RDases) and a Ni-Fe hydrogenase, Hup. Different KB-1™ DMC strains could be resolved at the RNA and protein level through differences in the sequence of a common RDase (DET1545-like homologs) and differences in expression of their vinyl chloride-respiring RDases. The dominant strain expresses VcrA, whereas the minor strain utilizes BvcA. We then used quantitative reverse-transcriptase PCR (qRT-PCR) as a targeted approach for quantifying transcript copies in the KB-1TM consortium operated under a range of TCE respiration rates in continuously-fed, pseudo-steady-state reactors. These candidate biomarkers from KB-1TM demonstrated a variety of trends in terms of transcript abundance as a function of respiration rate over the range: 7.7 × 10−12 to 5.9 × 10−10 microelectron equivalents per cell per hour (μeeq/cell∙h). Power law trends were observed between the respiration rate and transcript abundance for the main DMC RDase (VcrA) and the hydrogenase HupL (R2 = 0.83 and 0.88, respectively), but not transcripts for 16S rRNA or three other RDases examined: TceA, BvcA or the RDase DET1545 homologs in KB1TM. Overall, HupL transcripts appear to be the most robust activity biomarker across multiple DMC strains and in mixed communities including DMC co-cultures such as KB1TM. The addition of oxygen induced cell stress that caused respiration rates to decline immediately (>95% decline within one hour). Although transcript levels did decline, they did so more slowly than the respiration rate observed (transcript decay rates between 0.02 and 0.03 per hour). Data from strain-specific probes on the pangenome array strains suggest that a minor DMC strain in KB-1™ that harbors a bvcA homolog preferentially recovered following oxygen stress relative to the dominant, vcrA-containing strain. View Full-Text
Keywords: organohalide respiration; Dehalococcoides; trichloroethene; biomarkers; Geobacter; proteomics organohalide respiration; Dehalococcoides; trichloroethene; biomarkers; Geobacter; proteomics
►▼ Show Figures 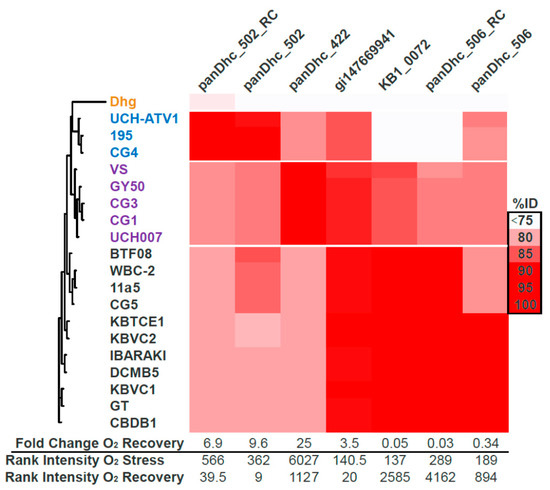