Despite the commercial rise of probiotics containing Bacillaceae spp., it remains important to assess the safety of each strain before clinical testing. Herein, we performed preclinical analyses to address the safety of Bacillus subtilis BS50. Using in silico analyses, we screened the 4.15 Mbp BS50 genome for genes encoding known Bacillus toxins, secondary metabolites, virulence factors, and antibiotic resistance. We also assessed the effects of BS50 lysates on the viability and permeability of cultured human intestinal epithelial cells (Caco-2). We found that the BS50 genome does not encode any known Bacillus toxins. The BS50 genome contains several gene clusters involved in the biosynthesis of secondary metabolites, but many of these antimicrobial metabolites (e.g., fengycin) are common to Bacillus spp. and may even confer health benefits related to gut microbiota health. BS50 was susceptible to seven of eight commonly prescribed antibiotics, and no antibiotic resistance genes were flanked by the complete mobile genetic elements that could enable a horizontal transfer. In cell culture, BS50 cell lysates did not diminish either Caco-2 viability or monolayer permeability. Altogether, BS50 exhibits a robust preclinical safety profile commensurate with commercial probiotic strains and likely poses no significant health risk to humans. View Full-Text
Keywords: Bacillus subtilis BS50; probiotics; safety Bacillus subtilis BS50; probiotics; safety
►▼ Show Figures 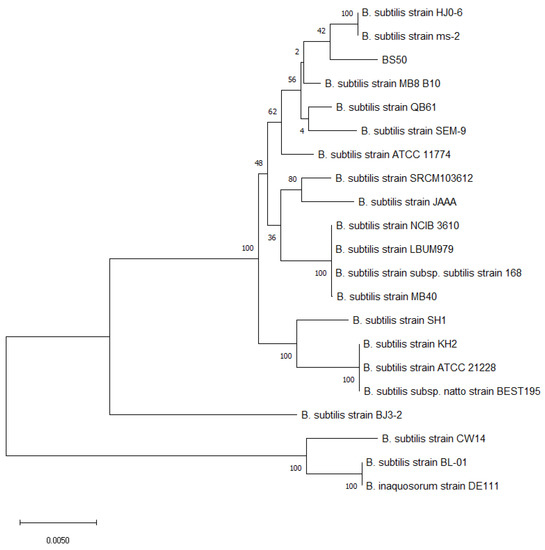