:
Nowadays, the development or improvement of soft actuation mechanisms is a crucial topic for the achievement of dexterous manipulation using. Then, a primary target of research is the design of actuation and driving devices. Consequently, in this paper, we introduce a soft driving epicyclical mechanism that mimics human muscle behavior and fulfills motion requirements to achieve grasping gestures using a robotic finger. The prototype is experimentally assessed, and results show that our approach has enough performance for the implementation in grasping tasks. Furthermore, we introduce the basis for a new soft epicyclical mechanism merger with shape memory alloys to allow active stiffness control of the mechanism.
Keywords:
actuation and driving mechanism; soft driving epicyclical mechanism; shape memory alloy

The task of designing or improving a robotic hand (to replicate the grasping capabilities and the kinematic functionality of the human hand) involves the consideration of high-complexity sensory and motor functions. The literature (e.g., [1]) shows that some robotic hands designed for research purposes have provided solutions for the domain of prosthesis. However, the actual state of the art shows that the requirements of dexterous manipulation—regarding mechanisms, actuation, and kinematic properties—have not been fulfilled [2]. One important consideration for developing actuation mechanisms concerns the actuation level, robotic hands present in the current state of the art could be classified mainly into three categories (see Table 1):
Type of actuation is based on the number of actuators used to drive a joint. For instance, a robot having three rotational joints, each one provided with one degree of freedom, could be driven by three actuators (one per joint)—in that case, the robot is fully-actuated. When the number of actuators is bigger than the number of joints, the robot is over-actuated. Finally, when the number of actuators is lower than the number of joints, two or more joints must be driven by only one actuator, that case is the under-actuated scenario.
Regarding functional requirements, Ramirez Arias [22] proposes a study of three critical aspects of the human hand: The kinematics, the functionality, and the dynamics. Concluding that for the development of a prosthetic hand, each finger must achieve the following:
Concerning the definition of criteria to qualify the muscle’s behavior, Hill’s mechanical equivalent models are more suitable due to the use of equivalences between biological and mechanical elements. Classical Hill’s model was established by Hill [23], and consists of an arrangement of elastic elements that are used as descriptors of the muscle’s elastic behavior. Figure 2 shows the Equivalent model, based on the description given by Hill [24].
Over the years, several variations of the Hill model have been proposed, adding mechanical elements and considerations to qualify the muscle’s behavior. In this paper, we choose the model proposed by Ramirez Arias [22], which mainly considers two significant variations with respect to classical models: The pennation angle , which influences the kinematics and the force during movements; and a parallel damper-spring element, representing the tendon to describe the muscle behavior accurately. The complete model, presented in Figure 3, is composed by:
A classic actuation system and a drive mechanism can easily fulfill motion, force, and frequency requirements. However, a rigid device is not able to mimic the required viscoelastic behavior. Consequently, the first constraint for developing an appropriate mechanism is the inclusion of soft materials in the machinery design [25], merging the usage novel fabrication technologies as 3D printing [26,27], which can also lead to the development of soft robots.
Therefore, in this paper, we introduce the design of a biomimetic driving mechanism, aiming to reproduce the viscoelastic behavior of the human muscle, meanwhile satisfying kinematic, dynamic, and static requirements. The device considers the operating principle of the epicyclical mechanism merged with elastic elements.

Considering that the finger prototypes are designed to perform flexion and extension in two dimensions, the kinematic is measured using a camera (Canon EOS 600D) pointing at a single-finger platform, shown in Figure 12, to track circular markers placed in finger joints and fingertip. The camera is positioned at 1 m from the finger prototype, and is adjusted to assure a pixel size of mm. The position accuracy (measured comparing several static images with a known value of length) is mm.
Images coming from the camera are processed to automatically recognize circular markers. The image analysis follows these five main steps (see Supplementary Materials):
The image analysis delivers the position vectors of the joints, i.e., the vectors for the MCP joint of the finger, j, for the PIP joint, and for the DIP joint. Likewise, the vectors correspond to the fingertip positions. Considering that the movement is performed in the -plane, is always zero. The angles are measured, as shown in Figure 14, following the DHKK parameterization. DHKK parameters are defined to parameterize direct and inverse kinematics of robots composed of kinematic chains. The parameters can be described as follows [28]:
Formulation of direct kinematic is carried out merging DKKK parameters in the homogeneous matrix described in Equation (1), which formulates transformations between i-th and -th joints. Moreover, the kinematic of a robot composed of n joints is as presented in Equation (2). As a result, the matrix is a composition of the orientation of the end effector , and the position vector , as shown in Equation (3).
Thereafter, the following three vectors linking joints are defined:
These vectors are used to calculate rotation angles as
The first angle is calculated with respect to a reference positive vertical unitary vector —Figure 15 shows the vectors , the joints and fingertip position, and the location of .
The proposed dynamic model uses the principle of virtual displacements and virtual work [29]. The equivalent dynamic model of the finger is shown in Figure 16, where , , and are, respectively, the weights of the proximal, medial, and distal phalanges, and are placed at the coordinates of the centers of mass , , and . is the applied force, which is equivalent to the reaction force, and is the input torque.
The virtual work is calculated for (1) the external forces (i.e., weight, applied force, and input torque) , where is the transposed external force vector and is the virtual displacement vector of the center of masses; and (2) the external forces contact point and the inertial forces (e.g., centrifugal forces) , where is the diagonal mass matrix composed of the masses and inertias , is the second derivative with respect to time of the coordinates vector representing the acceleration vector, and is the virtual displacement vector of the inertial frameworks.
The dynamic equilibrium is given by Equation (5), but, as in our model, the rigid bodies have movement restrictions and the displacements in the points where forces are applied aren’t independent—so, to solve the equilibrium equation it is necessary to separate the coordinates into dependent and independent coordinates.
In order to solve the equilibrium equation, considering the movement restrictions, it is necessary to separate dependent and independent coordinates. The separation is performed using the transformation proposed as where is the Jacobian of dependent coordinates, is the Jacobian of independent coordinates, is the virtual displacement vector of the independent coordinates, and is the identity matrix. The equilibrium is thus written as follows:
Solving Equation (7), we obtain the input torque as a function of the force and the kinematic variables . The resulting expression is: where

Following the human grasping requirements, a new actuation system—so-called the soft epicyclical tendon-based mechanism—is developed to add a soft behavior to the robotic finger joints. The mechanism actuates the robotic finger prosthesis ProMain-I, which is under-actuated. The driving mechanism is able to accurately fix the joint-angles relations during free movement.
The designed ProMain-I finger is also assessed experimentally, with the aim of validating its performance in terms of displacement and force. The PIP and DIP joint angles show an under-damped behavior for the PIP and the DIP joints when the finger gets in contact with the platform where the force sensor is placed. We compare the angle value obtained from the kinematic measure with the calculated angle value issued from fixed transmission relation of the soft epicyclical mechanism. As a result, we find that the mean absolute error of the angle is , and the standard deviations is . With respect to the angle of the DIP joint, the mean absolute error is and the standard deviations is .
Finally, we introduce the design of a new version of the soft epicyclical mechanism using an SMA wire in parallel to the flexible tendon for the ProMain-I robotic finger. This actuation system allows controlling the stiffness of the actuated joints handling the damping effect, evidenced during the experiments performed with the ProMain-I finger.

Chaîne articulée comprenant un unique actionneur et ensemble de chaînes articulées associées, patent number FR1656914 [31]: The invention relates to an articulated chain (1), forming, in particular, all or part of a finger, or an arm, or a leg, or a manipulator of said articulated chain (1), comprising a first member (10), a second member (20), and a flexible seam (30)—the first member (10) and the second member (20) being each attached to the flexible seam (30), which is made of a material having a Shore A hardness of between 0 and 50. 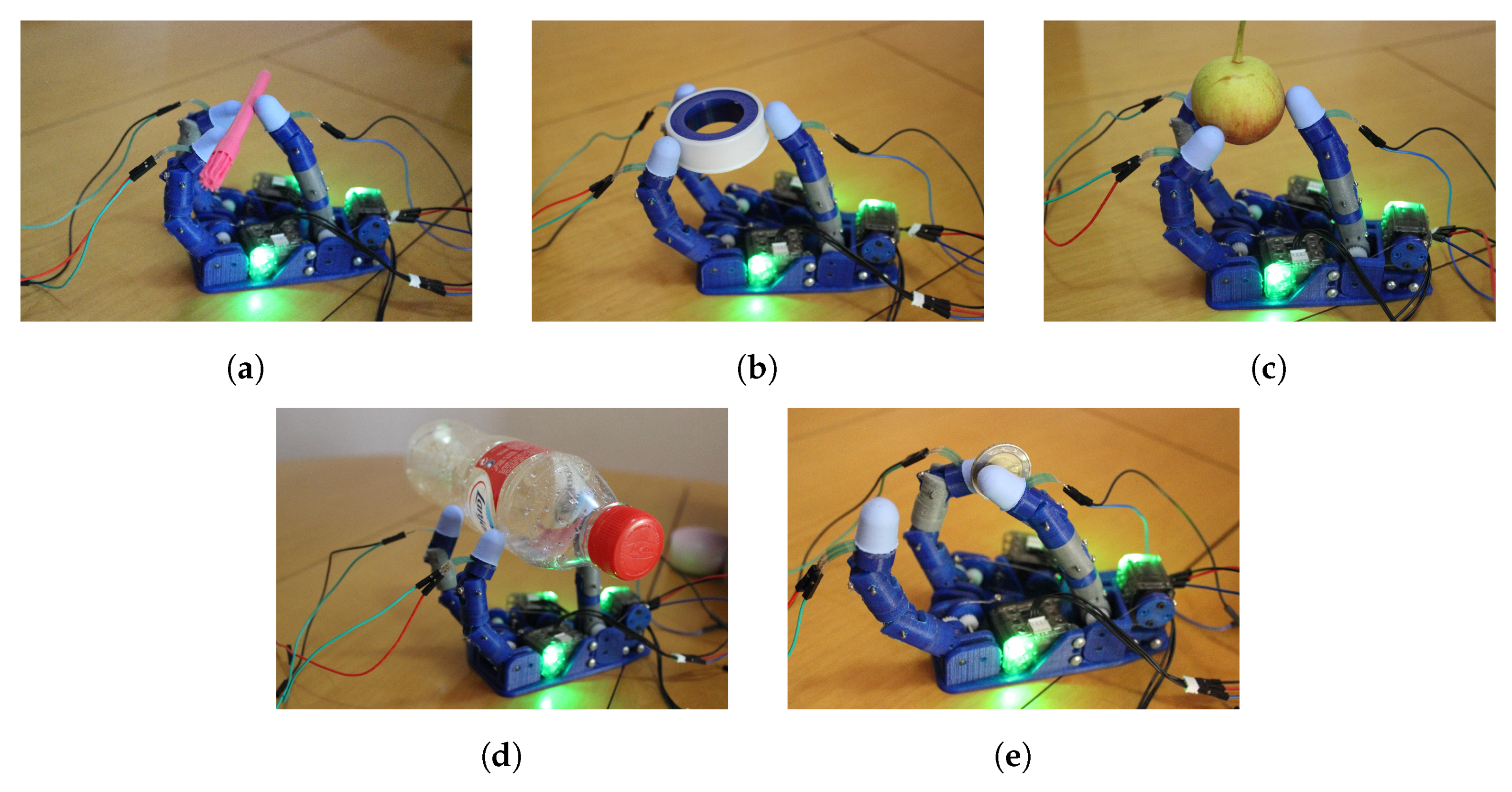