Feline chronic gingivostomatitis (FCGS) has an unclear pathogenesis with the oral microbiome and viral infections, such as feline immunodeficiency virus (FIV), thought to contribute. Although the relationship between the FIV status and FCGS is not clear, one theory is FIV-induced immune dysregulation could contribute to oral dysbiosis, promoting FCGS development. To further understand the relationship between FCGS, FIV infection, and the oral microbiome, oral cavities of forty cats fitting within 4 groups (FIV- without gingivitis, FIV+ without gingivitis, FIV- with gingivitis, FIV+ with gingivitis) were swabbed. Next generation sequencing targeting the V4 region of the 16s rRNA gene was performed for bacterial community profiling. No differences in diversity were observed, however, analysis of the data in terms of gingivitis revealed differences in the relative abundance of taxa and predicted functional output. Odoribacter spp., a bacteria associated with oral disease, was found in higher relative abundances in cats with the highest gingivitis grade. Cats with gingivitis were also found to harbor communities more involved in production of short-chain fatty acids, which have been connected with oral disease. Significant findings associated with the FIV status were few and of low impact, suggesting any connection between the FIV status and FCGS is likely not related to the oral microbiota. View Full-Text
Keywords: microbiota; feline; gingivostomatitis; oral disease; gingivitis; FIV microbiota; feline; gingivostomatitis; oral disease; gingivitis; FIV
►▼ Show Figures 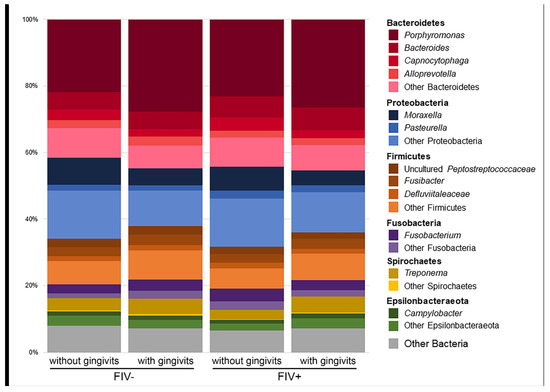