SARS-CoV-2 Vaccines: Inactivation by Gamma Irradiation for T and B Cell Immunity

Brucellosis, globally known bacterial zoonosis, is endemic to Pakistan. B. abortus in bovines, B. melitensis in small ruminants and B. canis in dogs mainly cause this disease. A total of 1821 sera (1196 from sheep and 625 from goats) from animal herds near the Pakistan–Afghanistan border were collected. In parallel testing of sera for anti-Brucella antibodies (B. abortus and B. melitensis) was carried out by RBPT and indirect ELISA. The presence of Brucella DNA in sera was tested by real-time PCR. The overall percentage of seropositive samples was 0.99 (18/1821) by both tests. All positive samples originated from Baluchistan territory which translated into 1.76% (18/1021). None of the positive sera had signals for Brucella DNA and none of sera from goats carried detectable antibodies. Both tests showed an almost perfect agreement with Kappa statistics. The flock size was found to be associated with the presence of anti-Brucella antibodies. The samples of Khyber Pakhtunkhwa (KPK) tested negative in both serological tests and hence were not processed for real-time PCR. The present study shows the presence of anti-Brucella antibodies in sheep in the Baluchistan region of Pakistan. Diagnostic services need to be improved and test and slaughter policies might be implemented for eradication of Brucella infection in these areas. Awareness about the infection is needed at the farmer’s level. Isolation and molecular biology of the isolates could help with understanding the prevailing etiology in a better way. View Full-Text
Keywords: Brucellosis; zoonosis; Baluchistan; KPK; Pakistan Brucellosis; zoonosis; Baluchistan; KPK; Pakistan
►▼ Show Figures 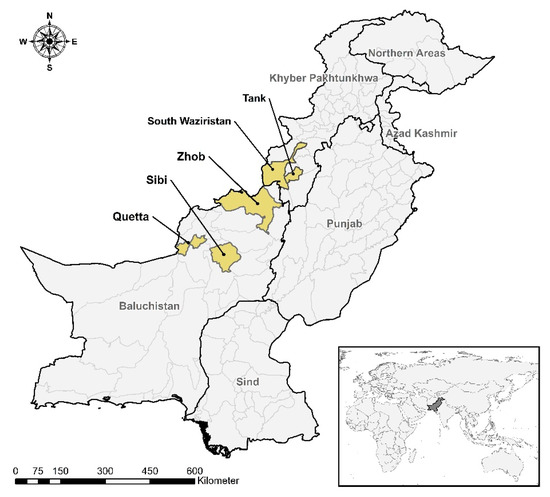