Reviewing the History of Pandemic Influenza: Understanding Patterns of Emergence and Transmission

Varicella-zoster virus (VZV) induces abundant autophagy. Of the nine human herpesviruses, the VZV genome is the smallest (~124 kbp), lacking any known inhibitors of autophagy, such as the herpes simplex virus ICP34.5 neurovirulence gene. Therefore, this review assesses the evidence for VZV-induced cellular stress, endoplasmic-reticulum-associated degradation (ERAD), and autophagic flux during the VZV infectious cycle. Even though VZV is difficult to propagate in cell culture, the biosynthesis of the both N- and O-linked viral glycoproteins was found to be abundant. In turn, this biosynthesis provided evidence of endoplasmic reticulum (ER) stress, including a greatly enlarged ER and a greatly diminished production of cellular glycoproteins. Other signs of ER stress following VZV infection included detection of the alternatively spliced higher-molecular-weight form of XBP1 as well as CHOP. VZV infection in cultured cells leads to abundant autophagosome production, as was visualized by the detection of the microtubule-associated protein 1 light chain 3-II (LC3-II). The degree of autophagy induced by VZV infection is comparable to that induced in uninfected cells by serum starvation. The inhibition of autophagic flux by chemicals such as 3-methyladenine or ATG5 siRNA, followed by diminished virus spread and titers, has been observed. Since the latter observation pointed to the virus assembly/trafficking compartments, we purified VZ virions by ultracentrifugation and examined the virion fraction for components of the autophagy pathway. We detected LC3-II protein (an autophagy marker) as well as Rab11 protein, a component of the endosomal pathway. We also observed that the virion-containing vesicles were single-walled; thus, they are not autophagosomes. These results suggested that some VZ virions after secondary envelopment were transported to the outer cell membrane in a vesicle derived from both the autophagy and endosomal pathways, such as an amphisome. Thus, these results demonstrate that herpesvirus trafficking pathways can converge with the autophagy pathway. View Full-Text
Keywords: autophagy; varicella-zoster virus; cytomegalovirus; herpes simplex virus; glycoproteins; unfolded protein response; ER-associated degradation; XBP1; xenophagy autophagy; varicella-zoster virus; cytomegalovirus; herpes simplex virus; glycoproteins; unfolded protein response; ER-associated degradation; XBP1; xenophagy
►▼ Show Figures 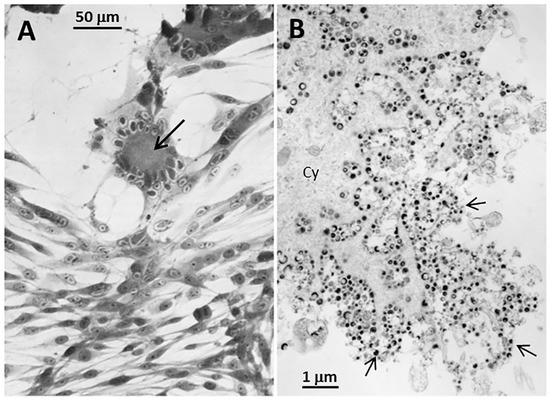