Treatment of Human Babesiosis: Then and Now
Next Article in Special Issue

The composition of bacteria is often altered in Crohn’s disease (CD), but its connection to the disease is not fully understood. Gut archaea and fungi have recently been suggested to play a role as well. In our study, the presence and number of selected species of fungi and archaea in pediatric patients with CD and healthy controls were evaluated. Stool samples were collected from children with active CD (n = 54), non-active CD (n = 37) and control subjects (n = 33). The prevalence and the number of selected microorganisms were assessed by real-time PCR. The prevalence of Candida tropicalis was significantly increased in active CD compared to non-active CD and the control group (p = 0.011 and p = 0.036, respectively). The number of Malassezia spp. cells was significantly lower in patients with active CD compared to the control group, but in non-active CD, a significant increase was observed (p = 0.005 and p = 0.020, respectively). There were no statistically significant differences in the colonization by archaea. The obtained results indicate possible correlations with the course of the CD; however, further studies of the entire archeobiome and the mycobiome are necessary in order to receive a complete picture. View Full-Text
Keywords: fungi; archaea; gut microbiota; Crohn’s disease; gut dysbiosis fungi; archaea; gut microbiota; Crohn’s disease; gut dysbiosis
►▼ Show Figures 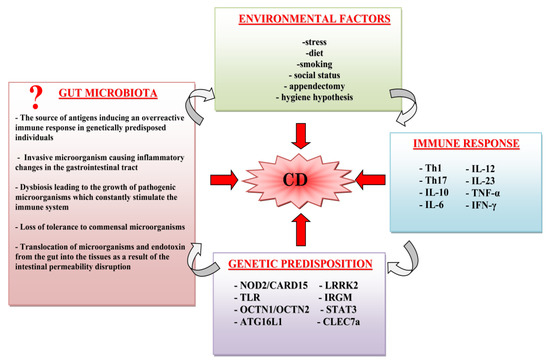