Apicomplexan genomes encode multiple pepsin-family aspartyl proteases (APs) that phylogenetically cluster to six independent clades (A to F). Such diversification has been powered by the function-driven evolution of the ancestral apicomplexan AP gene and is associated with the adaptation of various apicomplexan species to different strategies of host infection and transmission through various invertebrate vectors. To estimate the potential roles of Babesia APs, we performed qRT-PCR-based expressional profiling of Babesia microti APs (BmASP2, 3, 5, 6), which revealed the dynamically changing mRNA levels and indicated the specific roles of individual BmASP isoenzymes throughout the life cycle of this parasite. To expand on the current knowledge on piroplasmid APs, we searched the EuPathDB and NCBI GenBank databases to identify and phylogenetically analyse the complete sets of APs encoded by the genomes of selected Babesia and Theileria species. Our results clearly determine the potential roles of identified APs by their phylogenetic relation to their homologues of known function—Plasmodium falciparum plasmepsins (PfPM I–X) and Toxoplasma gondii aspartyl proteases (TgASP1–7). Due to the analogies with plasmodial plasmepsins, piroplasmid APs represent valuable enzymatic targets that are druggable by small molecule inhibitors—candidate molecules for the yet-missing specific therapy for babesiosis. View Full-Text
Keywords: aspartyl protease; plasmepsin; apicomplexa; piroplasmida; Babesia aspartyl protease; plasmepsin; apicomplexa; piroplasmida; Babesia
►▼ Show Figures 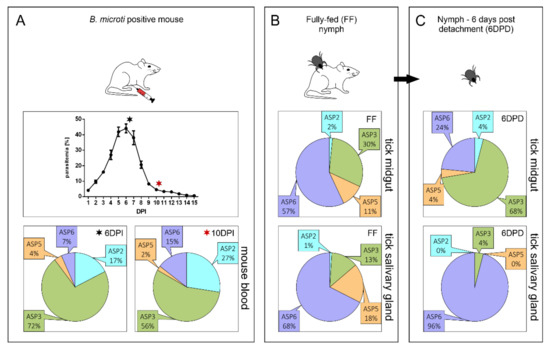