Predicting Loneliness from Where and What People Do

The many devastating mental health outcomes associated with chronic loneliness is the motivation behind research into examining personal and demographic characteristics of the lonely. The present study sought to examine the connection of where people live (degree of urbanization) and what people do (leisure activities) with self-report of loneliness in a large sample (N = 8356) of unrelated Dutch adults. Information regarding where people live and what they do in their leisure time was entered into a regression analysis for self-reported loneliness. The overall regression was significant and accounted for 2.8% of the loneliness scale scores. Significant independent predictors for loneliness were living in heavily urbanized areas and engaging in fewer social activities. People who went sightseeing or to amusement parks/zoos or who participated in clubs reported being less lonely. Spending time using a computer predicted higher self-report loneliness scores. Consistent with previous research, after controlling for other variables, gender was not a significant predictor of loneliness but both a younger age and a curvilinear or U-shaped curve of age predicted loneliness (the younger and the much older). The results suggest that meaningful interpersonal interactions may result in lower feelings of loneliness. View Full-Text
Keywords: lonely; adult; gender; age; urbanization; leisure lonely; adult; gender; age; urbanization; leisure
►▼ Show Figures 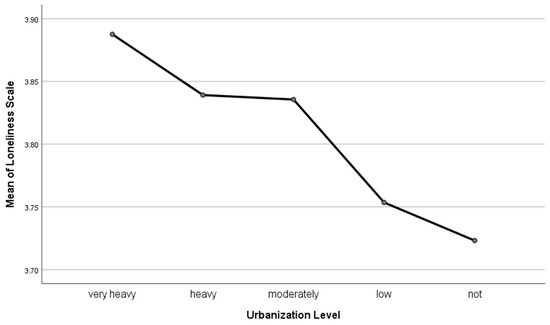