A ‘Lost’ Panel and a Missing Link: Angelos Bitzamanos and the Case of the Scottivoli Altarpiece for the Church of San Francesco Delle Scale in Ancona
Previous Article in Journal

The Horse and the Lion in Achaemenid Persia: Representations of a Duality

With the rise of video games as a new medium for storytelling, scholars have unequivocally posed the question, “Are games stories?” (Salen and Zimmerman 2003, p. 378). Although any computer or video game can be considered a form of popular fiction (Atkins 2003, p. 9) and shares the concept of a diegetic world with other media (Wolf 2002, p. 94), it is commonly believed that games “rely more on the attainment of a particular goal and a win/lose distinction rather than on character and thematic development” (Wolf 2002, p. 105). In the Japanese media industry, video games have proven to be an integral part of the massive media-crossing character-driven story productions encompassing manga, anime, and novels. Stories are quickly produced and delivered through these media to consumers across the globe. The game genre known as visual novels, which are intensely narrative-oriented games in a novel-like format, continues to be a source of stories that had become a driving force of globalizing media culture coming from Japan. These text-based story games raise critical questions about the assumptions about the modern textual values of the novel while being continuously marginalized from the literary authenticity nurtured in scholarly discourses. The types of gameplay deeply engaged in making and reading stories will reshape narrative forms and even human perceptions into new epistemological frameworks deeply affected by video games. As texts move online and media turn visual, studies of narrative gameplay as literary innovations will help challenge the concept of literature more vigorously. However, existing discussions of the visual novel games largely neglected the simple fact that these game narratives converge on romance stories and disseminate new concepts of romantic love as formulated by gameplay. They have also excluded female gamers from study and thereby presumed that male-centered characteristics unconditionally extend to the entire genre.
This article will compare two sub-categories of romance games commonly defined based on the player’s and the player character’s gender: romance adventure or simulation games for men called bishōjo games and those for women known as otome games. Many of the bishōjo games are released as “visual novels” or text-based adventure games, which employ a tree diagram with branching scenarios and multiple endings. By contrast, otome games have sustained hybridity incorporating novel-like traits and gaming elements, such as RPG and strategy. This article will examine the interfacial arena between textual narrative and gaming, thereby delineating the roles of narrative and romantic love across the player character’s gender differences in simulating incommensurable experiences of romance as gameplay. This in no way means that there is a uniform formula for all otome games or bishōjo games, nor that the difference between bishōjo games and otome games are equal to those of male and female genders. This study applies a qualitative approach to selected textual examples that have been particularly innovative or commercially successful. It signifies that many titles do not appear in the discussions, whereas there are over 500 titles of commercially released otome games and thousands of bishōjo games, excluding those exclusively produced for smartphones. I will address them as different modes of gameplay and as different ideologies of romance that closely mirror gender codes and inequalities in reality. The romance game genre reinvents contemporary notions of romantic love through new forms of human–machine interaction and narrative structures characteristic of gameplay and thereby poses critical questions on changing modes of romance.

4. Voice and the Visual Form

Video games are powerful narrative media that continue to evolve. Romance games, which stemmed from text-based adventure games and are today known as visual novels and romance adventures, are particularly strong textual corpus that explores narrative forms formulated by interaction with computer-generated texts. With the anachronistic adoption of technology in contrast to the trends of video game industries driven by spectacles and mimetic reality, they have developed narrative forms that amalgamate literary narrative strategies and interfacial qualities of video games. I have argued that men’s romance games, despite academic discussions of these games as paramount of postmodern culture, tend toward the reaffirmation of modern perceptions of romantic love as free will and thereby revalidates the illusion of gaining authorial control over the text. Facing the parallel plots and looped gameplay, the player learns to overcome divergences by finding the sole love object and thereby acknowledging one’s patriarchal power of choice. Otome games have displayed decentering approaches to reading, including resistance to immersion or identification and strong skepticism about the authorship of the (hi)story. They show tendencies to sustain male-centric gender codes and historical settings, which further marginalize PC and foreclose the player from the game world. Otome games accordingly expect more interaction and mediation with the game system itself: the complexity of interaction, in turn, contributes to the illusion of a romantic relationship with the game. I have applied theories of voice fetishism to investigate further the general absence of rewards that are present in bishōjo games, especially the pleasure of attaining power and gaining the sexual body of LIs. This otome game model compels more interfacial labor and promotes fetish reward across multiple boundaries dividing the player, characters, texts, and imaginary real behind the game.
The investigation of romance games did not only reveal differences between the bishōjo game paradigm and the otome game paradigm but also proved bishōjo games’ narrative affinities with literature and otome games’ resistance to them. The narrative advantages of video games over the literary texts, especially the parallel plots and freedom given to the player over the choice of LIs and their scenarios, undermines the modern literary conventions of linear progress and chronological historicity, but these same advantages simultaneously yield to the ideology of the self built on modern values. Otome games transpose locations of pleasure and subjectivity through the displacement of narrating subjects across eroded boundaries of gameplay. This proves established narrative forms, as employed in literature and film, need to face with seriousness the challenges of emergent narrative components and disintegration of subjectivity.

The cited images are unaltered and used for academic purposes only. 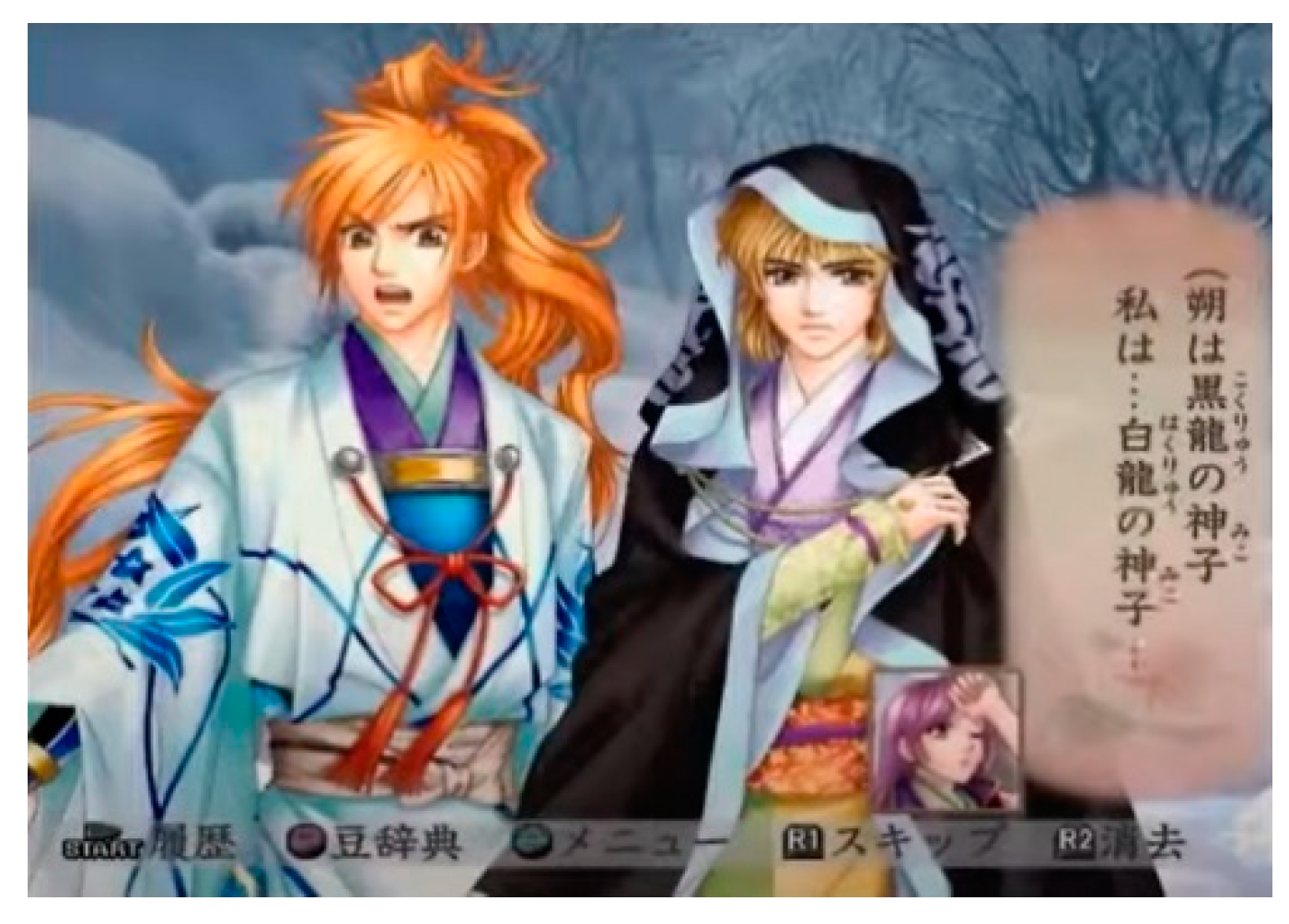