To obtain the flow stress–strain relation for the AL5052-O sheet, a series of uniaxial tensile tests were performed following the ASTM-8 standard (Figure 1a) procedure at a constant tensile speed of 10 mm/min with a gauge length of 50 mm. To increase the accuracy and reduce the effect of the cutting process on the surface of the specimens, the laser cutting method was used to prepare the specimens.
To evaluate the anisotropic plasticity behavior of the AL5052-O sheet, uniaxial tensile tests were conducted in three different directions with respect to the rolling direction, 0°, 45°, and 90°. The material properties of the AL5052-O sheet are summarized in Table 1, including Young’s modulus (E), ultimate tensile strength (UTS), and elongation (). The initial yield stress and material anisotropy R-values are also reported for the three directions (,). Figure 1b displays the true stress–true strain curves of the studied material for the three different orientations. Through the differences in the initial yield stresses and plastic strain ratios for the three different orientations, Table 1 demonstrates that the AL5052-O sheet is an anisotropic material. Furthermore, Figure 1 clearly shows that the flow curves in different directions are represented by different curvatures, exhibiting distinct tensile strength, elongation, and necking area.
Conventionally, either the Swift equation (power law) or the Voce equation (exponent law) can be used to describe the strain hardening behavior of sheet metals. However, the use of these equations to predict the post-necking behavior of sheet metals remains questionable, as indicated by Coppieters et al. [6]. Therefore, in this research, the Kim–Tuan model, is proposed to model the stress–strain relation of the AL5052-O sheet material and successfully describe the material behavior on both sides of the necking point: pre-necking and post-necking behaviors. The formulation of the Kim–Tuan (K–T) hardening model is expressed as follows: where KT, m, and c are the parameters of the proposed equation, and m is a dependent parameter calculated as follows:
Here, (,) represents the initial yield point of the true stress–true strain curve and (,) the plastic strain and stress according to the maximum tensile force point. The parameter is a dependent parameter whose value is independent of other parameter values. Therefore, the parameters KT and c in the Kim–Tuan model are calculated using the curve fitting tool, which is available on some optimization packages such as Excel or MATLAB. The Kim–Tuan equation can be easily reduced to the Swift equation when is ignored and c is infinity. In addition, this equation can be simplified to the Voce equation when the parameter is zero.
Figure 2 exhibits the curve fitting results for the AL5052-O sheets using three different strain hardening models: the Swift power law, Voce exponent law, and Kim–Tuan equation. In the three models, the Kim–Tuan hardening model enforces the work hardening rate or the slope of the stress–strain curve () at the maximum tensile force point of the fitted curve equal to that of the experiment. Due to this, the proposed equation is advantageous for studying the post-necking behavior of sheet metals without requiring any other plasticity properties, except the stress–strain data from the uniaxial tensile test.

The AL5052-O sheet part is formed by incremental sheet forming, as shown in Figure 3a. In this test, we employed the two-wing star toolpath, as shown in Figure 3b. The other forming parameters include a tool diameter of 10 mm, vertical step of 0.25 mm, feed rate of 200 mm/minute, and MoS2 lubrication to eliminate the sliding friction between the tool and the sheet. The forming speed was selected at a low value to get the strain rate as low as the uniaxial tensile test. A specimen with a size of 140 mm × 60 mm is clamped on the straight-groove die, which was made from SKD11 steel to support the blank shoulder. Position A and B are higher than the initial sheet plane, which means the tool is not in contact with the sheet metal at these positions. The tool moves in the order of A-O-B with a downward distance in the center O to finish the first depth increment. For the second depth increment, the movement follows the order of B-O-A. The process is repeated in the next depth increment until a fracture occurs.
As shown in Figure 3c, when the tool continuously descends to the center position and causes the area to fracture, the test stops immediately.

An AL5052-O sheet was used for this study. It is undeniable that AL5052-O is an anisotropic material owing to both the tensile strength mean and the anisotropic plastic ratio [23]. From this perspective, anisotropic functions should be used to derive the plastic work behavior of this material; thus, Hill’s 1948 yield criteria were considered to describe the plastic work behaviors of the studied material [24]. The parameters of yield function (F, G, H, and N) were calculated based on the strain terms (). Further formulation of Hill’s quadratic function can be found in [24]. Table 2 shows the parameters of these functions.
The yield criterion, as a function of all state variables, can be written in a generic form as where is a continuously differentiable yield function and is a back-stress tensor in the kinematic hardening model; if is ignored, the yield criterion returns to isotropic hardening model. In addition, is the equivalent plastic strain, and is the work hardening rule, which is generally represented using the Swift, Voce, or Kim–Tuan equation.
The evolution of the back-stress tensor is modeled based on the nonlinear kinematic hardening theory of the so-called Armstrong–Frederick model (AF model):
Here, tensor is defined as ; C and are material constants. For the AL5052-O material, C and are 1118.26 MPa and 23.694, respectively.
Hill’s 1948 anisotropic yield function in the plane stress condition is where is the yield stress in the reference direction and F, G, H, and N are constant characteristics of the anisotropy, defined as follows:

3.2. Calibration of Stress–Strain Curve Up to Large Strain Range

The inverse method using the ISF process coupled with FEM simulation was used in this study which gives a new strategy to define the stress–strain curve up to a large strain range. First, the experiment to measure the forming force in ISF was performed. Then, the FEM simulation by ABAQUS/Explicit was performed using the incremental stress–strain curve, accompanied by Hill’s 1948 yield behavior. The incremental stress–strain curve was selected at each strain increment of 0.05 to simulate the forming process. Each corrected trial stress was selected for each trial strain value when the force prediction was in good agreement with the experiment. Using this method, the best-fitted trial stress–trial strain curve was calibrated up to large strain ranges, compared to the tensile test or conventional press forming process.
At the same time, it is worth noting that the Kim–Tuan hardening equation has a good ability of prediction for stress–strain in a large strain range because the hardening rate at the point of maximum tensile force is considered.
Without loss of generality, the hardening behavior of sheet metals correlates well to the forming force required to deform the sheet during ISF processes. This work draws an early step on the calibration material model by using the ISF process. Future works should be conducted to identify material models for different automotive sheet metals to verify the robustness of the proposed method. At the same time, the effects of process parameters, such as tool diameter, tool speed rate, and so on, on the calibrated results should be investigated in the forthcoming paper. 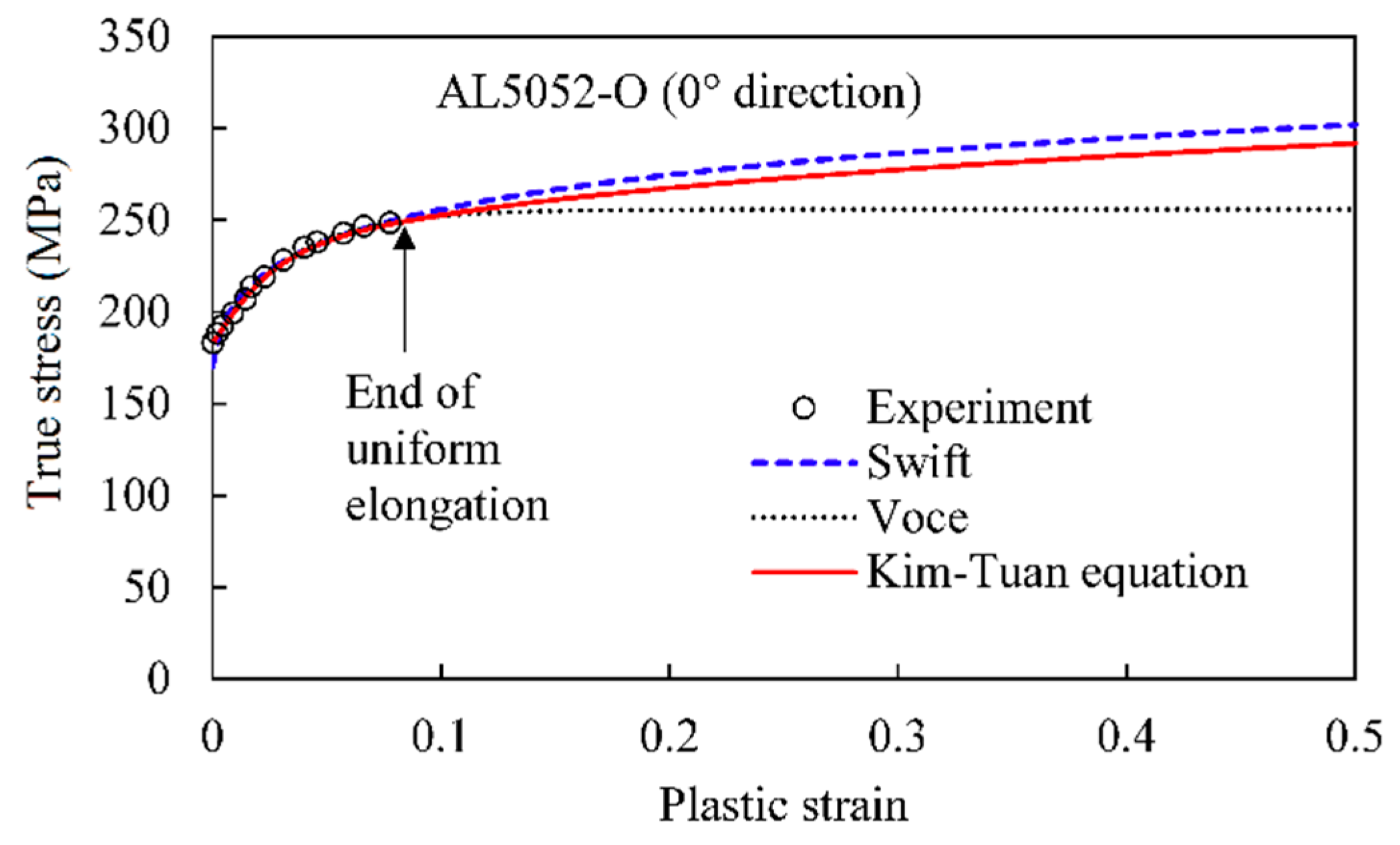 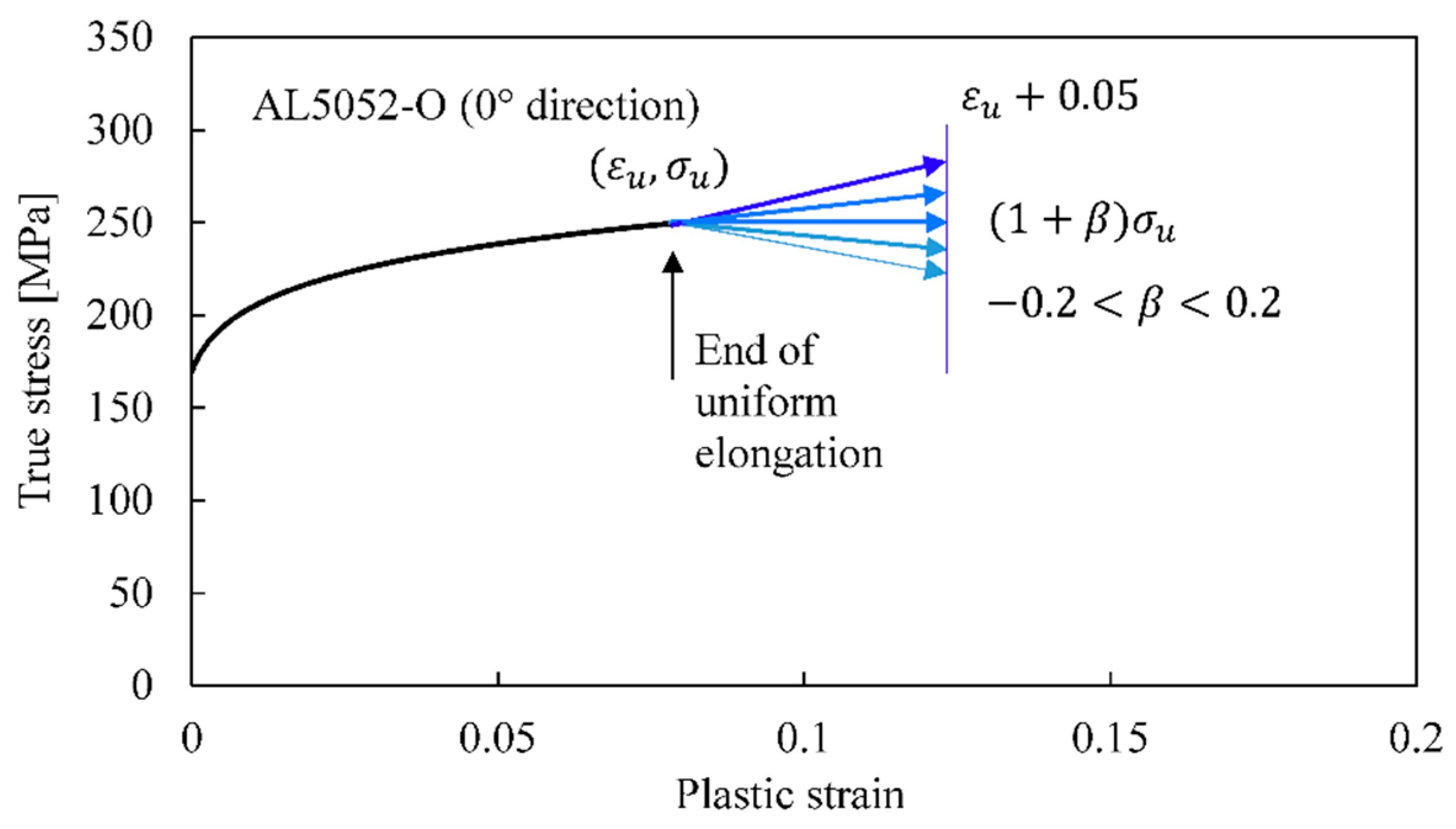