Hydrogen Ironmaking: How It Works

Toward a Fossil Free Future with HYBRIT: Development of Iron and Steelmaking Technology in Sweden and Finland

The three Swedish companies SSAB (steel company), LKAB (mining company), and Vattenfall AB (energy company) aim at creating the first fossil-free value chain from mining to finished steel. The initiative is based on the importance of steel as a material for the development of the modern society and the big impact of today’s production lines on the emission of fossil-based carbon dioxide.
Steel is 100% recyclable and has eternal applications including transportation, energy, drinking water, food production, buildings, and infrastructure. Volume wise, steel is the dominating material, and the global steel demand is estimated to increase from 1800 in 2018 to 2500 million tons in 2050 [1].
In the Paris agreement from 2015 [2], countries of the world agreed on a new global climate strategy that provides the framework for future long-term climate efforts. The global annual CO2 emission from the steel industry is currently around 2.8 billion ton corresponding to 7% of the global total CO2 emission. As illustrated in Figure 1, to reach the goals of global temperature increases of maximum 2 °C defined in the Paris agreement, the emission from the steel industry should be decreased to a level of 400–600 million ton per year in 2050 at the same time as the forecasted production volumes will increase.
In Sweden, following the Paris agreement, the parliament has adopted a climate law with the target that Sweden should have no net emissions of greenhouse gases by the year 2045. Furthermore, a long-term agreement was reached between the majorities of the left- and right-wing political parties, where it was confirmed that the Swedish electricity production should aim at 100% renewable energy sources by the year 2040.
In Finland, a climate plan was presented in 2019 with the target that Finland shall be carbon-neutral by 2035 with the ambition to be “the first fossil-free welfare society”.
SSAB has at its Nordic production units a total annual CO2 emission of around 9 million tons, as shown in Figure 2, of which 5 million tons are emitted in Sweden corresponding to 10% of the total emissions in the country. The corresponding figures for the Finnish production are 4 million tons and 7% respectively of total Finnish emission.
In the present paper, the HYBRIT (Hydrogen Breakthrough Ironmaking Technology) project, a Swedish initiative between the three companies SSAB, LKAB, and Vattenfall AB, is described.

Scandinavia has a very long history in iron and steelmaking based on abundant natural resources in forests, hydro-power, and high-grade iron ores. Globally as well as in Scandinavia, the steel industry in periods has met big challenges that have resulted in changes of the industrial landscape, as shown in Figure 3 [3].
In the beginning of the 18th century, Sweden dominated global steel production. During a few decades in the late 1700s and the beginning of the 1800s, Sweden’s share of the global production was around 35%. This leading position changed rapidly to below 10% when expensive charcoal could be replaced by low-cost natural coal to produce commodity products. Many of the small iron and steelworks went into bankruptcy. A similar development could be seen in the second half of the 19th century. Around 1860, Sweden had 225 blast furnaces in operation. The introduction of processes such as Bessemer, Thomas, and Martin replaced different kinds of small-scale steelmaking processes, resulting in the closing of many iron and steelworks.
During the 20th century, several efforts were made in Sweden to replace the blast furnace. The common aim of these developments was to decrease or eliminate the need for the agglomeration of iron ore fines and to avoid dependence on coking coal. In some cases, the aim was also to find effective solutions to process the Swedish high-phosphorus iron ores. These initiatives peaked in the 1970s when several processes [4] were under development such as INRED, ELRED, Plasmasmelt, and the KTH-converter smelting reduction process. All of these were run on a pilot scale, and the KTH-converter process was also used for coal gasification in a converter combined with iron production.
Extensive research was performed around 1980 in a Swedish national program—Steel Production from High-phosphorus Iron Ore [5], where the focus was on the LKAB iron ores and the challenges facing the steel industry. The production process from mining to the production of the finished product was thoroughly studied in cooperation between academia and the industry. In this program, which was performed both on a national and international level, knowledge and competence was developed, which contributed to the competitive iron and steelmaking technology still used in Sweden.
Today, the Swedish high-phosphorus iron ores are upgraded to pellets with very low phosphorus content, which together with the development of both pellet properties and blast furnace technology have given world-leading results and low emissions. These achievements are based on a long-term close cooperation between LKAB and SSAB.
With an annual Nordic iron ore-based steel production of around 6 million tons, the focus today is on niche products for special purposes and high customer values. This strategy has made the industry competitive despite, from a global perspective, limited production volume. In addition to a very strong focus on product development both regarding iron ore products and finished products, there has been extensive activities regarding process development to improve productivity and decrease fuel consumption in the different production steps. The most significant development step is the joint development effort at LKAB and SSAB in the beginning of the 1980s with the self-fluxing olivine pellet, which resulted in the significant efficiency improvement of the combined LKAB–SSAB production value chain from iron ore to crude steel.
In Figure 4, the development of fuel consumption at LKAB for iron–ore agglomeration from 1960 until today is given in oil equivalents. The decrease is from 50 L per ton in 1960 to 8 L per ton pellet in 2013. The CO2 emissions have decreased from 192 kg/ton product in 1960 to 31 kg in 2013. The step from shaft furnace to grate kiln resulted in a significant improvement, and new generations of pelletizing processes during the following decades resulted in further improvements, as shown in the figure below. To further decrease/eliminate these emissions, special actions must be taken.
The modern blast furnace is a very effective and advanced unit with sophisticated process control systems. SSAB, which today has a world-leading position in blast furnace fuel rate, has in total five blast furnaces in Sweden and Finland. The blast furnaces are all run with 100% self-fluxing iron ore pellets, and pulverized coal injection (PCI) is performed. Figure 5 gives the development during the last decades at the SSAB blast furnace in Luleå, Sweden. The fuel rate today is on average 450–460 kg per ton of hot metal, of which around 150 kg comes from PCI. The slag volume is very low: around 120 kg per ton of hot metal.
Several initiatives [6] have been taken globally during the last decades to decrease CO2 emissions and to further develop the blast furnace and to utilize the process as a flexible tool for different fuels. Examples are replacing PCI with bio-coal or recycled plastic materials, top gas recycling, the plasma heating of blast, the injection of hydrogen from coke oven gas or hydrogen produced with electricity, the further increased injection of oxygen, etc. There are also ongoing investigations, including Carbon Capture and Storage (CCS) for the storage of produced CO2 and utilization of the produced CO2 as a raw material to produce different chemicals (CCU). It is obvious that several initiatives are needed to solve the very demanding situation for the industry.
Pilot plant experiments within the European ULCOS (Ultra–Low Carbon dioxide (CO2) Steelmaking) project [7] carried out at LKAB’s experimental blast furnace at the research institute SWERIM in Luleå Sweden showed that when modifying the blast furnace with top gas recirculation combined with CCS, a reduction of approximately 50% CO2 emission is achievable.
Within SSAB´s Raahe unit in Finland, full-scale experiments were performed during 2019 aiming at replacing fossil coal with bio-coal [8]. It was shown that replacing 5–20% of the PCI coal with bio-coal is technically feasible and would, with the highest rates of bio-coal injection in the blast furnace in question, give a CO2 emission reduction of 200,000 ton/year. The limiting factor is the availability of bio-coal.

The climate change has put a lot of focus on global CO2 emissions. All sectors of the society including energy, agriculture, transportation, construction, and industry are affected by the situation. Regarding the steel industry, several initiatives are ongoing, which is very important depending on the technical risks and geographical differences regarding the availability of energy and raw materials.
In the present paper, which gives a general overview of the HYBRIT project, some findings and a future strategy are described. So far, the results look promising, and the very broad competence areas including energy supply and hydrogen production, mining, and the development of pellets for direct reduction and iron and steelmaking strengthens this belief. The planned pilot plant experiments will be critical for the scaling up of this technology.

The Swedish Energy Agency, through the Swedish Industrial Leap program, together with the three companies involved, have provided financial support to HYBRIT Development AB. 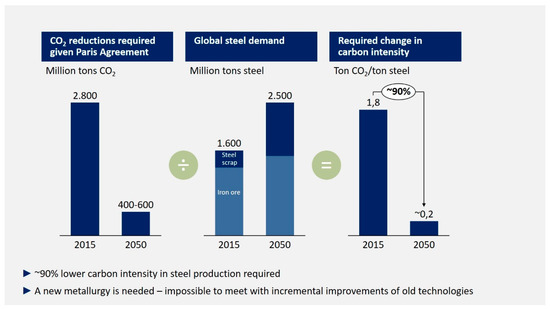 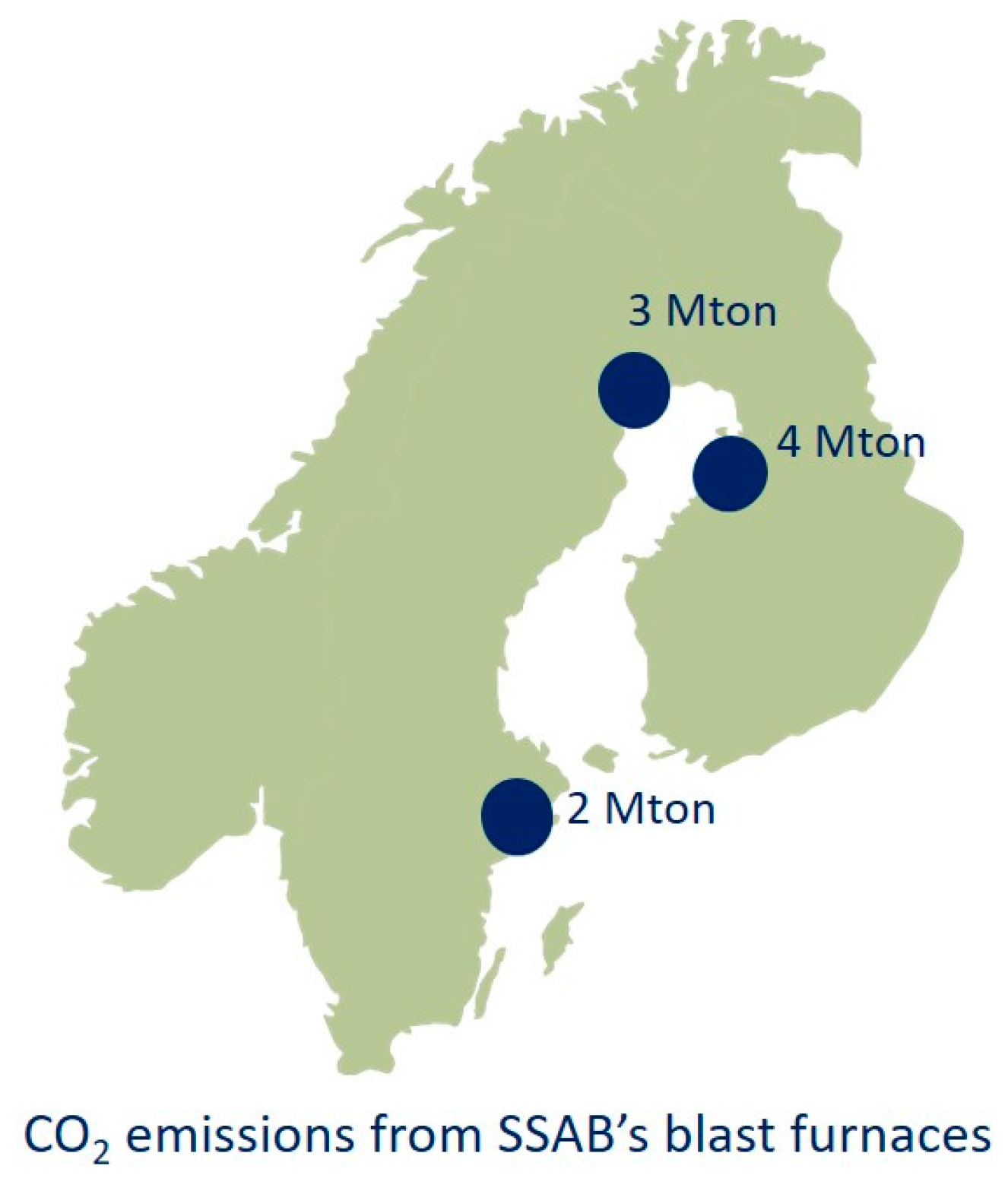 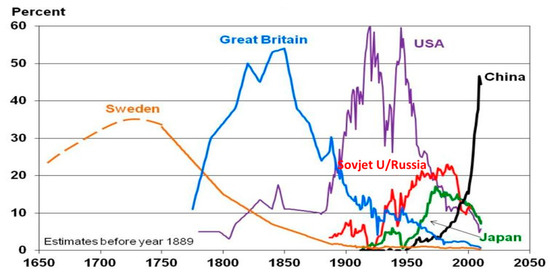 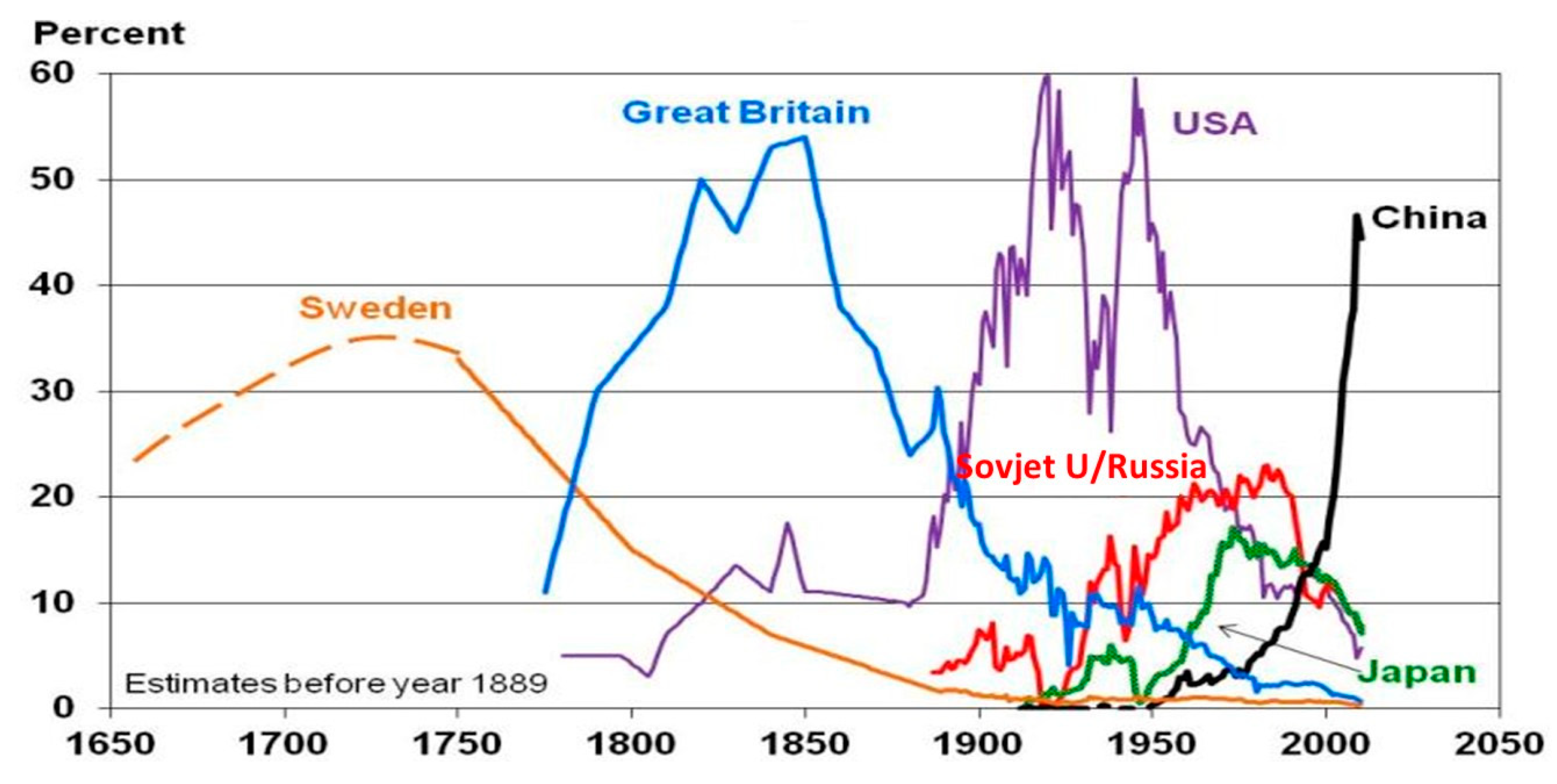 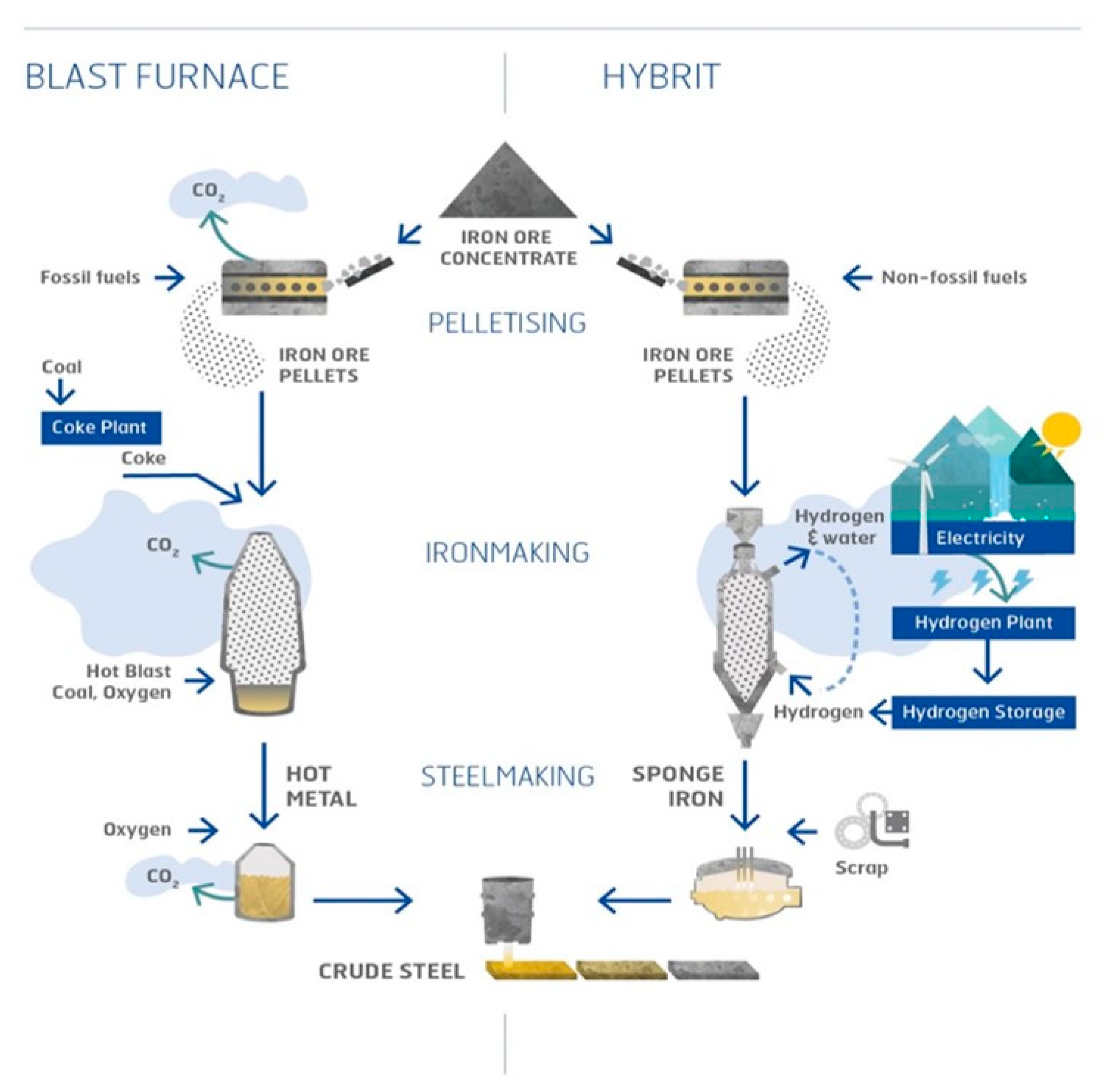 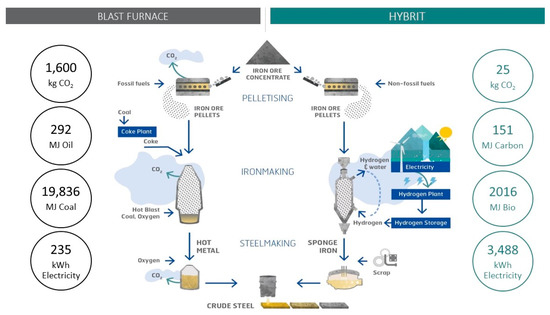 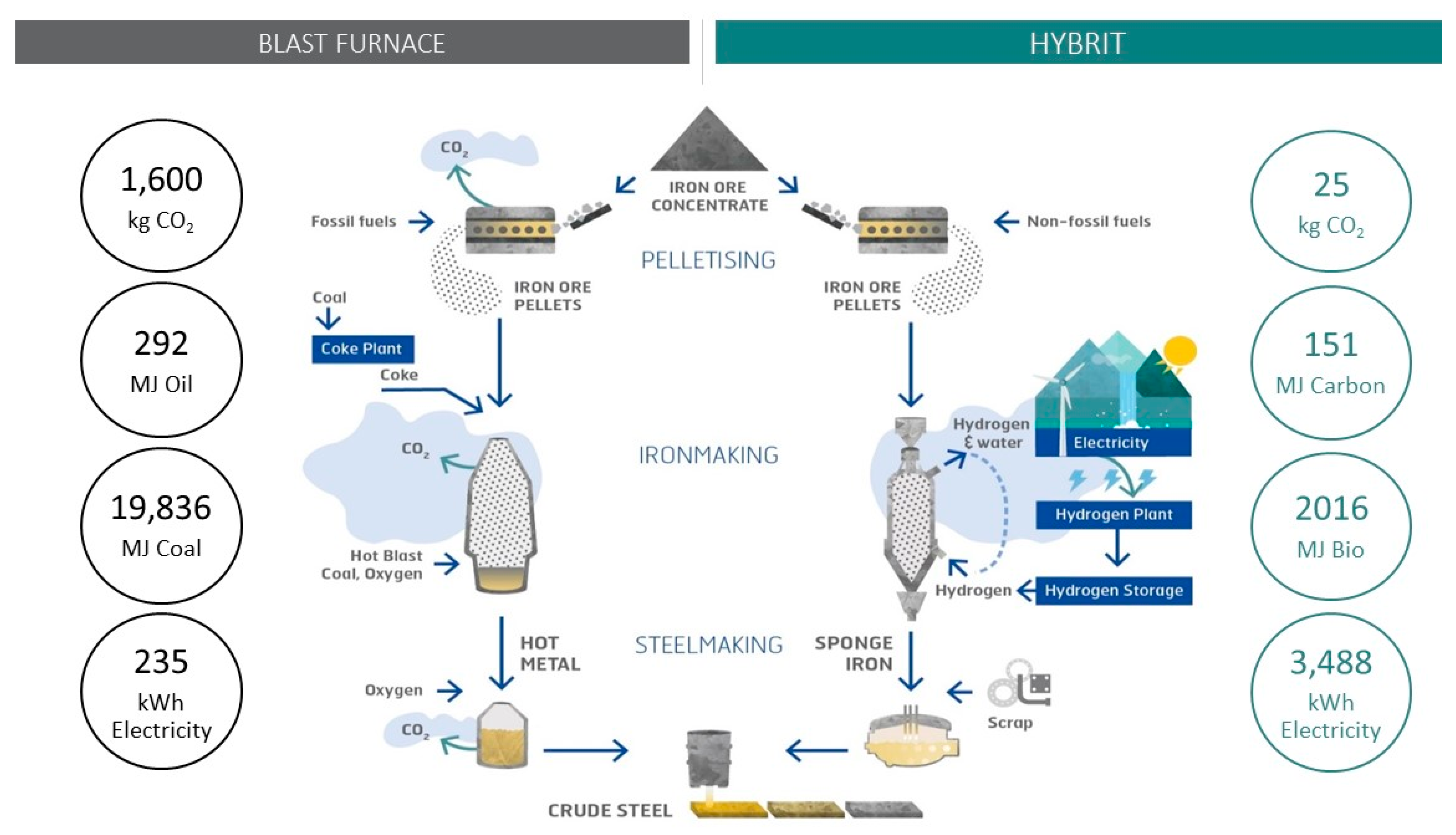 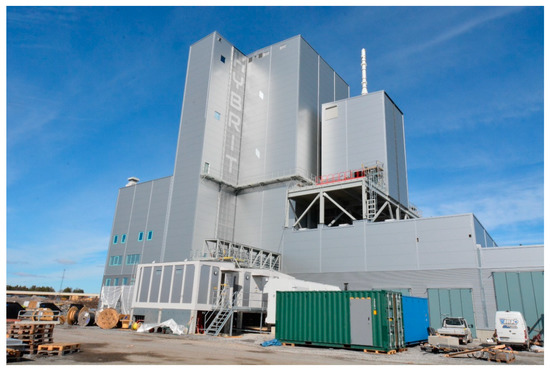 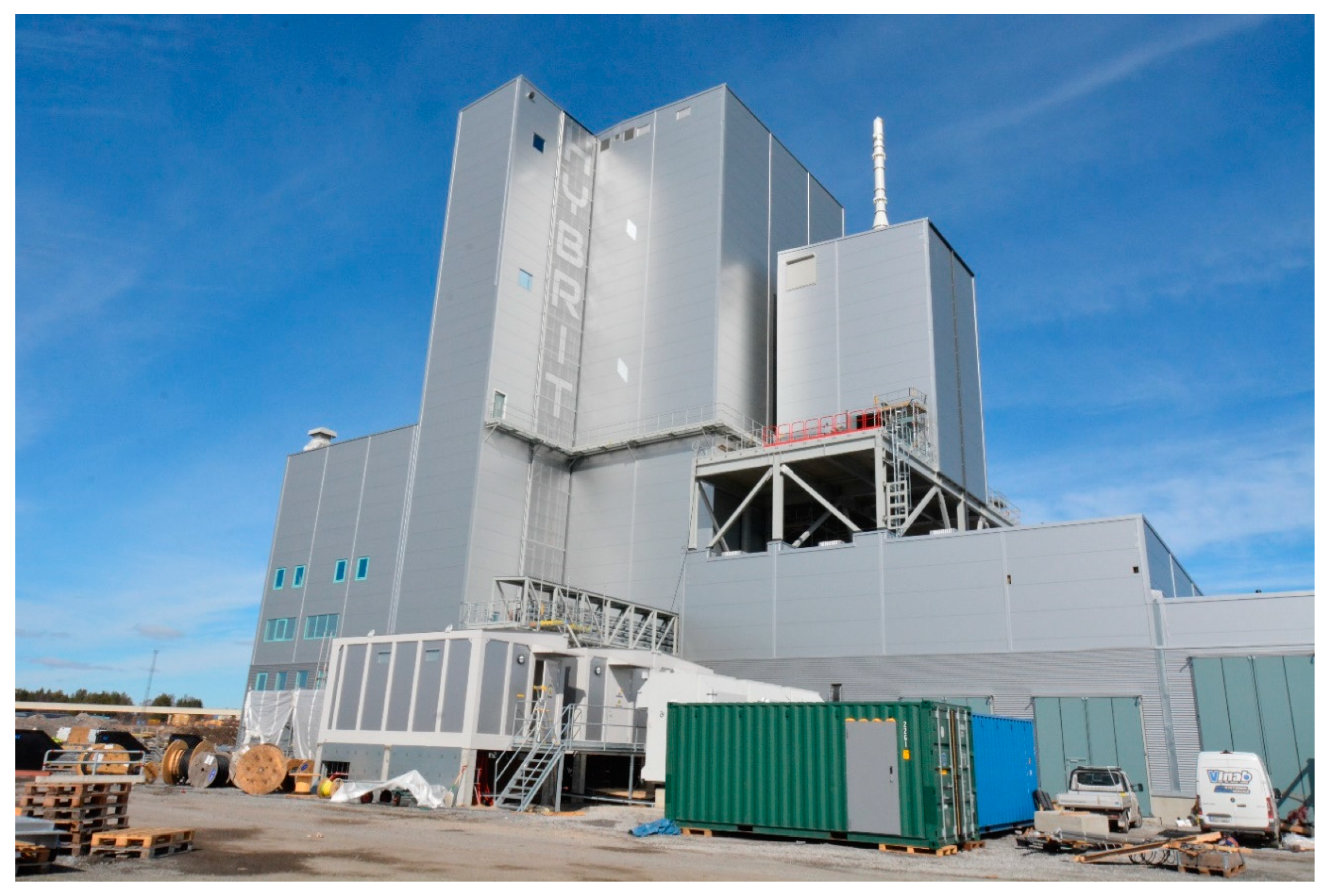 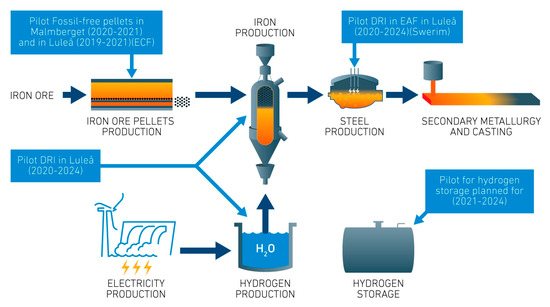 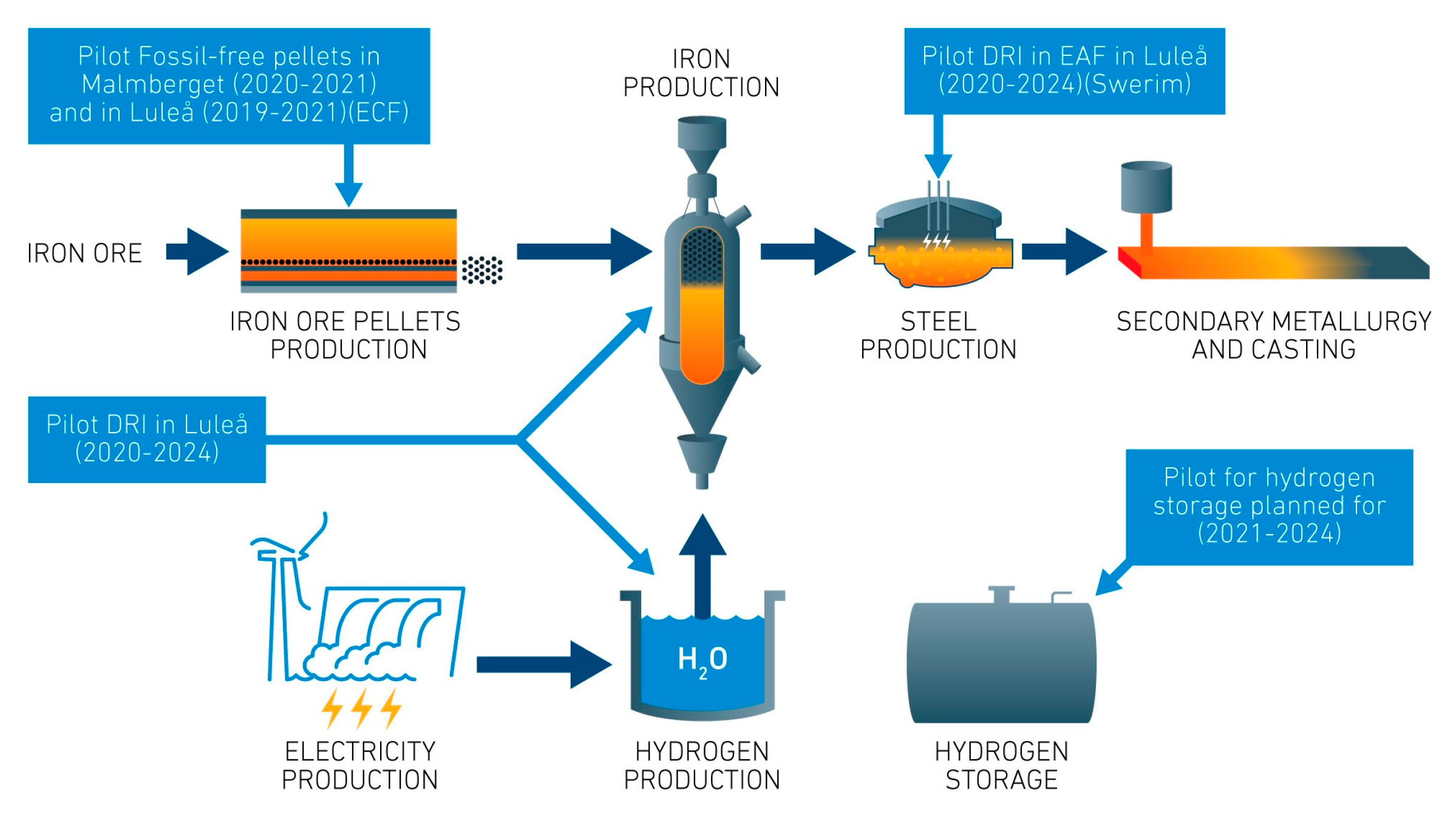