Under compressive testing at 400 °C and a strain rate range of 0.05–5 s−1, the hot deformation behavior and microstructure evolution of an as-cast (AC), as-extruded (with a bimodal grain structure (named as Ex-1) or a relatively uniform fine grain structure (Ex-2)) WE43 alloy have been investigated and compared. The results indicate that the AC sample exhibits the highest peak stress, while the Ex-2 sample has the lowest value. Within the AC material, fine grains were firstly formed along the pancake-like deformed grains (as a necklace structure). The necklace structure was also formed within the Ex-1 and Ex-2 materials at high strain rates of 0.5 and 5 s−1. However, a lamellar structure that the coarse elongated grains divided by parallel boundaries was formed within the Ex-1 material. A relatively more homogeneous fine grain structure is achieved after a true strain of 1.0 within the Ex-2 material at a low strain rate of 0.05 s−1. In addition, a discontinuous dynamic recrystallization mechanism by grain boundary bulging is found to occur. After a true strain of 1.2, a (0001) fiber texture, a typical rare earth (RE) texture, and a relatively random texture are formed within the AC, Ex-1, and Ex-2 WE43 alloy material, respectively. View Full-Text
Keywords: WE43 alloy; compressive deformation; deformation behavior; microstructure evolution; texture WE43 alloy; compressive deformation; deformation behavior; microstructure evolution; texture
►▼ Show Figures 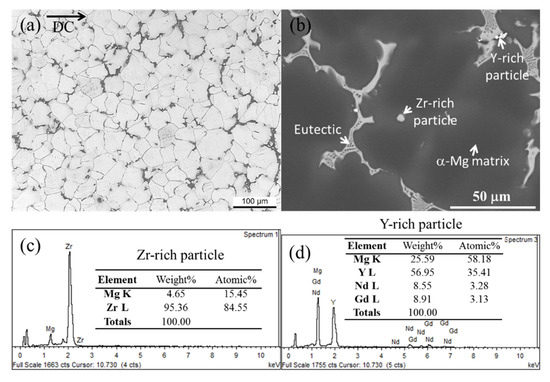