A Cross-Cultural Adaptation of the ICECAP-O: Test–Retest Reliability and Item Relevance in Swedish 70-Year-Olds

Background: While there is a plethora of Quality of Life (QoL) measures, the Investigating Choice Experiments for the Preferences of Older People—CAPability index (ICECAP-O) is one of the few that taps into the concept of capability, i.e., opportunities to 'do' and 'be' the things that one deems important in life. We aimed to examine test–retest reliability of the ICECAP-O in a Swedish context and to study item relevance. Methods: Thirty-nine 70-year-olds who took part in a population-based health study completed the Swedish version of the ICECAP-O on two occasions. We analyzed the test–retest reliability for the index and for the individual items. Participants also rated the relevance of each item on a visual analogue scale (0–100). Results: Test–retest reliability for the index score was in good agreement with an ICC of 0.80 (95% CI 0.62–0.90). However, Kappa was low for each item and ranged from 0.18 (control) to 0.41 (role). For attachment, we found a systematic disagreement with lower ratings at the second test occasion. Participants gave their highest relevance rating to attachment and lowest to enjoyment. Conclusion: The Swedish version of the ICECAP-O had good test–retest agreement, similar to that observed for the English version. Item level agreement was problematic, however, highlighting a need for future research. View Full-Text
Keywords: capability; older persons; ICECAP-O; ICECAP; quality of life; well-being; questionnaire; reliability capability; older persons; ICECAP-O; ICECAP; quality of life; well-being; questionnaire; reliability
►▼ Show Figures 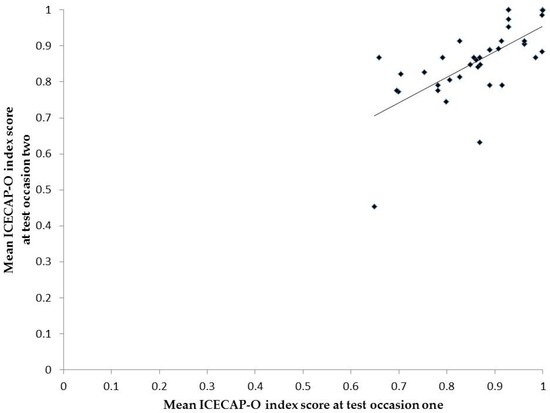