Shadow Management: Neoliberalism and the Erosion of Democratic Legitimacy through Ombudsmen with Case Studies from Swedish Higher Education
Previous Article in Journal

Are Danes’ Immigration Policy Preferences Based on Accurate Stereotypes?

Stereotypes about 32 country-of-origin groups were measured using an online survey of the adult, non-elderly Danish population (n = 476 after quality control). Participants were asked to estimate each group’s net fiscal contribution in Denmark. These estimates were then compared to the actual net fiscal contributions for the 32 groups, taken from a report by the Danish Ministry of Finance. Stereotypes were found to be highly accurate, both at the aggregate level (r = 0.81) and at the individual level (median r = 0.62). Interestingly, participants over- rather than underestimated the net fiscal contributions of groups from countries with a higher percentage of Muslims. Indeed, this was true at both the aggregate and individual levels (r = −0.25 and median r = −0.49, respectively). Participants were also asked to say how many immigrants from each group should be admitted to Denmark. There was a very strong correlation between participants’ aggregate immigration policy preferences and their estimates of the 32 groups’ fiscal contributions (r = 0.98), suggesting that their preferences partly reflect accurate stereotypes. Most of the analyses were pre-registered. View Full-Text
Keywords: stereotypes; stereotype accuracy; immigration; policy preferences; Denmark stereotypes; stereotype accuracy; immigration; policy preferences; Denmark
►▼ Show Figures 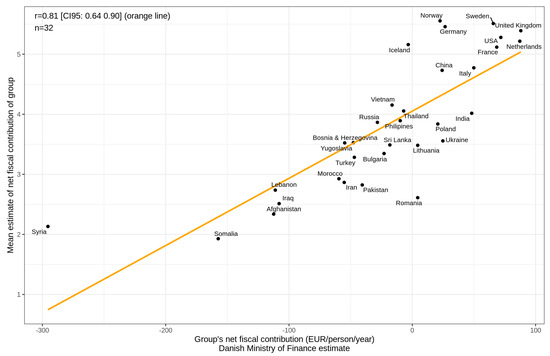