Do Bodybuilders Use Evidence-Based Nutrition Strategies to Manipulate Physique?

Competitive bodybuilders undergo strict dietary and training practices to achieve an extremely lean and muscular physique. The purpose of this study was to identify and describe different dietary strategies used by bodybuilders, their rationale, and the sources of information from which these strategies are gathered. In-depth interviews were conducted with seven experienced (10.4 ± 3.4 years bodybuilding experience), male, natural bodybuilders. Participants were asked about training, dietary and supplement practices, and information resources for bodybuilding strategies. Interviews were transcribed verbatim and analyzed using qualitative content analysis. During the off-season, energy intake was higher and less restricted than during the in-season to aid in muscle hypertrophy. There was a focus on high protein intake with adequate carbohydrate to permit high training loads. To create an energy deficit and loss of fat mass, energy intake was gradually and progressively reduced during the in-season via a reduction in carbohydrate and fat intake. The rationale for weekly higher carbohydrate refeed days was to offset declines in metabolic rate and fatigue, while in the final “peak week” before competition, the reasoning for fluid and sodium manipulation and carbohydrate loading was to enhance the appearance of leanness and vascularity. Other bodybuilders, coaches and the internet were significant sources of information. Despite the common perception of extreme, non-evidence-based regimens, these bodybuilders reported predominantly using strategies which are recognized as evidence-based, developed over many years of experience. Additionally, novel strategies such as weekly refeed days to enhance fat loss, and sodium and fluid manipulation, warrant further investigation to evaluate their efficacy and safety. View Full-Text
Keywords: protein; peak week; refeed day; supplement protein; peak week; refeed day; supplement
►▼ Show Figures 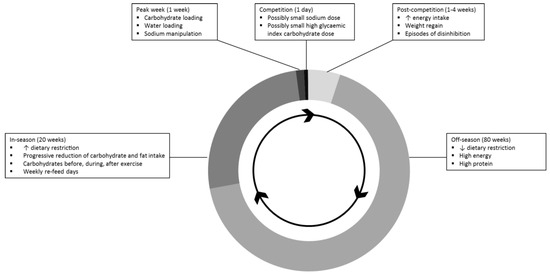