How Confident Can We Be in Modelling Female Swimming Performance in Adolescence?

All procedures used in the study were approved by the Institutional Review Board of Kanton St. Gallen, Switzerland, with a waiver of the requirement for informed consent of the participants given the fact that the study involved the analysis of publicly available data.

All data for this study were obtained from www.swimrankings.net. This web page records all swimming race results according to events such as World Championships and Olympic Games. During data sampling and preparation for analysis, we found that data before 1992 were not complete for all strokes and distances, and we therefore started data analysis from the year 1992 onward. Full data were available going back to 1992 for 202 female and 210 male champions (i.e., 412 swimmers in total), 250 in the World Championships and 162 in the Olympic Games. Prior to 2001, the 1500 m freestyle was not raced by women in the World Championships. Therefore, we have a difference of two swimmers in the number of female and male athletes. In the Olympic Games, there was a difference of six swimmers in the number of athletes between both sexes due to the missing races in the 1500 m freestyle during the whole period. All race distances which are held both in the World Championships (1994–2013) and the Olympic Games (1992–2012) were included. We excluded the 50 m breaststroke, the 50 m backstroke, and the 50 m butterfly, which were only held in the World Championships. Therefore, the following race distances were included and analysed: freestyle (50 m, 100 m, 200 m, 400 m, 800 m, and 1500 m), breaststroke (100 m, 200 m), backstroke (100 m, 200 m), butterfly (100 m, 200 m), and individual medley (200 m, 400 m). We analyzed all listed strokes and distances in both sexes and both in the World Championships and the Olympic Games for changes in the age and swimming performance of all champions over the years. Race times were converted to swimming speed using the following equation: (swimming speed (m·s−1)) = (race distance (m))/(race time (s)). The age of the athletes was calculated from the date of birth given at the web page from www.swimrankings.net.

Descriptive values were computed as mean ± standard deviation (SD) for continuous variables. Normal distribution was tested using a D’Agostino and Pearson omnibus normality test and homogeneity of variances was tested using a Levene’s test. A MultiLayer Perceptron (MLP), which is a feed-forward Artificial Neural Network (ANN), with the hyperbolic tangent as activation function in the input/hidden layers, and the softmax activation function in the output layer and cross-entropy as error function, was used to assess the impact of each co-variable on the swimming performance, using speed as outcome, correcting for multiple participations of some athletes to the finals at World Championships or Olympic Games. Generalized mixed models with repeated measures, thereby correcting for multiple participations, were used to analyze the data and investigate a potential impact of changes in age on swimming performance. An initial mixed model was carried out, using speed as dependent variable and age, sex, country, contest (i.e., World Championships versus Olympic Games), type of swimming strokes (i.e., freestyle, breaststroke, backstroke, butterfly, and individual medley) and calendar year as independent variables.
Then, single and multi-level regression analyses were carried out for each co-variable, correcting for age of athletes in order to prevent a misinterpretation of the “age-effect” as a “time-effect” and to avoid the impact of a cluster-effect on the results regarding the analysis of age of peak swimming performance and swimming performance. To investigate whether the trend in swimming performance over time was linear or non-linear (i.e., polynomial), we additionally calculated the non-linear regression model that fits the data best. The result of the linear regression analysis was compared to the best-fit result of the non-linear analysis using Akaike’s Information Criteria (AIC) and an F-test to show which model would be the most appropriate to explain the trend of the data.
Statistical analyses were performed using IBM SPSS Statistics (Version 22, IBM SPSS, Chicago, IL, USA) and GraphPad Prism (Version 6.01, GraphPad Software, La Jolla, CA, USA). Significance was accepted at p < 0.05 (two-sided for t-tests).

MLP model proved to be a good-quality model (Figure 1). Age came out as the second variable in terms of normalized importance in predicting speed as outcome.

3.2. Impact of Predictor Variables on Speed

Initially, a mixed model was performed, using speed as dependent variable and all the different co-variables as independent variables, namely, sex, age, country, contest (i.e., World Championship versus Olympic Games), type of stroke (i.e., freestyle, breaststroke, backstroke, butterfly, and individual medley) and calendar year. Speed depended on all these variables but the contest (p = 0.211, not statistically significant) (Table 1, Table 2 and Table 3). However, in this study, we will specifically focus on the impact of age on swimming performances, while the contribution of the other co-variables will be investigated in separated contributions, currently under preparation.

3.3. Changes in the Ages of the Champions

3.4. Changes in Swimming Performances across the Years

4.1. Unchanged Age of Peak Swimming Performance in Champions over Time

In accordance to other studies investigating the association of age and race distances [1,3,58,59,61,62], we also came to a second important finding that longer race distances were associated with younger swimmers’ age for all strokes and in both women and men. Tanaka and Seals assumed that this phenomenon was based on the different energy-producing pathways in skeletal muscle involved with diverse intensities [70].
This important finding could be explained through physiological and biological factors.
For sprint distances (e.g., 50 m freestyle), an athlete’s body uses an energy-pathway that is fast enough to deliver the required energy in a foreseeable time. That can be achieved by anaerobic metabolism [71,72]. Aerobic metabolism delivers the needed energy for endurance sports disciplines and endurance swimming distances (e.g., 1500 m freestyle) [73]. Furthermore, Larsson et al. reported that there is an increase of isometric and dynamic strength until the age of ~30 years [74]. An improvement in swimming performance until the age of ~30 years can be assumed for sprint distances. For endurance distances, a decrease in metabolic rates, longer response times, poorer coordination and a reduced maximum oxygen uptake (VO2 max) after the age of ~20 might explain the younger swimmers’ age [75,76,77].

A third important finding was that female champions were younger than male champions with a difference of ~2 years. That is in line with other studies reporting a sex difference of ~2 years. Schulz and Curnow examined Olympic champions from 1896 to 1980 [1]. They reported a constant sex difference in the age of peak swimming performance of ~2 years. Different reasons have been assumed to explain that sex difference. König et al. pointed to the different maturation processes during puberty [3]. Most important parameter in this context is body height [2], growth velocity that was not reached until the age of ~12 years in girls and ~14 years in boys [78], the different onset of puberty at ~11 years in girls and ~13 years, expressed as the skeletal/biological age [79], different bone growth (i.e., metacarpal thickness, width, length and medullary diameter) between girls and boys.

4.4. Increase of Peak Swimming Performance across the Years

4.5. Strengths and Limitations of this Study and Implications for Future Research

A strength of the present study is first that all distances and all strokes of freestyle, breaststroke, backstroke, butterfly and individual medley were included. Second, the topic from this study is up to date and interesting for today’s world class swimmers. Nevertheless, the present study is limited in terms of missing variables such as anthropometric [2,84,85,86], biological [1,74,75,76], and physiological factors [67,70,83,84,87,88]. For calculating the age of champions at the particular event, the year of birth and the exact date of event were considered. It was not possible to find all the exact dates of birth for each swimmer. The website from where the data analyzed in the present study were retrieved [89] provides only the year of birth of the athletes, but the exact date of events. Thus, we accepted this lack of precision on the assumption that the differences will compensate one another by a normal distribution. Consequently further research is needed on the age of peak swimming performance, its change over the years, and its comportment in different strokes and race distances as in the present study, in recent years and also at the international level. A further limitation is that we did not consider whether or not athletes were wearing non-textile suits/full-body suits during this period [90], a factor that might influence race time through its effect on passive drag [81,91]. Furthermore, beginning with the season 2013–2014, the Fédération Internationale de Natation (FINA) changed the rules for breaststroke swimming and, therefore, the new rule changes are likely to see faster swims [92].

In swimming, longer race distances were completed at younger ages than shorter race distances. The opposite is true for running where older athletes were faster in longer races [93]. The knowledge about the changes in the age of champions over time could be of great interest for swimmers competing at the world class level, as well as for their coaches and sports managers. 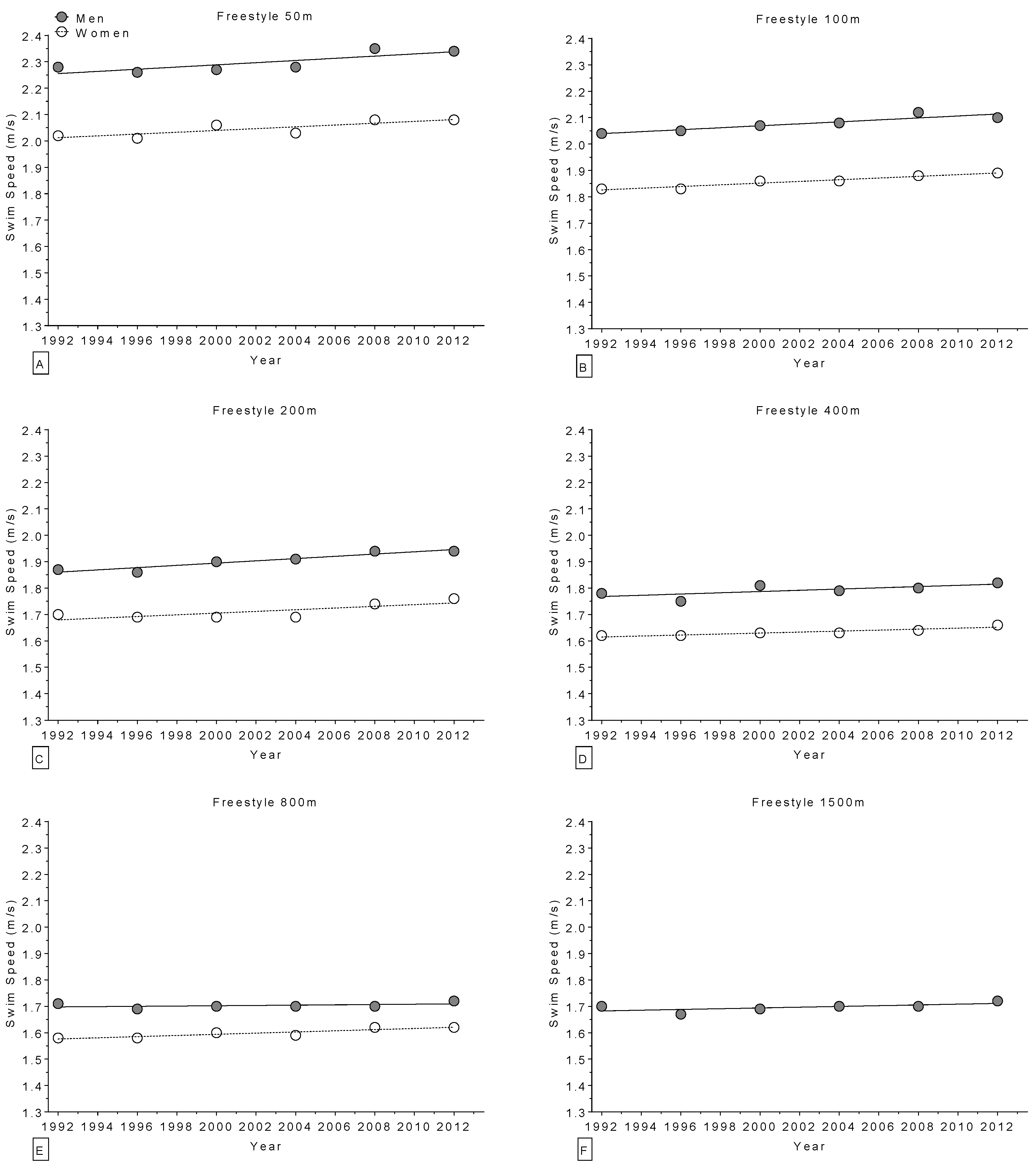 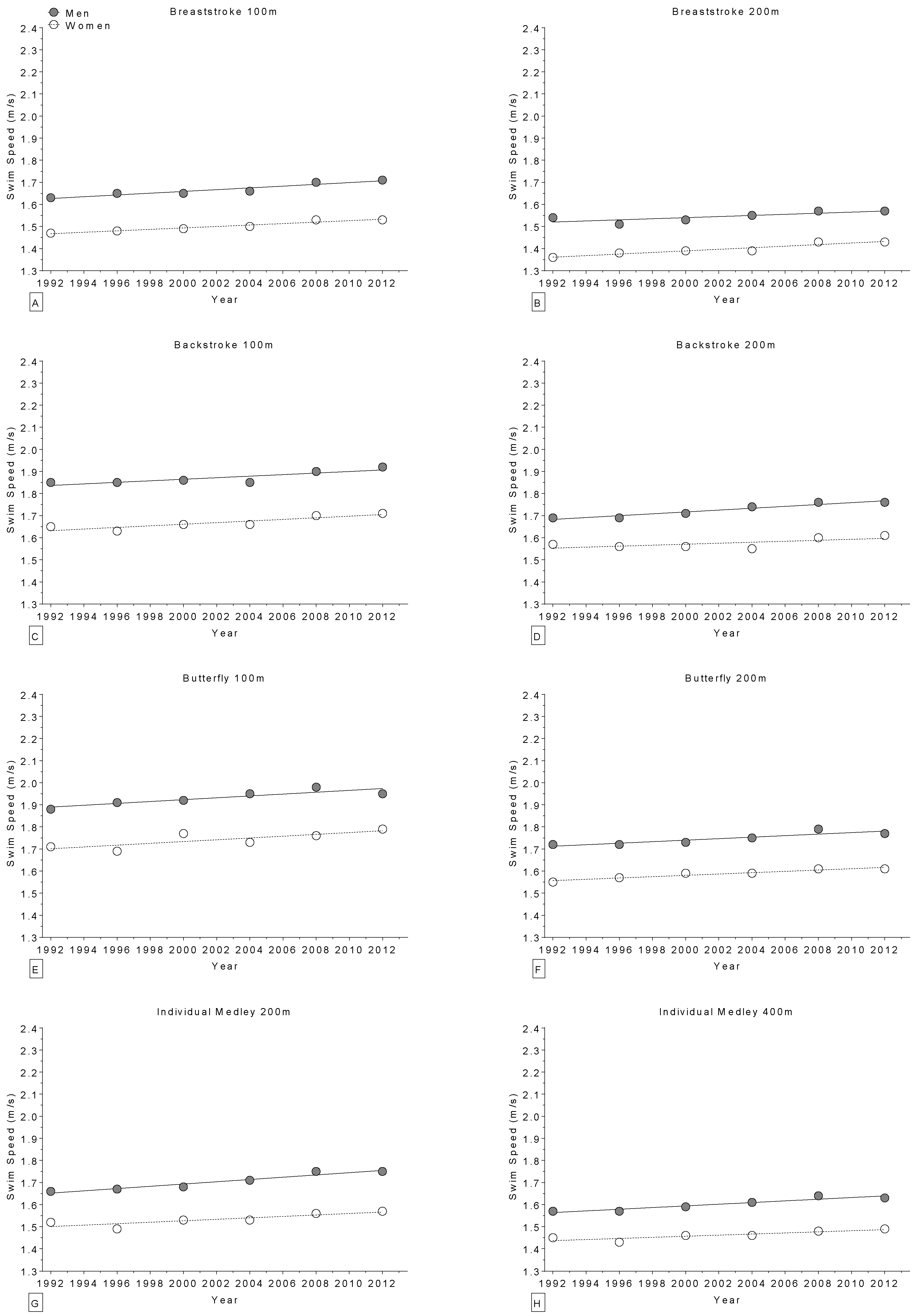