Cannibalism as a Possible Entry Route for Opportunistic Pathogenic Bacteria to Insect Hosts, Exemplified by Pseudomonas aeruginosa, a Pathogen of the Giant Mealworm Zophobas morio
Previous Article in Special Issue

The eggs laid by the collected adult mosquitoes were separately transferred to rearing basins and reared to obtain F1 progeny. Life cycle stages of eggs, fourth instar larvae, pupal exuviae, and F1 adults were examined from 10 randomly selected individuals in each rearing basin for the characteristic features to designate the specimen as sibling species A, B, C, or D. The observed morphological characters were mesothoracic seta 4 of larvae, seta 7-I of pupal exuviae, and proportions of apical pale and pre-apical dark bands in palpi of adults. The randomly collected larvae, pupae, and adults from the wild were examined for the morphological variations specified by Suguna et al. [6]. Individual eggs were separated into rearing basins and examined for the respective features in larvae, pupae, and adult stages.

The sequences were assembled using the program DNA Baser v3.5.3 and were blasted over the NCBI GenBank to confirm the mosquito origin of the sequences. Open reading frames were found for the white gene and mitochondrial gene coding sequences and confirmed for the absence of stop codons. Sequences of each genomic region were aligned using ClustalW multiple alignment to observe the sequence polymorphism. Haplotype frequency was analyzed using DNASP 5.10.01 software. All the sequences were deposited in the NCBI GenBank.

From the 98 individual eggs observed until emerging adults, only 8 individuals (10.67%) were consistent in the sibling status in consecutive larvae, pupae, and emerged adult stages. A percentage of 89.33% progeny showed different sibling characteristics in each life cycle stage. In the larvae and pupal exuviae, the occurrence of two different sibling features on the left and right sides of the body amounted to 33.33% and 26.66%, respectively (Table 6).

3.4. DNA Polymorphism of the An. subpictus Population in Sri Lanka

Two length variations of the ITS2 region, 480 bp and 575 bp, were identified among 29 sequences. All shorter sequences (n = 15) were identical, while the longer sequences (n = 14) were polymorphic in nine positions. All sequences were identified as having three haplotypes, in which the longer sequences encompassed two haplotypes.
All other analyzed nuclear DNA regions (D3 and white gene) and mitochondrial DNA regions (COI, Cyt-b) also showed two types of nucleotide sequences for all observed morphological forms. The variations were independent from the type of morphological characteristics. Further, the same sequences that shared the shorter ITS2 sequence had identical D3, white gene, COI, and Cyt-b sequences. Similarly, the individuals that shared the longer ITS2 sequence were in congruence with the sequence similarity in all other analyzed regions. The number of haplotypes of each genomic region and the NCBI accession numbers of the sequences are shown in Table 7.

The results suggest that the An. subpictus sibling species [6] are distributed in five study locations, which are dry (Puttalam, Batticaloa) and intermediate (Chilaw, Kurunegala, Monaragala) climatic zones in Sri Lanka. The initial screening of wild-caught adult mosquitoes from the five selected locations for their morphological characteristics to determine sibling species status shows that the distribution of morphological variations is independent of the study locations. Morphological variations previously designated in the An. subpictus sibling species [13,14,15] and additional variations observed in the current study were commonly found from all locations. Hence, further analysis was carried out by treating the samples collected from all locations as a single pooled An. subpictus population from Sri Lanka.
In the morphological examination of individuals, the egg morphology was excluded due to the time restriction until hatching. The eggs were hatching on the microscopic slide, prior to completing observation of the whole egg clutch. Further, it has been shown that the eggs do not serve as a good taxonomic feature due to phenotypic plasticity [24]. Therefore, only larvae, pupal exuviae, and adult morphology were considered for further analysis.
The current study shows that morphological variations of life cycle stages previously used for sibling species characterization are unreliable and polymorphic for the population found in Sri Lanka. The percentage of variation reported from the morphological identification keys of Suguna et al. [6] was 15.87–26.10% for all life cycle stages. The extended pre-apical dark bands and the additional dark spots at the tips of palpi were first-time reports of An. subpictus variations, which have not been reported in India or in Sri Lanka. Furthermore, deviations of the features on either the left or right side of the larvae and pupal exuviae were observed in the present study. However, no such one-sided variations were seen in the palpus of adults; instead, all variations were indicated in the pair of palpi. Parental sibling species characteristics were not consistent for the respective F1 adults. Further, F1 adults from a single egg clutch gave rise to a mixture of sibling species, as well as individuals with features deviating from A–D sibling species. Therefore, these findings justify the unreliability of the An. subpictus sibling species discrimination characters [6] for the identification of the An. subpictus population found in Sri Lanka. Moreover, this study does not agree with the findings of Singh et al. (2010) [10], who stated the possibility of discriminating a species by a single identification character in randomly picked individuals in a population of any life stage.
In the genomic region analysis, using nuclear and mitochondrial DNA regions, two types of sequences were reported for all analyzed DNA regions. A remarkable length variation (90 bp) was observed in the ITS2 region after annotation of the sequence using the ITS2 database. The occurrence of two types of sequences was independent from the morphological variations at any life cycle stage. This finding further confirms the unsuitability of existing morphological characterization methods [6] to discriminate the An. subpictus species complex found in Sri Lanka. Further, the haplotype analysis showed that the shorter and longer sequence forms of the ITS2 region are two distinct sequences which were similarly separated in all studied genomic regions.
Although India is closely related and shares a biodiversity in Western Ghats that is similar to Sri Lanka, there may have been independent and distinct evolutionary forces after the main land separation during the marine introgression in the Pleistocene period. Therefore, despite the close proximity of Sri Lanka and India, the evolutionary roots and relationships of Sri Lanka to other surrounding land masses—Madagascar, Africa, Australia, and the islands of Andaman—have to be considered. In the cases of the major malaria vector of Sri Lanka, the An. culicifacies species complex [25], and the major vector of leishmaniasis, the Ph. argentipus species complex [26,27], the initial reports on the similarity of their composition to Indian species were later shown to have variations and deviations. Therefore, it is essential to consider the taxonomy and evolutionary studies for such species found in Sri Lanka without considering India as a basis. Unbiased analysis of species in Sri Lanka may reveal more biologically and evolutionarily important information on species. Further, the evolutionary patterns exerted on the two countries may have variations based on the different geographic and environmental influences. Since the geography and topology of the two land masses are different, it can be concluded that the two countries have different independent evolutionary processes for these mosquito species.
Finally, although the variations in vectorial capacity have been reported for the sibling species of the major vector species An. culicifacies, such variations could not be observed among the sibling species of the secondary or minor vector species of malaria. Therefore, sibling species status and the relationship of morphological variations to sibling status of An. subpictus should be reassessed to delineate the composition and the diversity of the An. subpictus species complex found in Sri Lanka.

This research was funded by National Research Council grant number [09-21] and University of Sri Jayewardenepura (ASP/06/RE/SCI/2010/09). 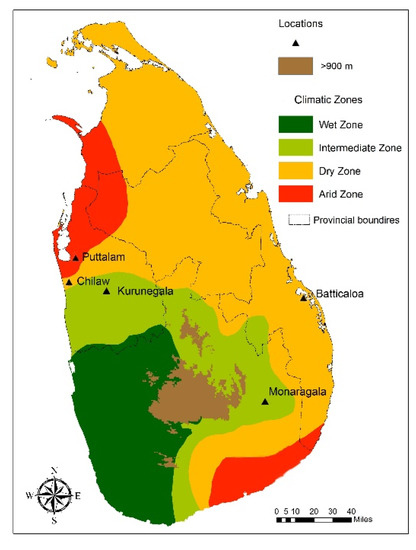