Comparison of RNAi Sequences in Insect-Resistant Plants to Expressed Sequences of a Beneficial Lady Beetle: A Closer Look at Off-Target Considerations
Next Article in Special Issue

Isolating Spermathecae and Determining Mating Status of Drosophila suzukii: A Protocol for Tissue Dissection and Its Applications
Previous Article in Journal

Flight Synchrony among the Major Moth Pests of Cranberries in the Upper Midwest, USA
Previous Article in Special Issue

Whiteflies, Bemisia tabaci (Gennadius) are major insect pests that affect many crops such as cassava, tomato, beans, cotton, cucurbits, potato, sweet potato, and ornamental crops. Bemisia tabaci transmits viral diseases, namely cassava mosaic and cassava brown streak diseases, which are the main constraints to cassava production, causing huge losses to many small-scale farmers. The aim of this work was to determine the phylogenetic relationships among Bemisia tabaci species in major cassava growing areas of Kenya. Surveys were carried out between 2013 and 2015 in major cassava growing areas (Western, Nyanza, Eastern, and Coast regions), for cassava mosaic disease (CMD) and cassava brown streak disease (CBSD). Mitochondrial cytochrome oxidase I (mtCOI-DNA) was used to determine the genetic diversity of B. tabaci. Phylogenetic trees were constructed using Bayesian methods to understand the genetic diversity across the study regions. Phylogenetic analysis revealed two B. tabaci species present in Kenya, sub-Saharan Africa 1 and 2 comprising five distinct clades (A–E) with percent sequence similarity ranging from 97.7 % to 99.5%. Clades B, C, D, and E are predominantly distributed in the Western and Nyanza regions of Kenya whereas clade B is dominantly found along the coast, the eastern region, and parts of Nyanza. Our B. tabaci clade A groups with sub-Saharan Africa 2-(SSA2) recorded a percent sequence similarity of 99.5%. In this study, we also report the identification of SSA2 after a 15 year absence in Kenya. The SSA2 species associated with CMD has been found in the Western region of Kenya bordering Uganda. More information is needed to determine if these species are differentially involved in the epidemiology of the cassava viruses. View Full-Text
Keywords: Bemisia tabaci; genetic diversity; mtCOI; cassava; Kenya; cassava brown streak disease (CBSD); cassava mosaic disease (CMD) Bemisia tabaci; genetic diversity; mtCOI; cassava; Kenya; cassava brown streak disease (CBSD); cassava mosaic disease (CMD)
►▼ Show Figures 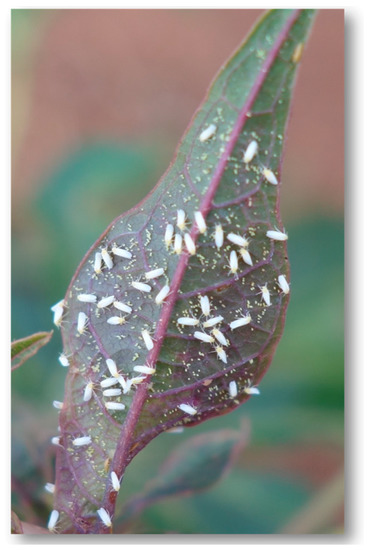