Crapemyrtle Bark Scale: A New Threat for Crapemyrtles, a Popular Landscape Plant in the U.S.

In 2014, Guangzhou City, South China, suffered from its worst outbreak of dengue fever in decades. Larval mosquito habitat surveillance was carried out by using android mobile devices in four study sites in May 2015. The habitats with larval mosquitoes were recorded as photo waypoints in OruxMaps or in videos. The total number of potential mosquito habitats was 342, of which 166 (49%) were found to have mosquito larvae or pupae. Small containers were the most abundant potential habitats, accounting for 26% of the total number. More mosquito larvae and pupae, were found in small containers than in other objects holding water, for example, potted or hydroponic plants (p < 0.05). Mosquito larvae were collected from all plastic road barriers, used tires, and underground water. Aedes albopictus larvae were found from small and large containers, stumps, among others. The overall route index (RI) was 11.3, which was 14.2 times higher than the grade C criteria of the National Patriotic Health Campaign Committee (NPHCC), China. The higher RIs were found from the bird and flower markets, schools, and underground parking lots. The results indicated that Android mobile devices are a convenient and useful tool for surveillance of mosquito habitats, and the enhancement of source reduction may benefit the prevention and control of dengue vector mosquitoes. View Full-Text
Keywords: mosquito habitat; Aedes albopictus; mosquito surveillance; android mobile device; OruxMaps mosquito habitat; Aedes albopictus; mosquito surveillance; android mobile device; OruxMaps
►▼ Show Figures 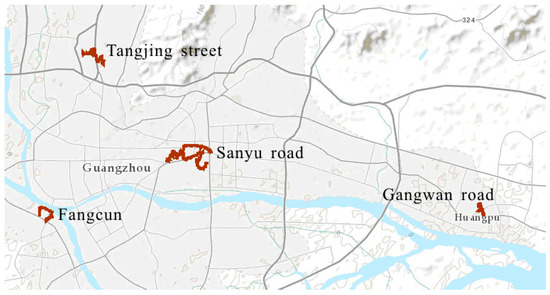