Drosophila suzukii populations remain low in the UK. To date, there have been no reports of widespread damage. Previous research demonstrated that various species of entomopathogenic fungi and nematodes could potentially suppress D. suzukii population development under laboratory trials. However, none of the given species was concluded to be specifically efficient in suppressing D. suzukii. Therefore, there is a need to screen further species to determine their efficacy. The following entomopathogenic agents were evaluated for their potential to act as control agents for D. suzukii: Metarhizium anisopliae; Isaria fumosorosea; a non-commercial coded fungal product (Coded B); Steinernema feltiae, S. carpocapsae, S. kraussei and Heterorhabditis bacteriophora. The fungi were screened for efficacy against the fly on fruit while the nematodes were evaluated for the potential to be applied as soil drenches targeting larvae and pupal life-stages. All three fungi species screened reduced D. suzukii populations developing from infested berries. Isaria fumosorosea significantly (p < 0.001) reduced population development of D. suzukii from infested berries. All nematodes significantly reduced adult emergence from pupal cases compared to the water control. Larvae proved more susceptible to nematode infection. Heterorhabditis bacteriophora proved the best from the four nematodes investigated; readily emerging from punctured larvae and causing 95% mortality. The potential of the entomopathogens to suppress D. suzukii populations is discussed. View Full-Text
Keywords: Drosophila suzukii; biocontrol; entomopathogenic nematodes; fungi; integrated pest management Drosophila suzukii; biocontrol; entomopathogenic nematodes; fungi; integrated pest management
►▼ Show Figures 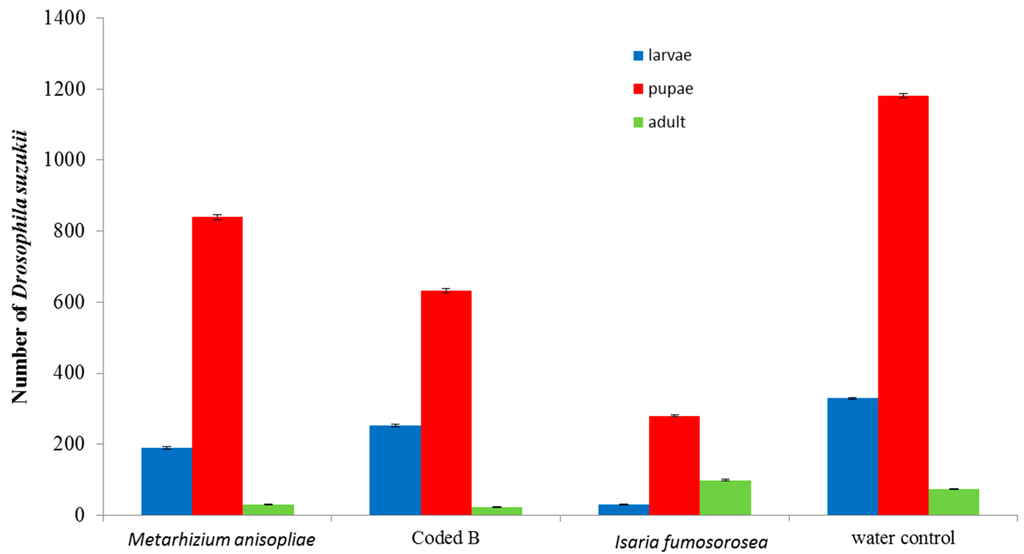