The Squash bug, Anasa tristis (De Geer), is a major piercing/sucking pest of cucurbits, causing extensive damage to plants and fruits, and transmitting phytopathogens. No genomic resources to facilitate field and laboratory studies of this pest were available; therefore the first de novo exome for this destructive pest was assembled. RNA was extracted from insects challenged with bacterial and fungal immunoelicitors, insects fed on different cucurbit species, and insects from all life stages from egg to adult. All treatments and replicates were separately barcoded for subsequent analyses, then pooled for sequencing in a single lane using the Illumina HiSeq2000 platform. Over 211 million 100-base tags generated in this manner were trimmed, filtered, and cleaned, then assembled into a de novo reference transcriptome using the Broad Institute Trinity assembly algorithm. The assembly was annotated using NCBIx NR, BLAST2GO, KEGG and other databases. Of the >130,000 total assemblies 37,327 were annotated identifying the sequences of candidate gene silencing targets from immune, endocrine, reproductive, cuticle, and other physiological systems. Expression profiling of the adult immune response was accomplished by aligning the 100-base tags from each biological replicate from each treatment and controls to the annotated reference assembly of the A. tristis transcriptome. View Full-Text
Keywords: squash bug; cucurbits; expression profiling; RNA-seq; entomopathogen response; PAMPs; PRRs; anacin squash bug; cucurbits; expression profiling; RNA-seq; entomopathogen response; PAMPs; PRRs; anacin
►▼ Show Figures 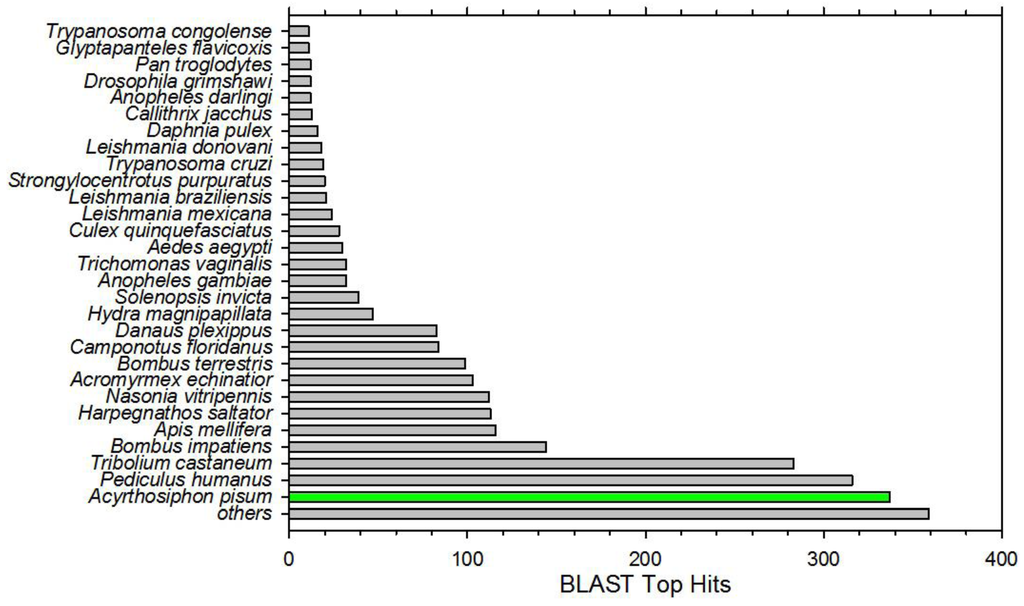