Occurrence and Prevalence of Insect Pathogens in Populations of the Codling Moth, Cydia pomonella L.: A Long-Term Diagnostic Survey
Previous Article in Journal

A Third Way for Entomophthoralean Fungi to Survive the Winter: Slow Disease Transmission between Individuals of the Hibernating Host

Insects as a Nitrogen Source for Plants

Many plants have evolved adaptations in order to survive in low nitrogen environments. One of the best-known adaptations is that of plant symbiosis with nitrogen-fixing bacteria; this is the major route by which nitrogen is incorporated into plant biomass. A portion of this plant-associated nitrogen is then lost to insects through herbivory, and insects represent a nitrogen reservoir that is generally overlooked in nitrogen cycles. In this review we show three specialized plant adaptations that allow for the recovery of insect nitrogen; that is, plants gaining nitrogen from insects. First, we show specialized adaptations by carnivorous plants in low nitrogen habitats. Insect carnivorous plants such as pitcher plants and sundews (Nepenthaceae/Sarraceniaceae and Drosera respectively) are able to obtain substantial amounts of nitrogen from the insects that they capture. Secondly, numerous plants form associations with mycorrhizal fungi that can provide soluble nitrogen from the soil, some of which may be insect-derived nitrogen, obtained from decaying insects or insect frass. Finally, a specialized group of endophytic, insect-pathogenic fungi (EIPF) provide host plants with insect-derived nitrogen. These soil-inhabiting fungi form a remarkable symbiosis with certain plant species. They can infect a wide range of insect hosts and also form endophytic associations in which they transfer insect-derived nitrogen to the plant. Root colonizing fungi are found in disparate fungal phylogenetic lineages, indicating possible convergent evolutionary strategies between taxa, evolution potentially driven by access to carbon-containing root exudates. View Full-Text
Keywords: insects; nitrogen; nutrient transfer; fungus; endophyte; insect pathogen insects; nitrogen; nutrient transfer; fungus; endophyte; insect pathogen
►▼ Show Figures 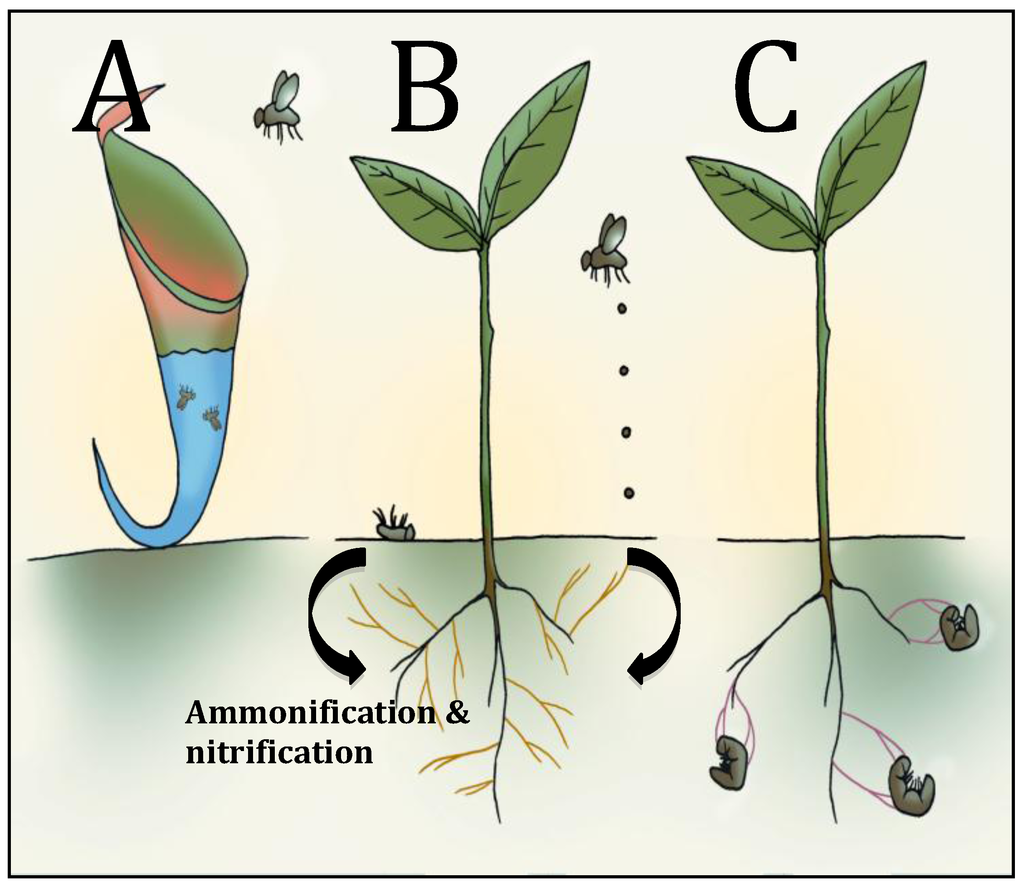