Hirsutellin A: A Paradigmatic Example of the Insecticidal Function of Fungal Ribotoxins

Action on the Surface: Entomopathogenic Fungi versus the Insect Cuticle

Infections mediated by broad host range entomopathogenic fungi represent seminal observations that led to one of the first germ theories of disease and are a classic example of a co-evolutionary arms race between a pathogen and target hosts. These fungi are able to parasitize susceptible hosts via direct penetration of the cuticle with the initial and potentially determining interaction occurring between the fungal spore and the insect epicuticle. Entomogenous fungi have evolved mechanisms for adhesion and recognition of host surface cues that help direct an adaptive response that includes the production of: (a) hydrolytic, assimilatory, and/or detoxifying enzymes including lipase/esterases, catalases, cytochrome P450s, proteases, and chitinases; (b) specialized infectious structures, e.g., appressoria or penetrant tubes; and (c) secondary and other metabolites that facilitate infection. Aside from immune responses, insects have evolved a number of mechanisms to keep pathogens at bay that include: (a) the production of (epi) cuticular antimicrobial lipids, proteins, and metabolites; (b) shedding of the cuticle during development; and (c) behavioral-environmental adaptations such as induced fever, burrowing, and grooming, as well as potentially enlisting the help of other microbes, all intended to stop the pathogen before it can breach the cuticle. Virulence and host-defense can be considered to be under constant reciprocal selective pressure, and the action on the surface likely contributes to phenomena such as strain variation, host range, and the increased virulence often noted once a (low) virulent strain is “passaged” through an insect host. Since the cuticle represents the first point of contact and barrier between the fungus and the insect, the “action on the surface” may represent the defining interactions that ultimately can lead either to successful mycosis by the pathogen or successful defense by the host. Knowledge concerning the molecular mechanisms underlying this interaction can shed light on the ecology and evolution of virulence and can be used for rational design strategies at increasing the effectiveness of entomopathogenic fungi for pest control in field applications. View Full-Text
Keywords: insect epicuticle; entomopathogenic fungi; virulence; host defense; co‑evolution insect epicuticle; entomopathogenic fungi; virulence; host defense; co‑evolution
►▼ Show Figures 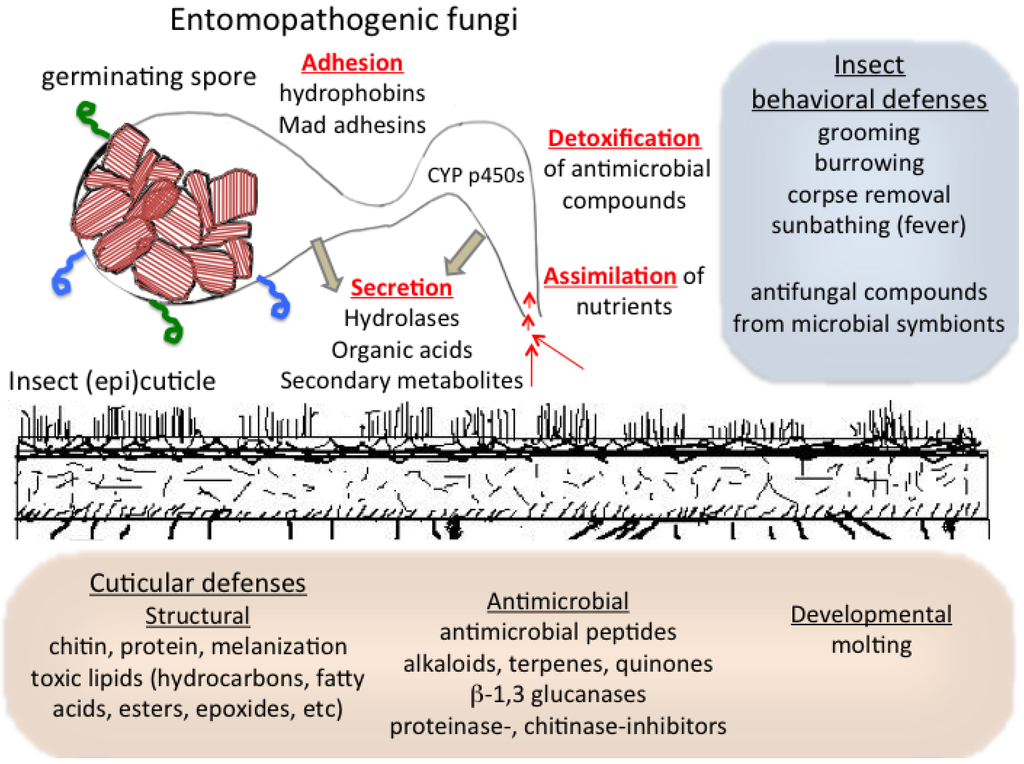