Persistence of the Gypsy Moth Pheromone, Disparlure, in the Environment in Various Climates
Previous Article in Journal / Special Issue

The Effects of Pesticides on Queen Rearing and Virus Titers in Honey Bees (Apis mellifera L.)

RNA interference has been frequently applied to modulate gene function in organisms where the production and maintenance of mutants is challenging, as in our model of study, the honey bee, Apis mellifera. A green fluorescent protein (GFP)-derived double-stranded RNA (dsRNA-GFP) is currently commonly used as control in honey bee RNAi experiments, since its gene does not exist in the A. mellifera genome. Although dsRNA-GFP is not expected to trigger RNAi responses in treated bees, undesirable effects on gene expression, pigmentation or developmental timing are often observed. Here, we performed three independent experiments using microarrays to examine the effect of dsRNA-GFP treatment (introduced by feeding) on global gene expression patterns in developing worker bees. Our data revealed that the expression of nearly 1,400 genes was altered in response to dsRNA-GFP, representing around 10% of known honey bee genes. Expression changes appear to be the result of both direct off-target effects and indirect downstream secondary effects; indeed, there were several instances of sequence similarity between putative siRNAs generated from the dsRNA-GFP construct and genes whose expression levels were altered. In general, the affected genes are involved in important developmental and metabolic processes associated with RNA processing and transport, hormone metabolism, immunity, response to external stimulus and to stress. These results suggest that multiple dsRNA controls should be employed in RNAi studies in honey bees. Furthermore, any RNAi studies involving these genes affected by dsRNA-GFP in our studies should use a different dsRNA control.
Keywords: RNAi; dsRNA; GFP; honeybee; Apis mellifera; off-target effects RNAi; dsRNA; GFP; honeybee; Apis mellifera; off-target effects

RNA interference (RNAi) technologies (RNAi) are important tools for manipulating transcript levels and exploring gene function in a wide range of species. RNAi is a particularly critical tool for functional genomic studies in species where other genetic manipulations, such as the development of transgenics or mutant strains, are not feasible [1]. Honey bees (Apis mellifera), for example, are an excellent model system for sophisticated studies of cognition, neurobiology, plasticity and complex social behavior, but thus far, the development and maintenance of knockout and transgenic lineages in this species have not been possible [2]. Over the last decade, RNAi has been successfully adopted as the major genetic tool for gene function analysis in honey bees [3,4,5]. However, there can be considerable variability in the levels and duration of transcript knockdowns between tissues, individuals and experiments. In order to take full advantage of this powerful technology to study gene function in honey bees and other insects, it is necessary to develop a complete understanding of the mechanisms by which RNAi decreases transcript abundance and, in particular, to examine and characterize any off-target effects.
Off-target effects are non-specific and caused by undesired base-pairing of non-target genes with small interfering RNA (siRNA) derived from double-stranded RNA (dsRNA) [6]. Off-target effects can be widespread and can alter expression of large numbers of genes, as previously reported in RNAi experiments involving plants, invertebrates, vertebrates [7,8,9], as well as honey bees [10].
A green fluorescent protein (GFP)-derived dsRNA (dsRNA-GFP) has been used as an exogenous control for RNAi assays in several arthropod species, including Marsupenaeus japonicus [11], Pacifastacus leniusculus [12], Spodoptera exigua [13,14], Acyrthosiphon pisum [15], Aedes aegypti [16], Antheraea sp. [17], Locusta migratoria [18], Schistocerca gregaria [19], Bactericerca cockerelli [20] and Apis mellifera [5,21,22,23,24,25,26,27]. Its gene sequence is not found in the honey bee genome. Although dsRNA-GFP is not expected to trigger an RNAi response in treated bees, undesirable effects on gene expression, pupal pigmentation or developmental timing have been routinely observed. To better understand the molecular and phenotypic effects of dsRNA-GFP in honey bees and to evaluate its use as a control for RNAi studies, we examined the impact of dsRNA-GFP on global gene expression patterns in developing workers. The dsRNA-GFP was introduced using a non-invasive feeding protocol [23]. We found that dsRNA-GFP causes large-scale changes in gene expression associated with multiple biological processes. Furthermore, dsRNA-GFP exposure tended to preferentially decrease, rather than increase, expression of genes compared to controls.

The double-stranded RNA for green fluorescent protein (dsRNA-GFP) is widely used as an exogenous control in honey bee RNAi studies [5,21,22,23,24,25,26,27]. In our studies, changes in gene expression, pupal pigmentation or developmental timing are the most frequent undesired effects in RNAi screens that use dsRNA-GFP as control. These effects have been also noted by other bee researchers during discussions related to RNAi approaches at the IUSSI Congress 2010 (Copenhagen, Denmark) and Workshop on Honey Bee Genomics & Biology 2011 (Cold Spring Harbor, USA). Therefore, those observable side effects are recurring and not yet reported in the literature. Based on this, we decided to perform a large-scale gene expression analysis to compare untreated and dsRNA-GFP treated developing workers.
Three technically distinct experiments were conducted in two different laboratories. Similar numbers of up- and downregulated genes were found for experiments 1 and 2. In addition, results from both experiments showed a greater number of down- than upregulated genes (Table 1). On the other hand, expression of only a few genes was altered by dsRNA-GFP in experiment 3, which examined adult workers. 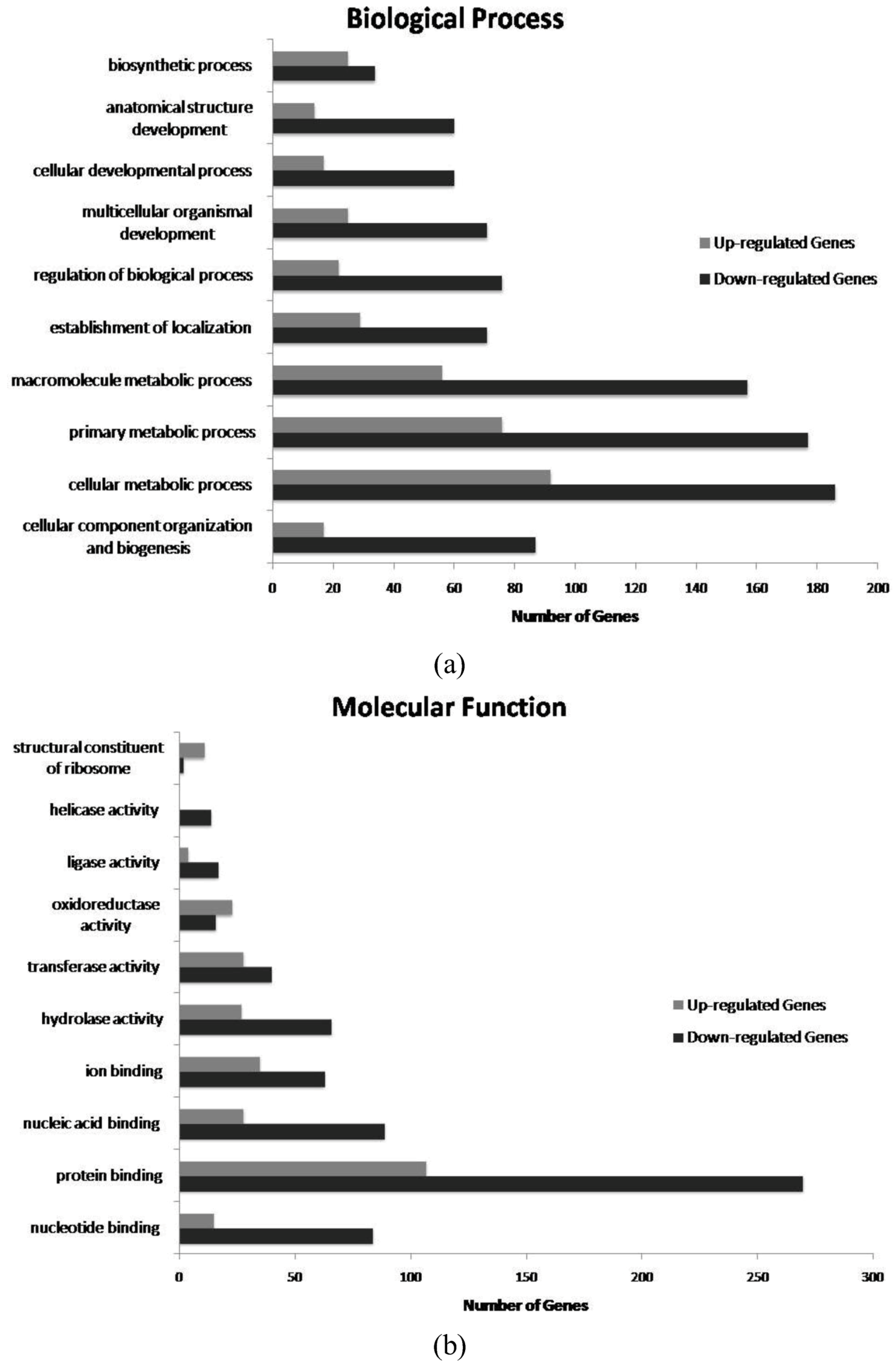 Three independent experiments were performed. For experiment 1, we used Apis mellifera carnica workers maintained according to standard commercial practices at the Chemical Ecology Lab Apiary (Penn State University, State College, PA, USA), while Africanized A. mellifera workers from the Apiary of the Department of Genetics (University of Sao Paulo, Ribeirao Preto, SP, Brazil) were used for experiments 2 and 3. In order to obtain age-controlled bees, the queen was caged on a comb and left to lay eggs for 6 h in all experiments. Twenty hours after larval hatching, combs containing second instar larvae were retrieved from the colonies for treatments (see section 3.3. RNAi treatments, sampling and RNA isolation).

Because handling and injections may cause stress and affect physiology and survival, we decided to use a non-invasive RNAi protocol described by [23]. In brief, second instar larvae received a single 1 μL dose of a solution containing 5.0 μg (experiment 1) or 0.5 μg (experiments 2 and 3) of dsRNA-GFP, carefully mixed with their natural diet. After treatment, combs were returned to their original colony to develop under natural conditions until the desired stages for analysis: pre-pupae (PP) and light-brown-eyed pupae (Pbl) were sampled for experiment 1, fifth instar spinning phase larvae (L5S2) were sampled for experiment 2 and seven day-old workers (W7d) were sampled for experiment 3. For experiment 3, in particular, newly-emerged workers were maintained in an incubator at 34 °C and a relative humidity of 80% and were provided with water, pollen and sucrose syrup for seven days (W7d). All samples were staged according to criteria developed by [56]. As control groups, age-controlled larvae were left to develop without any treatment (non-treated) and also sampled at L5S2, PP, Pbl and W7d, depending on the experiment. For experiment 1, a total of 16 individuals were collected: four non-treated with PP, four treated with PP, four non-treated with Pbl and four treated with Pbl. For experiment 2, a total of 10 individuals were collected: five non-treated with L5S2 and five treated with L5S2. For experiment 3, a total of 10 individuals were collected: five non-treated with W7d and five treated with W7d. For experiments 1 and 2, each whole-body sample was homogenized in a 1.5 mL tube containing 1 mL of TRIzol (Invitrogen), while experiment 3 used abdomen with adhering fat body and epidermal tissues, which was similarly homogenized as above. All samples were stored at −80°C until the RNA isolation step. Total RNA from each stored sample was isolated following TRIzol manufacturer’s instructions. Subsequently, a purification step was performed using an RNeasy Mini Kit (Qiagen) followed by DNase treatment using an RNase-Free DNase Set (Qiagen).

Gene expression differences were analyzed using a dye-swap design in which each sample was labeled with both Cy3 or Cy5 probes and hybridized to the honey bee whole genome oligonucleotide arrays supplied by the W. M. Keck Center for Comparative and Functional Genomics at the University of Illinois, Urbana-Champaign. For experiment 1 (which performed a loop design), a total of 200 ng of RNA of each individual (four individuals/sample group) was separately amplified using the Amino Allyl MessageAmp II aRNA Amplification Kit (Ambion, Grand Island, NY), and 5 μg was labeled with Cy3 or Cy5 dye using a Kreatech labeling kit (Kreatech Inc, Durham, NC), for a total of four replicates/sample (20 microarrays). For experiment 2, each group (non-treated or treated) was represented by pools containing 200 ng of total RNA from each individual (totaling 1 μg). One microgram of each pool was separately amplified using the Amino Allyl MessageAmp II aRNA Amplification Kit (Ambion) for which 20 μg was labeled with Amersham Cy3 or Cy5 dye (GE Healthcare Life Science, Piscataway, NJ). Thus, two sets of labeled probes were then hybridized to two arrays. Experiment 3 followed the same procedures described for experiment 2. Slides hybridization, scanning, data normalization and data analysis of experiment 1 followed procedures and steps described in [57,58], while experiments 2 and 3 followed procedures and steps described in [59,60]. The microarray data is available on the Gene Expression Omnibus database (GEO, at NCBI database), according to MIAME standards [61], under the following accession numbers: GSE43193 (experiment 1) and GSE41004 (experiments 2 and 3).

Sequences from the honey bee Official Gene Set version 1.1 [62] and genome assembly version Amel_4.0 [63] available at BeeBase [64] were used for in silico analysis. In addition, some Gene IDs correspond to Expressed Sequence Tags (ESTs) and were recovered from GenBank. Blast searches were performed using NCBI [65] or BeeBase [66] tools. Clustal W [67] was used for multiple alignments of the GFP sequences. Gene Ontology (GO) terms were recovered from Drosophila orthologs available at FlyBase [68] and GO classifications and comparisons were performed using Babelomics tool, version 3.2 [69] at level 3.

Our results demonstrate that treatment with dsRNA-GFP can have substantial direct and indirect effects on transcript levels of genes associated with a variety of biological processes in developing honey bee workers. Furthermore, it is clear that the molecular effects of dsRNA-GFP exposure can vary depending on the physiological and developmental context; thus, while our studies identified ~1400 affected transcripts, different transcripts may be impacted in different studies. We recommend the use of a second exogenous control in RNAi studies in honey bees in order to better control for the off-target effects of both the control and experimental genes. Further studies will be necessary to determine the non-sequence specific effects of dsRNA-GFP, the effects of dosages and the duration of treatment.

File S1. GFP fasta sequences used in different studies and a multiple alignment of them using Clustal W tool (http://www.genome.jp/tools/clustalw/).
File S2. BlastN alignments of dsRNA-GFP sequence with the coding region of some honey bee genes.
Table S1. Common honey bee genes perturbed in the three different experiments.
Table S2. Opposite gene expression effects triggered by dsRNA-GFP treatment in experiments 1 and 2.
Table S3. List of genes up- and downregulated in response to dsRNA-GFP treatment in all 3 experiments. Statistical significance for experiment 1 is provided at FDR>0.05 values, while the adjusted p-value>0.05 is used for experiments 2 and 3. For experiment 1, positive and negative values for fold change mean down- and upregulation by dsRNA-GFP, respectively. For experiments 2 and 3, positive and negative values for fold change mean up- and downregulation by dsRNA-GFP, respectively.
Table S4. Molecular functions and biological processes of up- and downregulated genes in response to dsRNA-GFP treatment in all 3 experiments. Classification was based on Gene Ontology terms from Drosophila orthologs. Comparisons were performed using Babelomics tool, version 3.2 (http://babelomics3.bioinfo.cipf.es) at level 3.