Nucleopolyhedroviruses (NPV: Gammabaculovirus: Baculoviridae) of diprionid sawflies (Diprionidae: Hymenoptera) are highly host specific and only infect the midgut epithelium. While still alive, infected sawfly larvae excrete NPV-laden diarrhea that contaminates food sources. The diarrhea can then be consumed by conspecific larvae, resulting in rapid horizontal transmission of the virus. To better understand the efficacy of Gammabaculovirus-based biological control products, the horizontal spread of such a virus (NeabNPV) within cohorts of balsam fir sawfly (Neodiprion abietis) larvae was studied by introducing NeabNPV-treated larvae into single-cohort groups at densities similar to those observed during the increasing (field study) and peak (laboratory study) phases of an outbreak. In field studies (~200 N. abietis larvae/m2 of balsam fir (Abies balsamea) foliage), NeabNPV-induced mortality increased positively in a density-dependent manner, from 23% (in control groups) to 51% with the addition of one first-instar NeabNPV-treated larva, to 84% with 10 first–instar-treated larvae. Mortality was 60% and 63% when one or 10 NeabNPV-treated third-instar larva(e), respectively, were introduced into groups. Slightly higher levels of NeabNPV-induced mortality occurring when NeabNPV-treated larvae were introduced into first- rather than third-instar cohorts suggests that early instars are more susceptible to the virus. In the laboratory (~1330 N. abietis larvae/ m2 of foliage), NeabNPV-caused mortality increased from 20% in control groups to over 80% with the introduction of one, five or 10 NeabNPV-treated larvae into treatment groups of first-instar larvae. View Full-Text
Keywords: Gammabaculovirus; Neodiprion abietis; nucleopolyhedrovirus; balsam fir sawfly; Abies balsamea; disease transmission; pest management Gammabaculovirus; Neodiprion abietis; nucleopolyhedrovirus; balsam fir sawfly; Abies balsamea; disease transmission; pest management
►▼ Show Figures 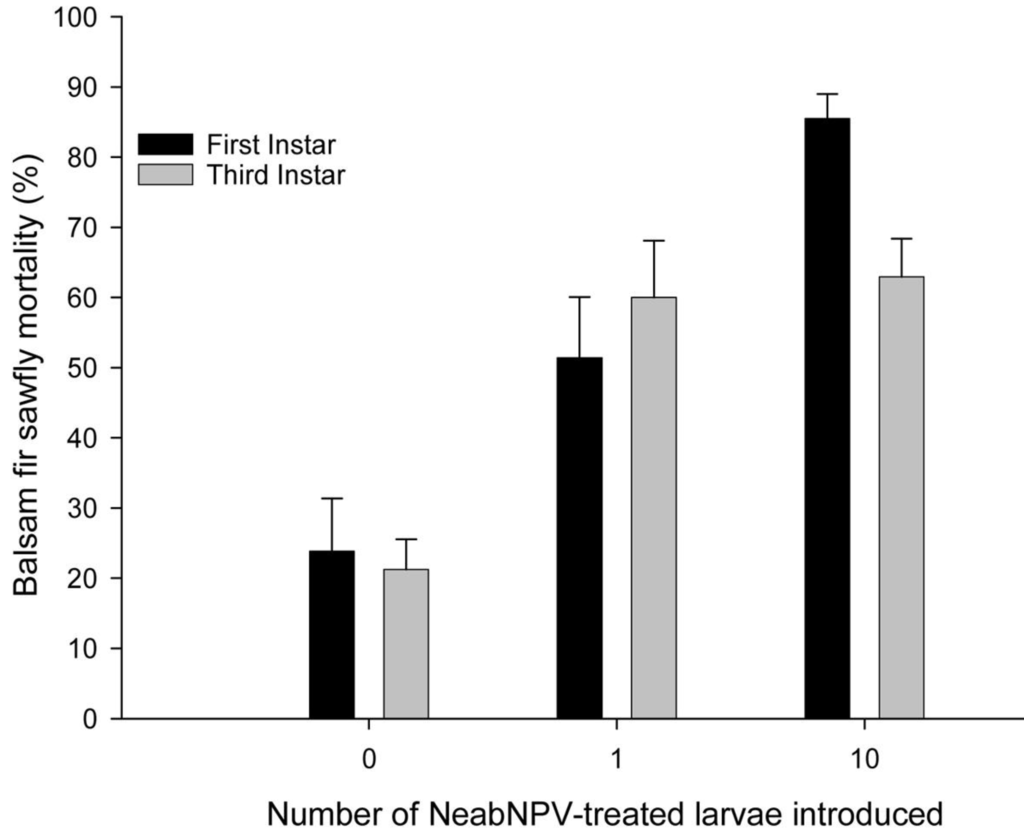