Stress Tolerance of Bed Bugs: A Review of Factors That Cause Trauma to Cimex lectularius and C. Hemipterus

Experimental life tables were constructed and analyzed for three strains of the common bed bug: a pyrethroid-susceptible laboratory strain (HS), a highly resistant field strain (RR), and a field strain with a declining level of resistance (KR). Egg to adult survival in the RR strain was 94% compared with 79% and 69% in the HS and KR strains, respectively. The RR strain also developed significantly faster from egg to adult (~35 days) than the other two strains (~40 days). Analysis of a survivorship and fecundity life table for the RR strain produced the following results. The average life expectancy for a newly laid egg was ~143 days, and that of a newly molted adult was ~127 days. Females produced an average of 0.64 daughter eggs/day with the highest weekly production during the fifth week of adult life. Analysis of daily reproductive parity showed that females produced 1–3 and 4–6 eggs on 79 and 21% of the days, respectively, when egg laying occurred. The net reproductive rate (R0) of the RR strain was ~35, which represents a 35-fold increase in the population per generation (~92 days). The intrinsic rate of increase, r, was 0.054 indicating that the population multiplies 1.1 times/female/day (λ) and doubles in size every 13 days. The stable age distribution (cx) was dominated by nymphs (54%), followed by eggs (34%) and adults (12%). Reproductive values (vx) for the strain increased from egg to the adult stage. View Full-Text
Keywords: Cimex lectularius; bed bug; life table; life history; resistance; survivorship; development; pyrethroids Cimex lectularius; bed bug; life table; life history; resistance; survivorship; development; pyrethroids
►▼ Show Figures 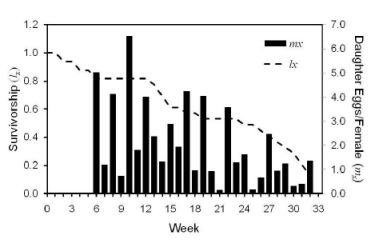