An Analysis of the Possible Migration Routes of Oedaleus decorus asiaticus Bey-Bienko (Orthoptera: Acrididae) from Mongolia to China

Airflow is very important for the long-distance migration of O. decorus asiaticus, and wind shear, in particular, is the main factor related to forced landing. Analyzing the weather records, we found that the northwest wind prevailed when the population invaded. Specifically, from July to August, a large number of emerging adults appeared in the source areas of Mongolia, and the large-scale northwest wind was the decisive condition for the successful long-distance migration of O. decorus asiaticus. The species has a strong migratory ability, flying along the airflow for several nights. If the northwest air current meets the southwest warm current going north, a large number of O. decorus asiaticus will drop due to wind shear, and then a major outbreak will occur. Analysis of the source of the insects shows that the O. decorus asiaticus break outs in China may have originated from Mongolia. They were brought into China by the southerly airflow at night, and they likely made a forced landing in Beijing due to wind shear, sinking airflow, rainfall and other reasons. In summary, through analysis of the insect’s prevalence and the meteorological conditions in Mongolia, we can provide a basis for predicting the occurrence of O. decorus asiaticus in China.

Oedaleus decorus asiaticus (Bey-Bienko) is a destructive pest in grasslands and adjacent farmland in northern China, Mongolia, and other countries in Asia. It has been supposed that this insect pest can migrate a long distance and then induce huge damages, however, the migration mechanism is still unrevealed. The current study uses insect light trap data from Yanqing (Beijing), together with regional meteorological data to determine how air flow contributes to the long-distance migration of O. decorus asiaticus. Our results indicate that sinking airflow is the main factor leading to the insects’ forced landing, and the prevailing northwest wind was associated with O. decorus asiaticus taking off in the northwest and moving southward with the airflow from July to September. Meanwhile, the insects have a strong migratory ability, flying along the airflow for several nights. Thus, when the airflow from the northwest met the northward-moving warm current from the southwest, a large number of insects were dropped due to sinking airflow, resulting in a large outbreak. Our simulations suggest that the source of the grasshoppers involved in these outbreaks during early 2000s in northern China probably is in Mongolia, and all evidence indicates that there are two important immigrant routes for O. decorus asiaticus migration from Mongolia to Beijing. These findings improves our understanding of the factors guiding O. decorus asiaticus migration, providing valuable information to reduce outbreaks in China that have origins from outside the country. View Full-Text
Keywords: grasshoppers; migration regularity; meteorology; Beijing; Mongolia; long distance flight; air current; weather model grasshoppers; migration regularity; meteorology; Beijing; Mongolia; long distance flight; air current; weather model
►▼ Show Figures 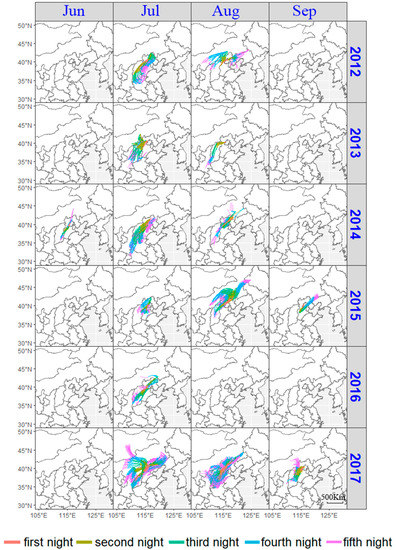