Mayflies are among the most susceptible insect groups in mountain freshwater bodies, where they are facing different environmental threats, resulting in loss of species assemblage and diversity. In this study, we described the structure of the community of mayflies in three different streams in the dry-hot valley of Baima Snow Mountain, China, and assessed the potential effect of environmental variation over this specific group of insects. The results showed clear shifts in the community structure of mayflies between the streams. From the study area, 18 taxa were identified, with Baetis sp. and Baetiella marginata being the most prevalent. Overall, the Yeri stream hosted suitable habitats for several taxa of mayflies than the other two streams, as demonstrated by the highest species richness and diversity. Moreover, there was high environmental heterogeneity between the streams, in turn influencing the species of mayflies, particularly in the Sharong stream. As expected, the results also showed that some of the environmental factors such as altitude, conductivity, total dissolved solids, water temperature, dissolved silicon, and pH explained most of the variation in species composition.

Mountain freshwater ecosystems are threatened all over the world by a range of human-induced stresses, ensuing in a rapid loss of habitats and species diversity. Many macroinvertebrates are reactive to habitat disturbance, and mayflies (Ephemeroptera) are amongst the most sensitive groups. Despite they are susceptible to environmental deviation, knowledge concerning their species richness and diversity is still unknown in remote areas. The objectives of this study were to (1) investigate the mayfly species assemblage and community composition along different mountain streams and assess potential differences, and (2) identify the environmental variation and its influence on the structure of mayfly communities within such freshwater systems. We collected biological and environmental data from 35 sites situated along elevation gradients in the Baima Snow Mountain, northwest Yunnan, China. Multivariate analyses were performed on the environmental variables and the mayfly species composition, as well as on richness and diversity indices. We found that the community composition of mayflies was different across all three watercourses. Among the 18 Ephemeroptera taxa identified, Baetis sp. and Baetiella marginata were highly dominant, accounting for over 50% of the dissimilarity of each stream. In terms of species assemblages, almost all sites in the Yeri stream hosted good-quality habitats for several mayfly species, as reflected by the highest species richness. The Benzilan stream followed, whereas the Sharong stream showed relatively low mayfly assemblage. This variation was explained by the high environmental heterogeneity between the three watercourses. In particular, the RDA model revealed that among the different environmental factors analyzed, altitude, conductivity, total dissolved solids, water temperature, dissolved silicon, and pH explained most of the variation in species composition. Moreover, the altitude alone explained 17.74% of the variation, and in-depth analysis confirmed its significant effect on diversity indices. Further research should focus on evaluating the scale of threats to this important group of insects in the mountain freshwater ecosystem, particularly the impact of human-induced disturbances such as land use/landcover alterations. View Full-Text
Keywords: high mountains; freshwater biodiversity; environmental heterogeneity; dry-hot valleys high mountains; freshwater biodiversity; environmental heterogeneity; dry-hot valleys
►▼ Show Figures 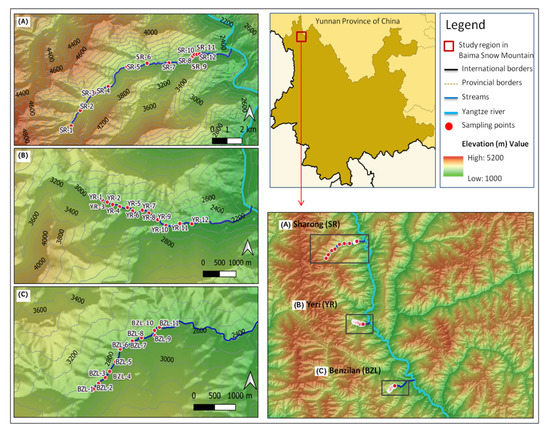